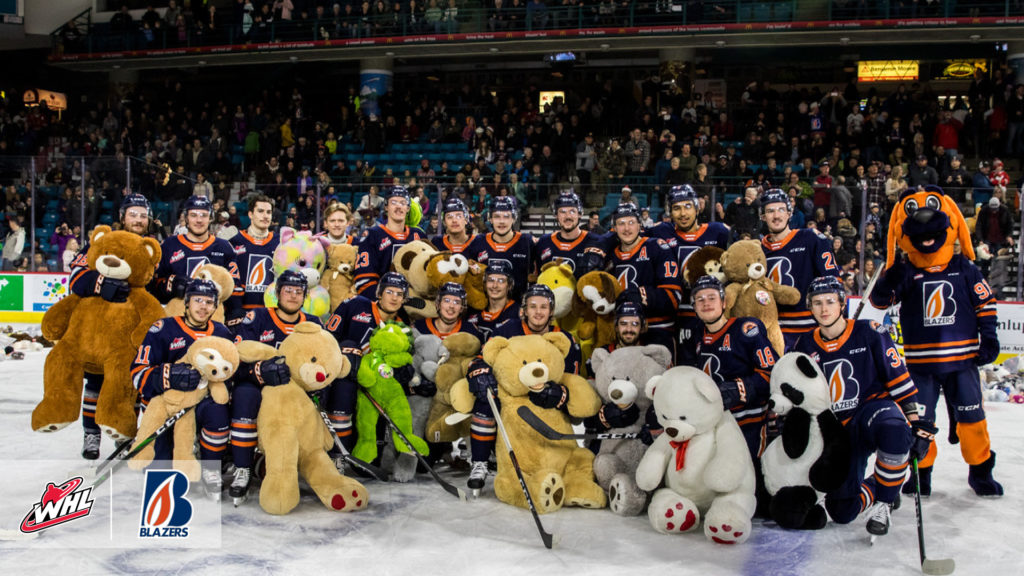 We sure miss watching Kamloops Blazers Hockey games around here! But we don’t need to forgo the incredibly generous and fun Teddy Bear Toss! While we will not be able to physically toss the bears and other stuffed animals onto the ice, we can still ensure that children in the Pediatric Department at Royal Inland Hospital (RIH) are comforted with a stuffed animal – by donating online at www.trellis.org/teddybeartoss2020.  Donations are accepted until midnight of December 15, 2020, and will be used to purchase much-needed teddy bears and other comfort items.

RIH is very grateful for the tremendous amount of stuffies donated in the past, thanks to the Kamloops Blazers’ Teddy Bear Toss. Every year, hundreds of stuffed animals have been brought to the arena by fans, and have been used to give comfort and security to a young patient.

Due to the pandemic and prescribed safety measures currently in place, RIH is unfortunately not able to accept physical items this year. However, RIH Foundation and Kamloops Blazers encourages community members to make a donation to ensure a young patient, who may need a friend during their time spent in hospital, receives one. The Pediatric Department’s stuffy inventory is running critically low, so the timing of the online Teddy Bear Toss is perfect. Please help us reach our goal of $5000 to restock, and bring joy to Kamloops and surrounding area’s youngest patients!

The Blazers started the Teddy Bear Toss tradition in 1993-94. The initiative took off within the league, and now all 22 teams in the WHL, along with minor pro hockey teams, host their own teddy bear tosses!

“We are proud to have an opportunity to continue the tradition of the teddy bear toss that the Kamloops Blazers started, and has since been adopted worldwide,” commented President/COO, Don Moores. “This is a tremendous opportunity to support the RIH Foundation and ensure that the tradition of the toss continues in a way that is safe for our community.”

About Kamloops Blazers
The Kamloops Blazers Hockey Club has a rich and successful history. The franchise came to Kamloops in 1981 and was known as the Jr. Oilers until 1984 before becoming the Blazers. The franchise is universally recognized and respected for helping develop student athletes in order for them to move on and play at the highest levels or pursue post-secondary education. The winning spirit of the club is evidenced by the six WHL Championship and three Memorial Cup banners that hang from the rafters at the Sandman Centre, the Blazers’ home rink.

About RIH Foundation
Royal Inland Hospital (RIH) Foundation was incorporated in 1983. Its mission is to inspire donors to give, and to build meaningful relationship to support the hospital and the community’s health care needs. The Foundation supports this mission through a variety of community fundraising activities including special events, legacy giving and charitable gifts from individuals, corporations and other charitable funding partners. Located in Kamloops, RIH is the only tertiary acute care hospital in the Thompson Cariboo Shuswap area, providing high-level, specialty medical care. It serves a catchment area of over 225,000 British Columbians. RIH is also an important training centre, including nursing students from Thompson Rivers University, pharmacy residents, and medical students from the University of British Columbia.