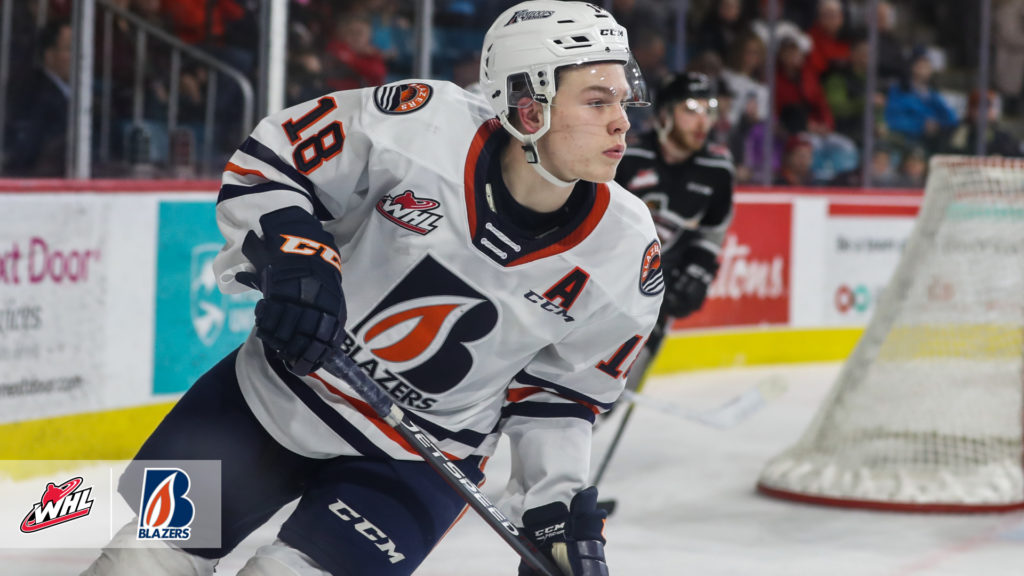 Connor Zary is one of the most intriguing prospects ahead of the 2020 NHL Draft.

The Kamloops Blazers centre offers a tantalizing mix of speed and skill, attributes that make the third-year skater one of the top producers in the Western Hockey League this season as evidenced by his 61-point showing through 41 contests. Chosen to participate in the 2020 Kubota CHL/NHL Top Prospects Game, the annual showcase provided the latest opportunity for Zary to impress as he shined under the national spotlight in wrapping up the night with a trio of assists to help lead Team White to victory.

Zary recently sat down with Junior Hockey Magazine to discuss the upcoming NHL Draft, his play at the CHL/NHL Top Prospects Game, and what attributes of his game make him stand out from the competition:

Junior Hockey Magazine: You’re the third-highest rated player from the WHL in NHL Central Scouting’s Midterm Rankings. How does that sound to you hearing that?

Connor Zary: It sounds pretty good. Obviously you want to be a top guy any time you’re doing anything in sports, so it’s pretty good to get my name up there in those rankings.

CZ: I think you try not to think about your draft year too much. There is going to be a lot of pressure and a lot of people asking questions. I think you just focus your mindset on playing your game, but when you do see things pop up on your phone or hear people talking about where you’re ranked, it motivates me to want to keep playing better and rise up and prove to people that that’s where I belong or that I belong higher.

JHM: How do you describe yourself and who do you compare yourself to in terms of a player in the NHL?

CZ: I look for myself to be a 200-foot centreman. I play with a lot of skill and smarts but I pride myself on my full two-way game. I think a guy I compare myself to is Bo Horvat, and I’ve gotten that from three or four scouts. That’s the one I kind of pay attention to a little bit more now that that’s what guys are talking about.

JHM: You had the opportunity to play at the Kubota CHL/NHL Top Prospects Game. It’s one of the biggest nights of the season. It’s not your typical all-star game in that guys are out there showcasing and that you want to perform against some of your best peers. You had three assists in that game for Team White. What was that entire experience like for you?

CZ: It was an awesome experience. I’ve had buddies I know go to (that game) and people I know, and I have always watched it on TV, so for me to this year get the chance to go was pretty special. It was an honour to just to be there and to put up a good night like I did helps my draft stock obviously. It was just a good, fun experience.

JHM: Your birthday is September 25. If you were born 10 days earlier, you would have been eligible for last year’s NHL Draft. Do you think having that extra year is actually beneficial for your development?

CZ: For sure. If I was in last year’s draft then some guys would have had nine months on me, so just getting that extra summer of training, an extra year of maturity in my game, and being able to show off my skills this year is beneficial to me as a player.

JHM: Where did your skating prowess come from? Is that something that just came naturally to you or did you work really hard at that?

CZ: I have worked really hard on it, especially the last few years. If you look back at me in peewee, or even the start of bantam, I don’t think you’d be saying that my skating was a strong suit for me, but over the last few years and over the last few summers getting stronger in the gym, power skating all summer, and working on new things to bring into my game has really helped my skating a lot. I enjoy playing a fast, skilled game, so it has helped me quite a bit.

JHM: You’re right around 6-feet, 180 pounds right now. Maybe 10 years ago, that could have been an issue. But given what you have seen in the NHL, and what’s happening with the entire trend to maybe a slightly smaller, more skilled, faster skater, does that encourage you to say I am coming into the NHL at exactly the right time?

CZ: I think so. There is so much room to get stronger and faster. Obviously I have only been 18 for a few months now, and I think there is lots of room to put on weight still and add strength, but as of now I am happy being 6-foot, 180 pounds. It is not so much about being 6-foot-4, 220 pounds anymore and coming in and trying to be a big body. I think it’s a fast, skilled game so trying to be a lean, fit player and staying healthy, there is so much time for that and it will help your game so much more.

JHM: How excited are you now with the NHL Draft quickly approaching?