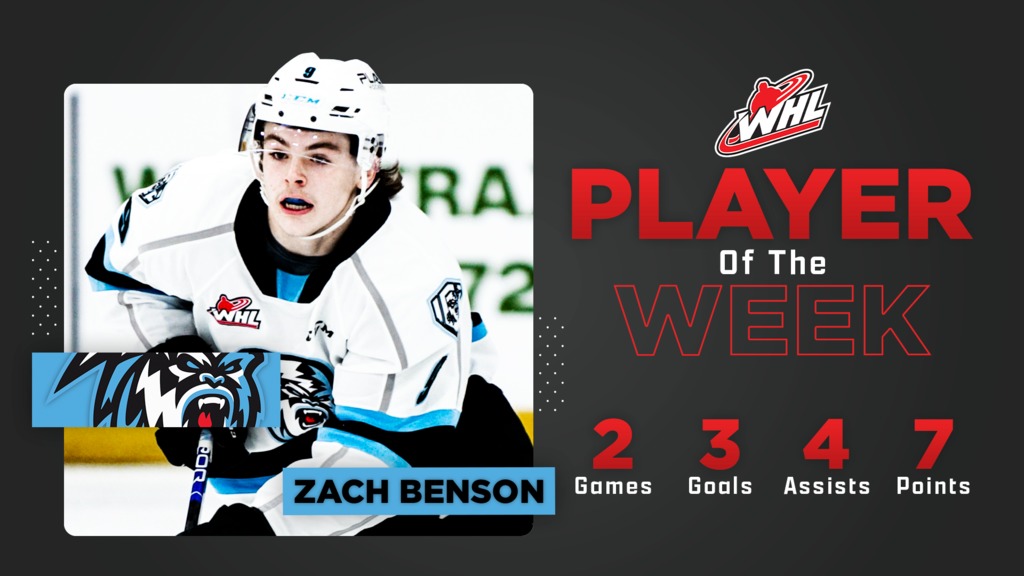 Benson, an ‘A’ rated prospect for the 2023 NHL Draft, recorded seven points (3G-4A) over his two appearances this past week, helping the ICE set a franchise record with its 15th consecutive victory in the process.

The 17-year-old, who hails from Chilliwack, B.C., started his week by scoring once and adding two assists Thursday, November 17 as Winnipeg outscored the Regina Pats 9-5.

He added two more goals and two assists in a rematch with the Pats Saturday, November 19 as Winnipeg swept the two-game series with a 5-2 triumph.

Benson begins the week in seventh place among WHL skaters with 33 points (13G-20A) and has registered three or more points in each of his last three contests.

Of the top 12 leading scorers in the WHL, he is one of eight players recently given an ‘A,’ ‘B’ or ‘C’ ranking by NHL Central Scouting ahead of the 2023 NHL Draft.

Originally selected by Winnipeg with the 14th-overall pick in the 2020 WHL Prospects Draft, Benson has amassed 139 points (57G-82A) over 118 regular season and playoff games.

Zach Benson and the Winnipeg ICE are next in action Tuesday, November 22, when they open a two-game home series versus the Lethbridge Hurricanes (7:05 p.m. CT, Wayne Fleming Arena).