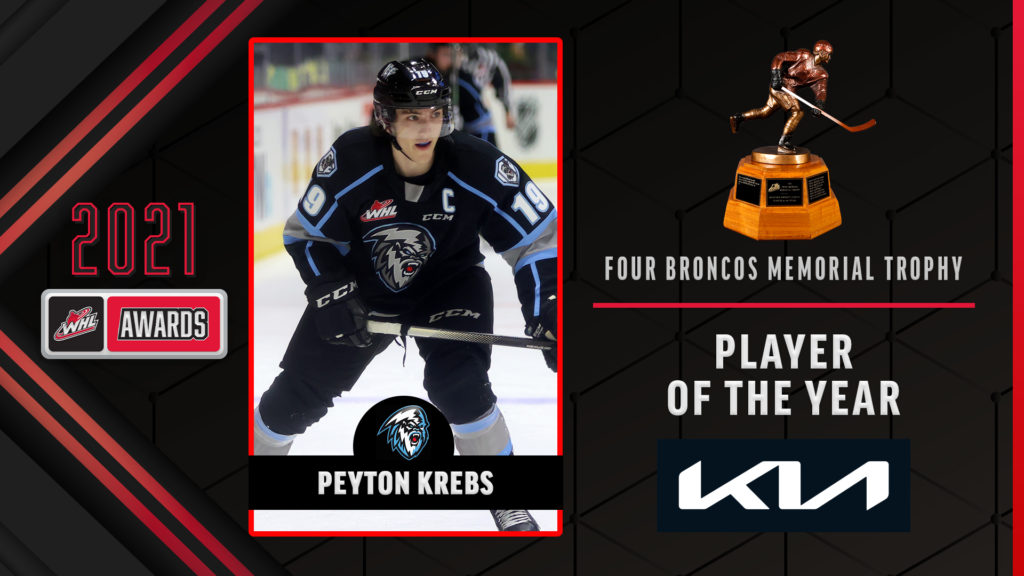 The Vegas Golden Knights prospect led the WHL in scoring during the 2020-21 season with 43 points (13G-30A) from 24 games played. He was named the winner of the Bob Clarke Trophy as WHL Top Scorer June 7, 2021. Krebs found the scoresheet in all but one of his games played during the 2020-21 WHL season as he set a new ICE franchise record by recording a 23-game point streak.

In addition to his league-leading assist and point totals, Krebs finished second among WHL skaters in power-play goals (eight) and tied for fourth in power-play assists (13).

“The Four Broncos Memorial Trophy is the most honourable recognition of a player’s commitment and outstanding achievement in hockey,” said Michael Kopke, Director of Marketing for Kia Canada. “We congratulate Peyton Krebs for winning the Player of the Year award and we can’t wait to see more of him on the ice for years to come.”

Krebs has been a leading point producer for the ICE since recording an assist in his WHL debut November 16, 2016. In 199 WHL regular season games, he has totalled 231 points (62G-169A), including 26 power-play goals, two short-handed goals and 14 game-winning goals. The ICE originally selected Krebs with the first overall pick in the 2016 WHL Bantam Draft. He was selected in the first round, 17th overall, by the Vegas Golden Knights in the 2019 NHL Entry Draft.