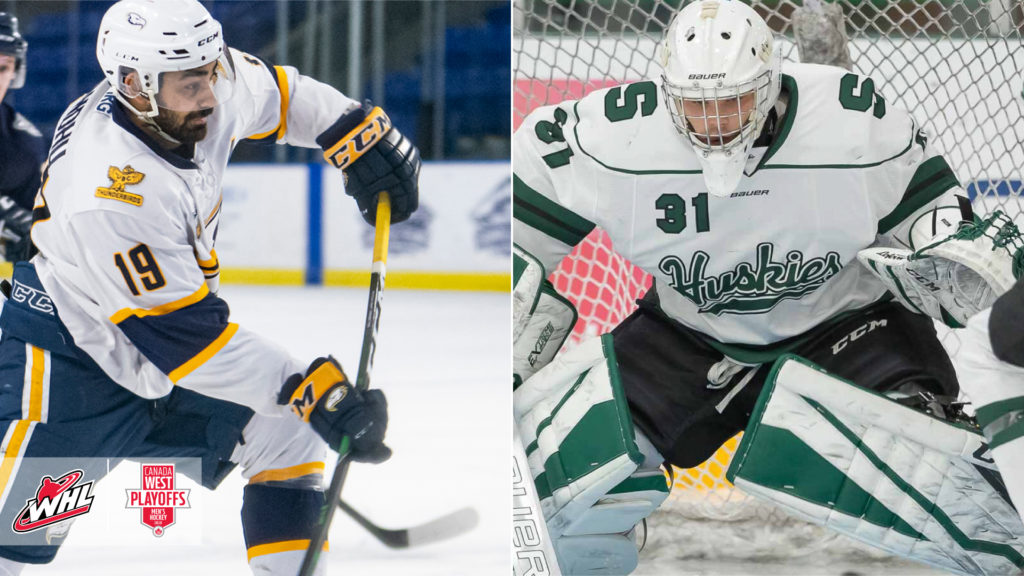 UBC Thunderbirds at U of A Golden Bears

Game one recap: Both teams came out flying in game one with scoring chances coming at both ends. With the scores leved at zero after the first period, former Portland Winterhawks forward Matt Revel opened the scoring. The Golden Bears would answer with two of their own from a duo of WHL Alumni as Dalton Hamaliuk and Cole Sanford both notched goals. Before the end of the period, UBC would tie the game on a power-play goal from WHL Alumni Colton Kehler.

Neither team could break the tie in regulation and UBC would take the match in overtime on a goal from former Seattle Thunderbirds captain Jerret Smith. UBC goaltender and former Thunderbird Rylan Toth stood tall, making 51 saves in the win.

Game two recap: After falling just short in the first match, the Golden Bears put on a dominant performance Saturday. Two WHL Alumni potted twice each for the Golden Bears with Cole Linaker and Curtis Miske playing a big part in the win. Another big role in the Golden Bears win was their success on the power play. Three of the six goals would come on the man advantage with all coming from WHL Alumni. Notching the lone goal for UBC was Carter Popoff. The Golden Bears took the match by a final score of 6-1.

Game three recap: With the series tied, both team’s best efforts came on Sunday evening in the win-and-in semifinal match. Right off the opening faceoff, the Golden Bears showed why they finished as the top-ranked team in Canada West, forcing a big save out of Toth. The Golden Bears opened the scoring at 6:44 into the first after Medicine Hat Tigers alumni Steven Owre beat Toth five-hole. The Thunderbirds tied the game after a great solo effort from Jake Kryski set up Austin Glover for a tap-in goal.

UBC would set up the upset early in the third period after Tyler Sandhu put in the go-ahead goal. Kryski picked up his second assist of the game and UBC would pull off the memorable victory. With the win, the Thunderbirds make their first Canada West Finals appearance since 1978.

Game one recap: The Huskies and Dinos went toe-to-toe on Friday night with both team’s looking to book their spot in the Canada West Finals. The Huskies opened the scoring early on a marker from former Kootenay ICE forward Levi Cable. The Dinos would bounce back and even the match on a goal from Swift Current Broncos alumni Ryan Graham to tie the game. In the game where all three goals came in the first period, the Huskies would gain the lead back on a goal from WHL Alumni Collin Shirley. The Huskies would hold on for the 2-1 win.

Game two recap: The Dinos and Huskies would continue their strong play into the second game of their semifinals series on Saturday evening. Opening the scoring early was WHL Alumni Jeff Faith, who capitalized on a giveaway from the Dinos making it an early one to nothing game. The Dinos responded on a power-play marker from Kaden Elder who potted his third goal of the Canada West Playoffs. The Huskies would jump back ahead on a beautiful shot from former Thunderbirds forward Donovan Neuls.

After extending the lead to three, the Dinos mounted a comeback potting three straight goals to send the game to overtime. The team’s remained level after the first overtime period, however it was Carson Stadnyk who played the hero for the Huskies. After walking into the Dinos zone, the Everett Silvertips alumni beat the Dinos goaltender, booking the Huskies a ticket in the Canada West Finals for a third straight season.