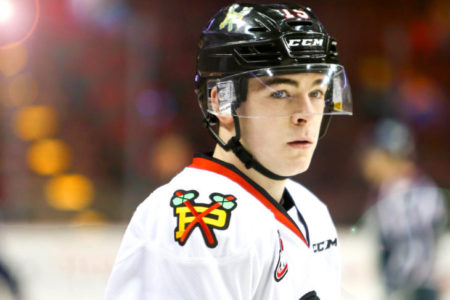 The Lethbridge Hurricanes continued to shuffle pieces in and out on Thursday morning, sending the WHL playing rights to goaltender Shane Farkas (1999) to the Portland Winterhawks in exchange for right winger Tanner Nagel (1998).

The 18-year-old Nagel brings with him 38 games of WHL experience – all of which came with the Winterhawks during the 2015-16 campaign. The 6-foot, 192-pound native of Mossbank, Sask., also spent time with the Battlefords  North Stars of the Saskatchewan Junior Hockey League in 2015-16, tallying six goals and seven points in 23 games.

Nagel was listed by the Winterhawks.

Farkas, who turns 17 in December, was drafted in the fourth round (67th) of the 2014 WHL Bantam Draft. He spent 2015-16 with the Okanagan Hockey Academy in the Canadian Sport School Hockey League and has since joined the West Kelowna Warriors of the British Columbia Hockey League.

For Lethbridge, the acquisition of Nagel comes on the heels of two trades earlier this week. The first saw defenceman Darian Skeoch (1997) and a conditional fourth round pick (2018) sent to the Vancouver Giants in exchange for defenceman Brennan Menell (1997). The second deal saw the Hurricanes ship overage forward Carter Folk to the Victoria Royals in exchange for a fourth round pick (2017).

The Hurricanes are in action Thursday night (7 p.m. MDT), as they take on the Kootenay ICE in Crowsnest Pass, Alta.

The Winterhawks wrapped up their 2016 pre-season slate with a 6-2 victory over the ICE back on Sept. 10. Next on the schedule is the regular season home opener on Saturday, Sept. 24 (7 p.m. PDT) when the Seattle Thunderbirds visit Portland.