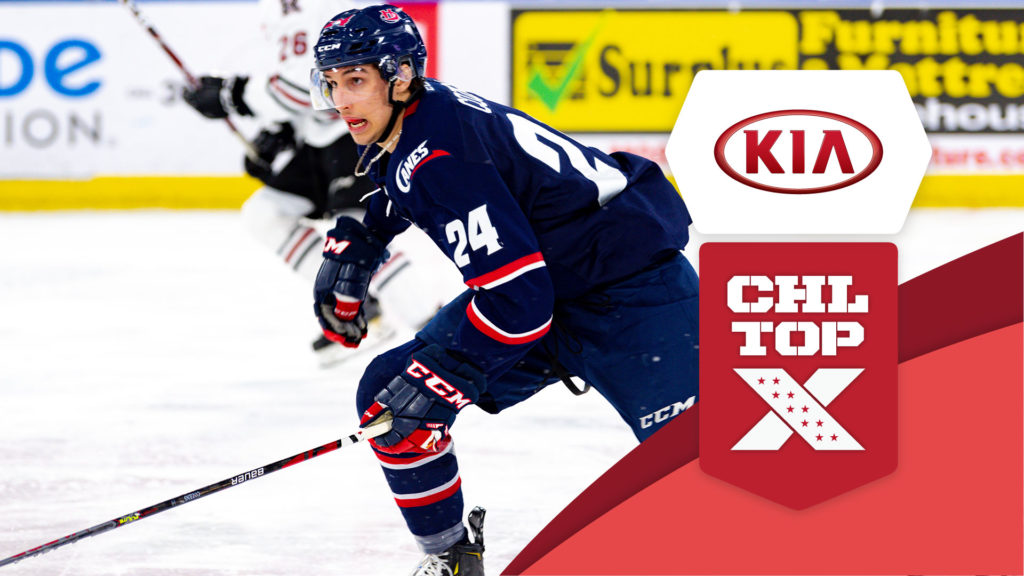 Toronto, Ont. – The Canadian Hockey League today announced the week 21 edition of the Kia CHL Top-10 Rankings for the 2019-20 season. The weekly rankings of the CHL’s Top-10 teams are selected by a panel of National Hockey League scouts.

For another week, the Portland Winterhawks retained the honour of the top-ranked Western Hockey League team, occupying the third position. Portland won both of their weekend road games against the Kelowna Rockets, earning a 7-3 win Friday and a 4-2 victory Saturday. Winterhawk captain and Florida Panthers defensive prospect Johnny Ludvig recorded five points (1G-4A) across the two games as part of a nine-point week that netted him WHL On The Run Player of the Week honours. The Winterhawks return home for their next contest, hosting the Spokane Chiefs on Friday, February 14 (7 p.m. PT) at the Moda Center.

Moving up a single spot to fourth, the Edmonton Oil Kings are rising in this week’s edition of the Kia CHL Top 10 Rankings. The Oil Kings’ lone game of the week provided plenty of excitement as 2020 NHL Draft prospect Jake Neighbours scored on a connecting play with 6.8 seconds left in regulation to top the Red Deer Rebels by a 2-1 score Friday. Tuesday, the idle Oil Kings became the second team to clinch a spot in the 2020 WHL Playoffs. They’ll welcome the Regina Pats to Rogers Place on Friday, February 14 (7 p.m. MT) for their next contest.

Holding steady in the seventh spot for another week are the Everett Silvertips. Taking on three U.S. Division opponents over the weekend, the Silvertips shutout the Tri-City Americans 5-0 and beat the Seattle Thunderbirds 5-2 before losing 5-3 to the Spokane Chiefs. Silvertip defenceman Jake Christiansen posted eight points (5G-3A) over the trio of games to lead his team in scoring throughout the road trip. Since returning to the WHL on Friday, December 6, 2019 Christiansen has recorded 38 points (17G-21A) in 25 games, leading all WHL defencemen and ranking in a tie for fifth in overall WHL scoring during that period. The Silvertips open up a five-game home stand at Angel of the Winds Arena when they welcome the Thunderbirds to town on Friday, February 14 (7:35 p.m. PT).

Moving into the Kia CHL Top 10 Rankings this week are the Lethbridge Hurricanes, who occupy the 10th spot. The Hurricanes won all three of their games, topping the Red Deer Rebels 7-6, beating the Prince Albert Raiders 3-1, and triumphing over the Calgary Hitmen by a 6-4 score. Five Hurricanes each recorded five or more points from the trio of games. The group was led by Buffalo Sabres prospect Dylan Cozens, who tallied seven points (1G-6A) and has posted 21 points (9G-12A) in 10 games since returning from the 2020 IIHF World Junior Championship. The Hurricanes will host the Winnipeg ICE for a pair of games this weekend beginning Friday, February 14 (7 p.m. MT) at the ENMAX Centre.