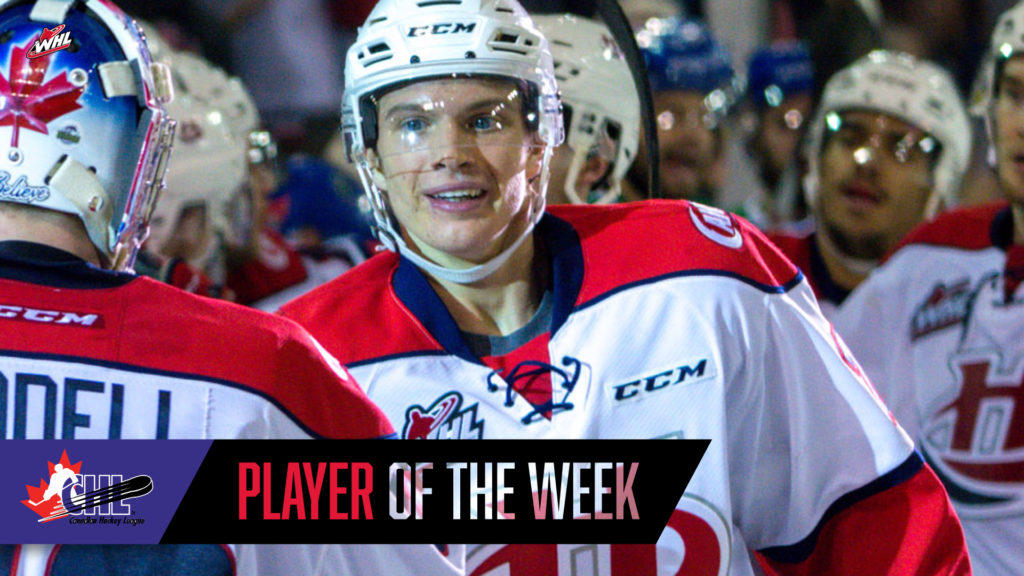 Toronto, ON — The Canadian Hockey League today announced that Los Angeles Kings prospect Brad Morrison of the Western Hockey League’s Lethbridge Hurricanes is the CHL Player of the Week for the playoff week ending April 29 after recording seven points (4G-3A) in three games with a plus-minus rating of plus-3.

Morrison becomes the first two-time award recipient during the CHL Playoffs for his efforts during the WHL’s Eastern Conference Championship Series against the Swift Current Broncos. Despite falling to the Broncos in six games, Morrison set a new team record for most goals in a single playoff and tied franchise leader Wes Walz for most points in a single post-season. His week began with a hat-trick and four-point performance in Tuesday’s Game Three on home ice where he earned first star honours in the 5-1 victory.  The Hurricanes tied the series with another 5-1 win in Game 4 on Wednesday with Morrison contributing two assists. That would be as close as the Hurricanes would come skating to a 4-3 loss in Game 5 on Saturday with Morrison scoring once, followed by the Game 6 series finale on Monday with a 5-1 Broncos victory.

A 21-year-old from Prince George, B.C., Morrison finished his five-year WHL career in Lethbridge after being acquired by the Hurricanes from the Vancouver Giants midway through the 2017-18 campaign.  He also spent four full seasons with his hometown Cougars who chose him seventh overall in the 2012 WHL Bantam Draft. This season, Morrison produced a career-high 75 points in 74 games which included 40 points in 32 games with the Canes, then added 16 goals and 21 assists for 37 points in 16 playoff games to lead all WHL scorers through three rounds. Earlier today, Morrison was signed to a free agent entry-level contract with the Kings.

Also considered for the award this week was Joseph Garreffa of the Kitchener Rangers with one goal and seven assists for eight points in four games against the Sault Ste. Marie Greyhounds in the OHL’s Western Conference Championship Series, and Ottawa Senators prospect Drake Batherson of the Blainville-Boisbriand Armada who scored three goals and three assists for six points in four games against the Charlottetown Islanders in their QMJHL Semi-Final series.