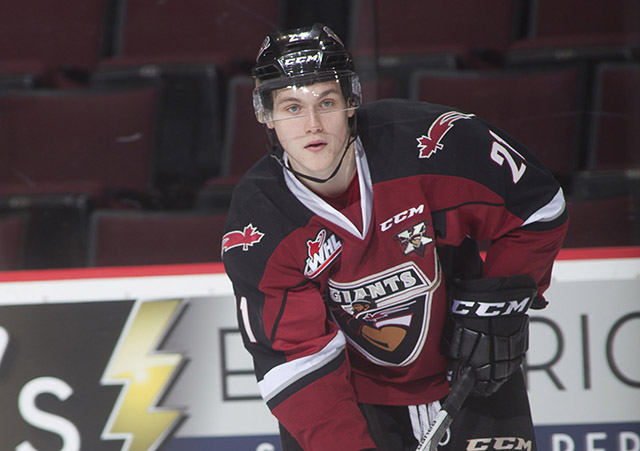 The Brennan Menell saga in Vancouver has finally come to an end.

Monday morning, the Vancouver Giants announced they had traded the 19-year-old puck-moving defenceman to the Lethbridge Hurricanes in exchange for 19-year-old defenceman Darian Skeoch and a conditional fourth round pick in the 2018 WHL Bantam Draft.

Menell left the Giants in November 2015, requesting a trade from the club, before eventually returning to finish out the season. In August 2016, Menell once again requested a trade from the Giants, and this time around he got his wish.

“We are very pleased with adding a quality player to our lineup like Brennan Menell,” said Peter Anholt, general manager of the Hurricanes, in a team release. “He can help us on the power play and can move the puck out of our zone. With the loss of [Arvin] Atwal and [Andrew] Nielsen, we felt we had to shore that up and he was available.”

Despite briefly leaving the Giants in 2015-16, the 5-foot-10, 187-pound Menell posted career highs in all major offensive categories, tallying seven goals, 46 assists and 53 points in 69 games. Over the course of two seasons and 126 games in Vancouver, the native of Woodbury, Minn., stacked up nine goals and 74 points.

Menell was not selected at the WHL Bantam Draft, signing with the Giants prior to the 2014-15 season. He is slated to participate in rookie camp with the NHL’s Philadelphia Flyers beginning on Monday, Sept. 19.

So thankful for the experience that the @WHLGiants gave me. I am very excited to get the opportunity to play for the @WHLHurricanes

As noted by Anholt, the Hurricanes found themselves a bit thin on the backend heading into the 2016-17 WHL season. While Atwal aged out, the 19-year-old Nielsen is expected to graduate to the professional ranks within the Toronto Maple Leafs organization after being selected in the third round (65th) of the 2015 NHL Entry Draft.

With the loss of Atwal and Nielsen, the Hurricanes return 17-year-old Nick Watson, 18-year-old import Igor Merezhko, 20-year-old Kord Pankewicz and 19-year-old Brady Reagan on the blueline. There’s a good chance 16-year-old Calen Addison – the club’s second overall pick from 2015 – could make the jump, but even so there is still plenty of room for Menell to take on a significant role with his new club.

While much of the focus around this deal will land on a fresh start for Menell, the Giants add the 6-foot-4, 220-pound bruiser Skeoch in the swap.

“The Vancouver Giants are excited to add Darian’s size, defensive strength and physical play to our lineup,” said Glen Hanlon, general manager of the Giants, in a team release. “Aside from his on-ice contributions, Darian also brings leadership and a great attitude.”

The 19-year-old native of New Liskeard, Ont., suited up in 59 games during his WHL rookie season in 2015-16, scoring once while adding six assists and 106 penalty minutes. He also skated in four post-season games with the Hurricanes, going without a point.

Skeoch is headed for Anaheim Ducks Rookie Camp in California, which is scheduled for Sept. 15-21.

“I’m super excited,” Skeoch said of joining the Giants, in a team release. “It’s a great opportunity and I look forward to getting to Vancouver as soon as possible.”

Thanks for everything over the past year @WHLHurricanes. Honoured and excited to be joining the @WHLGiants

“Darian has been nothing short of a great warrior here for the Hurricanes,”  Anholt said. “It’s not an easy deal to do. He’s worked himself to a point where he’s really created some value for himself and he was one of our hardest workers on any given day. We certainly wish him all the best.”

Skeoch was originally drafted by the North Bay Battalion in the 14th round (270th) of the 2013 OHL Priority Selection.

The Giants return to action Friday, Sept. 16 (7:05 p.m. PDT) when they visit the Kelowna Rockets.

Next action for the Hurricanes comes Thursday, Sept. 15 (7 p.m. MDT) from Crowsnest Pass, Alta., when they take on the Kootenay ICE.