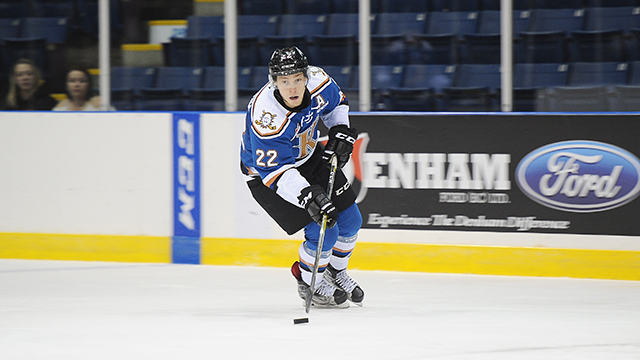 The Lethbridge Hurricanes have hooked two of the biggest fish available ahead of Tuesday’s WHL Trade Deadline.

“Our focus heading into this year’s Trade Deadline was to add to our complement of 1999-born players as well as a veteran forward who can be a two-year player for our club,” said Jeff Chynoweth, president and general manager of the ICE, in a team release. “Brett Davis provides youth and skill to our lineup, while Colton Kroeker will be a top-six forward.

“We are excited to add them both to our group. This is a trade that benefits both teams, and along with the draft selections, addresses our needs as we continue rebuilding for the future.”

Zborosky was one of the premier goal scorers expected to be available prior to the trade deadline. The product of Regina is tied for fifth in WHL goal scoring, with 28 tallies through 41 contests this year. He has 44 points to his name and is well on his way to breaking the career highs he set in goals (32) and points (68) last season with the ICE.

Originally a fifth round pick (105th) of the ICE at the 2011 WHL Bantam Draft, Zborosky has come into his own in recent seasons and has 173 points (86G-87A) to his credit in 237 career WHL regular season games.

“We thank Matt Alfaro and Zak Zborosky for all they have done for our club both on and off the ice over their four years in Cranbrook,” Chynoweth said.

With Alfaro and Zborosky landing in southern Alberta, Lindgren is off to Speedy Creek.

“Lindgren is a terrific player and makes our hockey club better,” said Manny Viveiros, head coach and director of player personnel for the Broncos, in a team release. “We’re thrilled to have Ryley join the Swift Current Broncos and be an impact player.”

Originally a fifth round pick (96th) of the Brandon Wheat Kings at the 2011 WHL Bantam Draft, Lindgren has struck for 136 points (56G-80A0 in 229 career WHL regular season games.

In Dyck, the Hurricane receive a high-end prospect out of the 2016 WHL Bantam Draft class. The 5-foot-8, 134-pound forward is a hometown kid hailing from Lethbridge and is enjoying a great year with the Lethbridge Minor Midget Hurricanes, having scored 41 points (10G-31A) in 18 games.

The Hurricanes wished to thank Davis, Kroeker and Lindgren for all their contributions, both on and off the ice.

That quickly covers the change of scenery in Lethbridge. What does this all amount to for the rebuilding Kootenay ICE?

Davis, a 6-foot-1, 181-pound product of Oakbank, Man., is eligible for the 2017 NHL Draft and was ranked as a ‘C’ prospect on NHL Central Scouting’s ‘Players to Watch’ list. With 11 points (7G-4A) through 29 games, the 17-year-old youngster has established career highs in this his second WHL campaign.

In 85 career WHL regular season games, Davis has 21 points (12G-9A) on his record after being selected in the fourth round (78th) of the 2014 WHL Bantam Draft. He stands to step in and have both an immediate and long-term impact for an ICE club that is rebuilding within the Central Division.

Lindgren is expected to make his Broncos debut Wednesday when the ICE visit Swift Current, while Alfaro and Zborosky are expected to debut with the Hurricanes on Wednesday in Edmonton.