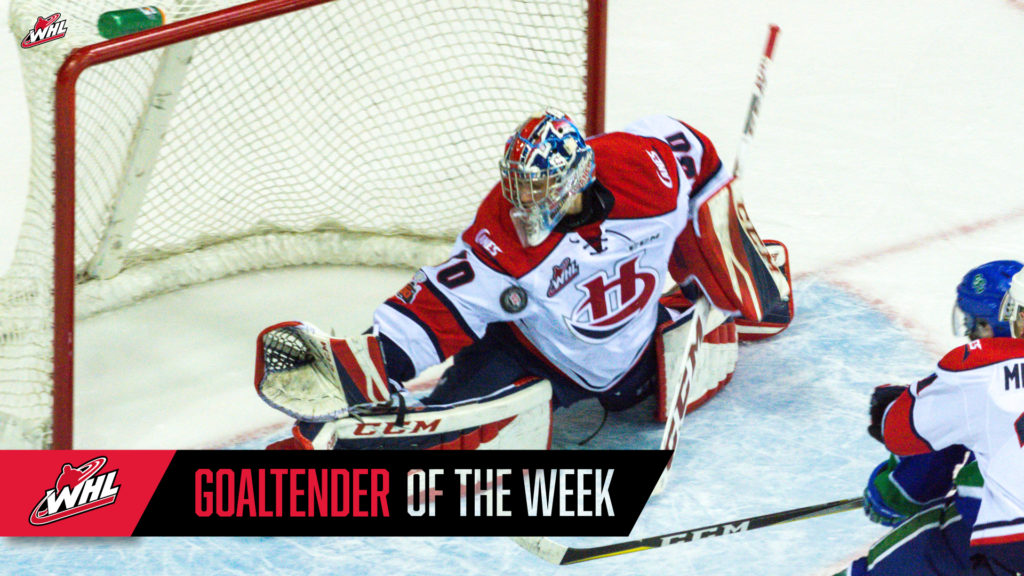 Flodell maintained a 2-1-0-0 record, 2.05 goals-against-average and stopped 76 of 82 shots for a .927 save percentage as the Hurricanes continued to battle the Swift Current Broncos in the Eastern Conference Championship.

With the series shifting to southern Alberta, Flodell came up huge in Game Three and Four. In Tuesday’s Game Three, he had a 23-save performance in a 5-1 victory followed by a 25-save performance in another 5-1 victory the next night. Flodell earned third star honours in Wednesday’s Game Four victory, earning third star honours of the night across the WHL as well.

Flodell’s third game of the week featured a 28-save performance in a 4-3 loss to the Broncos in Swift Current. In the three games this week, the Broncos went 1-for-12 on the power play with Flodell in net.

Flodell was originally selected in the third round, 47th overall, by the Seattle Thunderbirds in the 2012 WHL Bantam Draft. Throughout the regular season portion of his WHL career, Flodell maintained a 86-53-12-1 record, 2.92 GAA, .908 SV% and nine shutouts.

Trailing 3-2 in the series, Flodell and the Hurricanes will take to the ice Monday, April 30, 2018 (7:00 p.m. MT) for Game Six of the Eastern Conference Championship between the Hurricanes and Broncos at the Enmax Centre in Lethbridge, Alta.