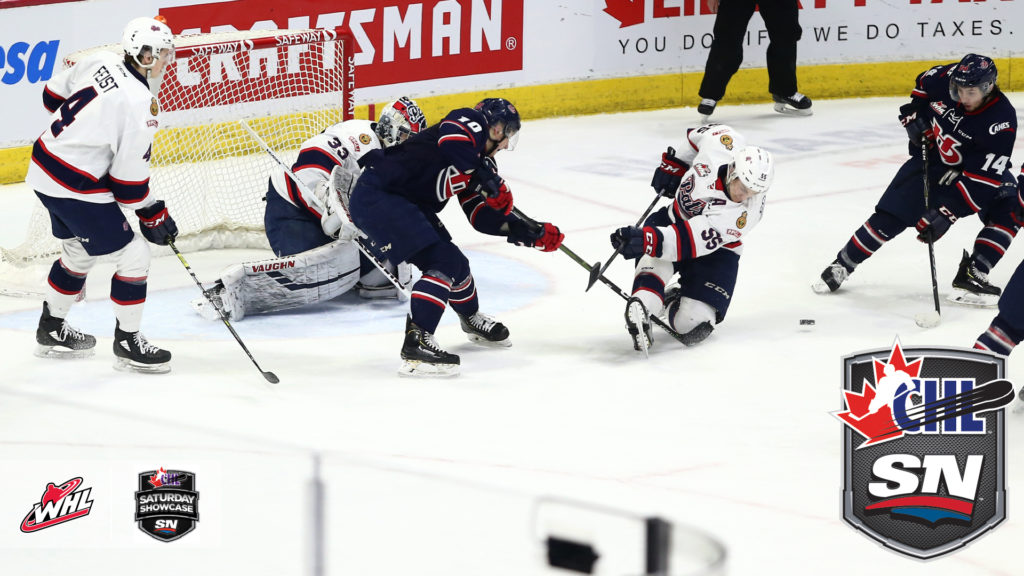 Though the first and third periods were scoreless on Sportsnet’s Saturday Showcase, the Lethbridge Hurricanes gave the Regina Pats and rest of the Western Hockey League an example of the damage they could do in 20 minutes.

Four goals in the second period started by former Pat Nick Henry (Colorado Avalanche) led the visiting Hurricanes to a 4-1 victory at the Brandt Centre in Saskatchewan’s capital this afternoon.

Henry initiated the scoring as captain Jordy Bellerive (Pittsburgh Penguins) sprung him up on a two-on-one with teammate Calen Addison (Pittsburgh Penguins). Streaking down the wing, Henry elected to keep and shoot, wiring the puck past Max Paddock for the game’s first goal.

Just 53 seconds later, Henry returned the favour to his captain, feeding him a pass from the sideboards into the slot. The captain made no mistake in burying his 29th of the season past Paddock to double Lethbridge’s lead.

With 7:09 to go in the second, the Hurricanes made it 3-0 as Taylor Ross dished the puck to 2019 NHL Draft prospect Dylan Cozens in the slot. The top-rated prospect used his quick release to get the shot off instantly and into the back of the net.

The Pats would eventually answer back from the stick of their offensive leader as Austin Pratt tipped a Sebastien Streu point shot past Carl Tetachuk to put Regina on the board. Brady Pouteau also picked up a helper on the goal.

Lethbridge would have a great response though from their best story of the last month. Just 32 seconds after Regina’s goal, Ross forced the neutral zone turnover and broke in on a two-on-one with Cozens. After Cozens passed to Ross for the shot, the rebound from the save kicked out to a trailing Jake Elmer, who wasted no time in extending his goal-scoring streak to 12 games.

Like he had done in the first, Tetachuk silenced the Pats in the third, making 10 more saves to finish with 38 stops in his 20th win of the season. Paddock stopped 34 shots in a valiant effort for the Pats.

Ross would contribute a pair of assists while Cozens, Elmer, Bellerive, and Henry each had a goal and an assist. Addison chipped in a single helper in the win.