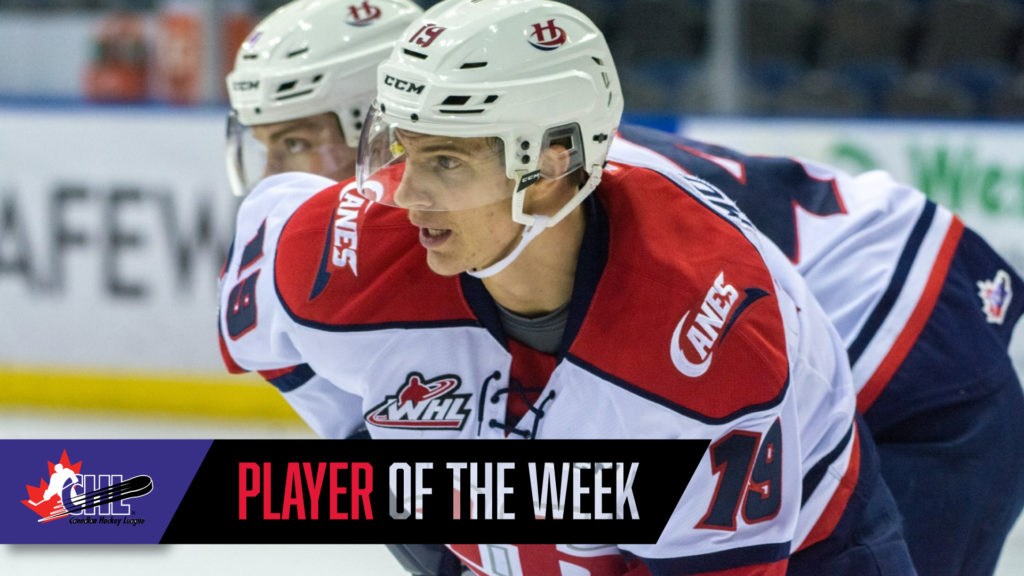 Toronto, ON – The Canadian Hockey League today announced that Brad Morrison of the Lethbridge Hurricanes is the CHL Player of the Week for the first week of playoff action ending March 25 after recording eight points in two games including three goals and five assists with a plus-minus rating of plus-4.

Morrison delivered back-to-back multi-point performances for the Hurricanes who opened the WHL Playoffs with a pair of victories against their Central Division opponent the Red Deer Rebels. In Game One on Friday night he scored once with an assist in a 6-0 shutout, then tallied a career-high six points in Game Two on Saturday with two goals including the game-winner plus four assists as first star of the 8-3 win.

A 21-year-old from Prince George, B.C., Morrison is finishing his five-year WHL career in Lethbridge and was acquired by the Hurricanes from the Vancouver Giants midway through the 2017-18 campaign. He also spent four full seasons with his hometown Cougars who chose him seventh overall in the 2012 WHL Bantam Draft. This season Morrison produced a career-high 75 points in 74 games which included 40 points in 32 games with the Canes.

The 6-foot-0, 171-pound forward has recorded 263 points (112G-151A) in 334 games. He had 30 power-play goals and 17 game-winning goals as part of those figures. Through the first four days of action in the 2018 WHL Playoffs, Morrison leads the league in assists and points while sitting in a five-way tie for fourth in goal scoring.

Also considered for the award this week was Columbus Blue Jackets prospect Vitalii Abramov of the Victoriaville Tigres who scored three goals and three assists for six points in two wins against the Gatineau Olympiques in first round QMJHL Playoffs action, and Arizona Coyotes prospect Noel Hoefenmayer of the Ottawa 67’s who scored twice with four assists for six points in a two-game split against the Hamilton Bulldogs to open the Eastern Conference OHL Playoffs.

Morrison and the Hurricanes will be looking to extend their advantage when the series shifts north for game three on Tuesday, March 27 (7:00 p.m. MT) at the Exmax Centrium.