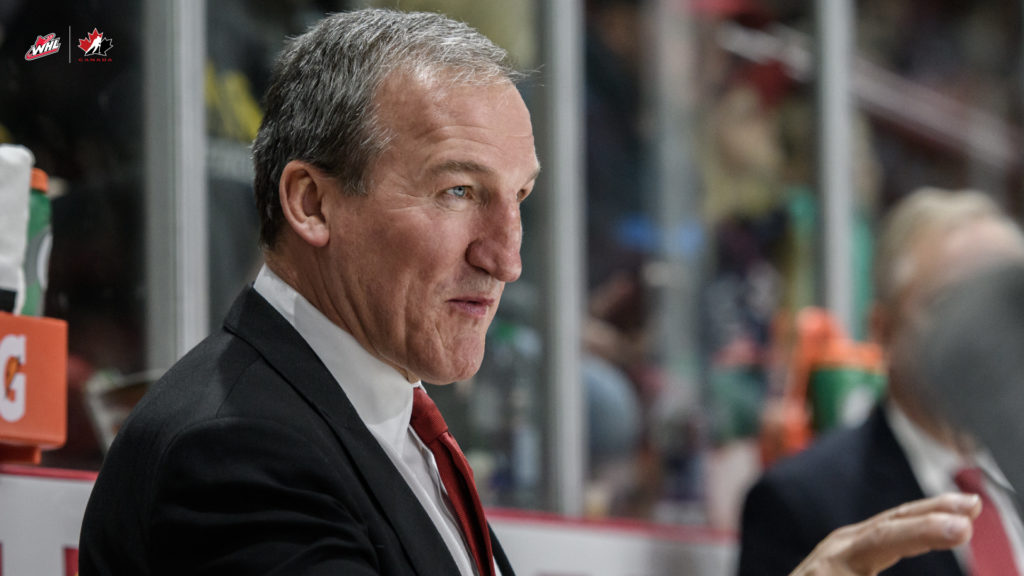 Calgary, Alta. – A pair of Western Hockey League head coaches will be behind the bench to lead Canada’s National Junior Team through the 2018-19 season and the 2019 IIHF World Junior Championship this December in Vancouver and Victoria, B.C.

Tim Hunter (Calgary, Alta. / Moose Jaw Warriors) will be part of the coaching staff for the third-straight year, taking the reins as head coach after previously serving as assistant coach the past two years. Rounding out the coaching staff is Brent Kisio (Calgary, Alta. /Lethbridge Hurricanes) while Marc-André Dumont (Montreal, Que. / Cape Breton Screaming Eagles) and Jim Hulton (Kingston, Ont. / Charlottetown Islanders) will occupy the other two spots on the bench.

“To be in a position to have familiarity in our coaching staff with Tim Hunter gives us the opportunity to again compete for a gold medal,” said Scott Salmond, Hockey Canada’s senior vice-president national teams. “Both assistant coaches have also had prior experience working within our Program of Excellence at various levels. Their experience and knowledge will help our players succeed in this prestigious international tournament.”

Hunter won back-to-back medals as an assistant coach with Canada’s National Junior Team, earning gold in 2018 and silver in 2017. He also won a bronze medal as head coach of Canada’s National Men’s Under-18 Team at the 2015 IIHF U18 World Championship. Hunter is coming off his fourth season as head coach of the Moose Jaw Warriors of the Western Hockey League, guiding the franchise to its first Scotty Munro Memorial Trophy as regular-season champion. Prior to joining the Warriors, he was an NHL assistant coach with the Toronto Maple Leafs, San Jose Sharks and Washington Capitals. Hunter has also served as the Head Coach for Team WHL at the past two editions of the CIBC Canada Russia Series, including guiding the team to a win last year in his home building of Mosaic Place in Moose Jaw, Sask.

As a player, Hunter appeared in 142 WHL regular season games with the Seattle Breakers, eventually being selected by the Atlanta Flames in the third round, 54th overall, of the 1979 NHL Draft. He suited up in 815 games over 16 seasons with the Calgary Flames, Colorado Avalanche, San Jose and Vancouver Canucks, capturing the Stanley Cup in 1989 with Calgary.

Kisio coached Canada’s National Men’s Summer Under-18 Team to a gold medal at the 2017 Ivan Hlinka Memorial Cup. He was also head coach of Team Canada White at the 2016 World Under-17 Hockey Challenge, and added a silver medal as an assistant coach with Team Pacific at the 2014 World Under-17 Hockey Challenge. Kisio just completed his third season as head coach of the WHL’s Lethbridge Hurricanes, guiding them to the Eastern Conference Championship Prior to joining the Hurricanes, he spent eight seasons as an assistant coach with the Calgary Hitmen, reaching the semifinal at the Memorial Cup in 2010.