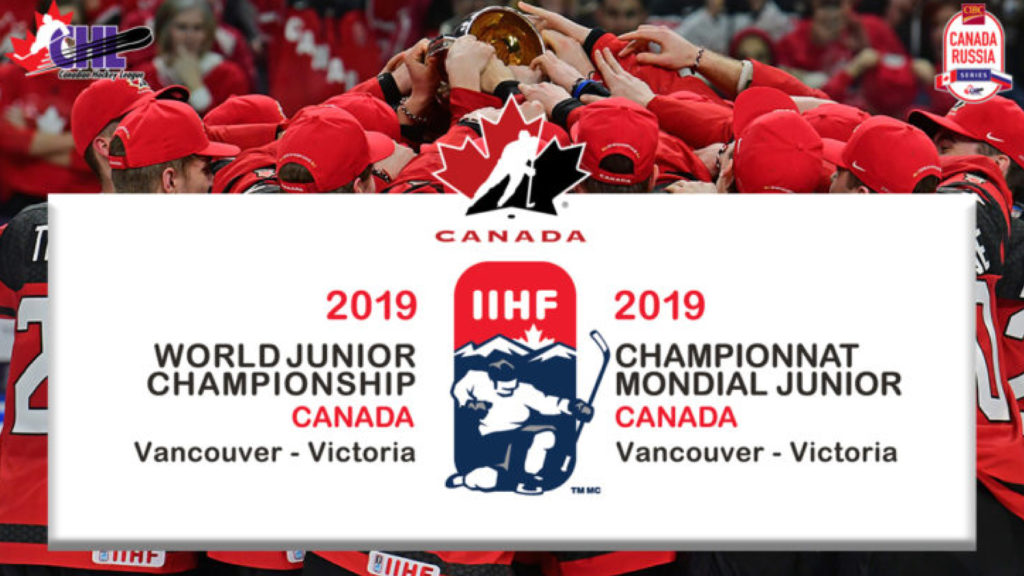 For the ninth time since 1999, the World Junior Hockey Championship will be played on home soil  with Vancouver and  Victoria serving as host this year.  A Canada-Russia clash almost always defines the final medal standings.

1999 @ Winnipeg
Canada gets outstanding goaltending from Roberto Luongo (Acadie-Bathurst Titan) but eventually succumbs 3-2 in overtime to a superior Russian squad. The tournament, played at six Manitoba sites but mostly at the old Winnipeg Arena, is a harbinger for bigger venues and crowds that come to define the tournament over the next two decades when it takes place in Canada. Slovakia, a team with many Canadian Hockey Leaguers, defeats Sweden for bronze, the country’s first medal in the competition.

2003 @ Halifax
Canada defeats the U.S. in a high-pitched semi-final to set-up another gold medal final against the Russians. Canada can’t hold a one-goal lead entering the third period and drops a close 3-2 decision. Combined with its win in the Czech Republic a year earlier, it was the Russians second consecutive gold medal and third in five years, all coming at Canada’s expense in the gold medal game. Finland defeats the United States to win the bronze medal.

2006 @ Vancouver
Coming off its first gold medal since 1997, Canada comes to Vancouver with a much different team than the star-laden one that had won in Grand Forks a year earlier. Harnessing the energy of home crowds, Canada skates to a 5-0 victory over Russia in the gold medal game. The tournament marked the beginning of quite a run for Canadian hockey in Vancouver:  The Giants won the Memorial Cup on home ice the following spring, and both the men’s and women’s team took gold at the 2010 Olympics. Finland beats the U.S. for bronze.

2009 @ Ottawa
Canada defeats Russia 6-5 in a shootout in the semi-finals after Jordan Eberle’s dramatic game-tying goal with 5.4 seconds remaining in regulation. That victory sets up a gold medal encounter with Sweden, who are led by both Erik Karlsson and Victor Hedman, but are no match for Canada, who skate away with a 5-1 victory. Cody Hodgson (Brampton Battalion), John Tavares (Oshawa Generals) and Eberle (Regina Pats) finish 1-2-3 in tournament scoring.

2010 @ Saskatoon
Incredibly, Eberle scores twice late in regulation to tie the gold medal game against the U.S. and send it to overtime. John Carlson of the London Knights ends Canada’s hopes of a sixth consecutive World Junior gold medal when he scores off the rush after Alex Pietrangelo (Niagara IceDogs) was stopped at the other end of the ice. Russia drops a quarter-final match against Switzerland in overtime and then loses in the fifth-place game to Finland.

2012 @ Calgary
Still smarting from Russia’s dramatic comeback in Buffalo a year earlier, Canada breezes through the round robin in Edmonton to set-up a rematch in the semi-finals. Canada stumbles early and often to fall behind 6-1 in front of a stunned crowd at the Saddledome. Canada rallies to score four goals in a five-minute stretch in the final frame but can’t get the equalizer. Russia later falls to Sweden in the gold medal game and Canada cruises by Finland to win bronze.

2015 @ Toronto
Canada goes undefeated in round robin play in Montreal. Shifting to Toronto for its elimination games, Canada storms through the quarters and semis, defeating Denmark and Slovakia by a combined 13-1 scoreline. Old rivals Russia await in the gold medal game, with Canada building a 5-1 lead. Russia mounts a comeback of their own, eerily like the one it held off by Canada three years earlier in Calgary. Canada hangs on to win 5-4 and win its first gold medal since 2009. Slovakia, in an identical result to Winnipeg 16 years earlier, beats Sweden for its second bronze medal in the tournament.

2017 @ Montréal
The tournament format takes place opposite to two years earlier with Canada based in Toronto to start. The hosts beat Russia but lose to the U.S. in round robin play, creating a more difficult road to the final. Despite getting progressively better each game and storming past Sweden in the semi-finals, Canada loses a heart-breaking gold medal encounter with the U.S. in a shootout. Thomas Chabot (Saint John Sea Dogs) has one of the greatest individual performances by a Canadian player in winning the tournament MVP. Russia beats Sweden for bronze.

Compiled for the CHL by Peter Robinson of Prospects Hockey