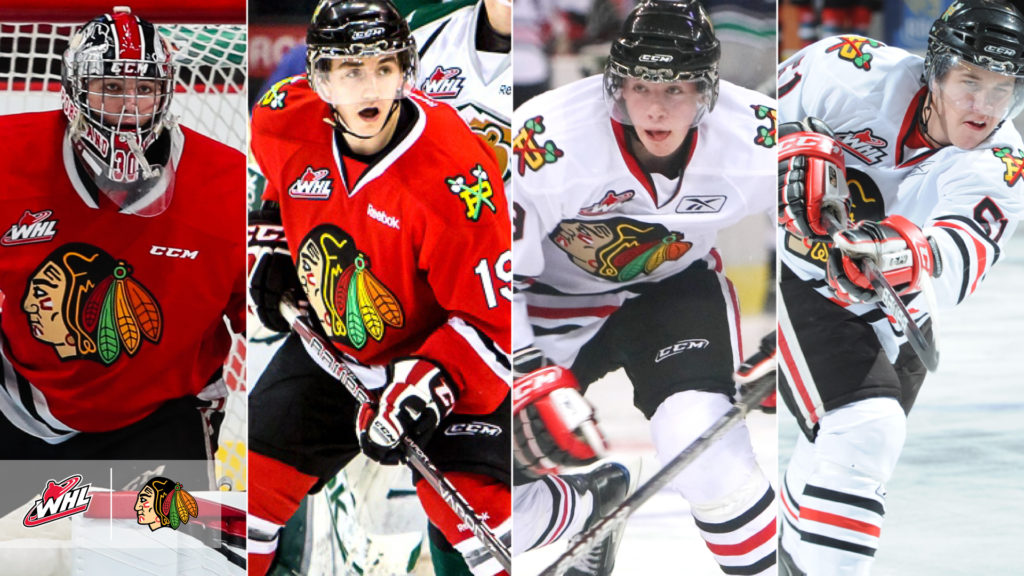 The Western Hockey League will be represented by six players from five WHL member Clubs on Canada’s National Junior Team at the 2020 IIHF World Junior Championship. In the lead up to the start of the tournament on Thursday, December 26 in the Czech Republic, the WHL will be taking a look through the lens of those five teams and some of their past contributions to Canadian entries at the tournament. Today’s profile focuses on the U.S. Division’s Portland Winterhawks.

As Canada goes in search of their 18th gold medal at the IIHF World Junior Championship this holiday season, they’ll have a boost in a talent with Joel Hofer of the Portland Winterhawks. The 19-year-old product of Winnipeg, Man. has blossomed into one of the top-tier goaltenders in the WHL this season, posting a 20-4-1-1 record, 1.81 goals-against average, 0.937 save percentage, and four shutouts in 27 games for a Winterhawks team that is challenging for the top spot in the U.S. Division, Western Conference, and the overall league standings.

Formerly a member of the Swift Current Broncos, Hofer won a WHL Championship as the team’s backup in 2018. Drafted that summer by the St. Louis Blues, Hofer has steadily raised his game, but will be making his debut on the international stage at the tournament. He guarded the crease for Team WHL in the 2019 CIBC Canada Russia Series, backstopping Canada to a clutch deciding shootout win after the sixth game of the series left the two teams in a tie.

This will mark the second-consecutive World Juniors to feature a member of the Winterhawks after Cody Glass represented Portland at the 2019 edition of the tournament in Vancouver and Victoria, B.C.

Winterhawks defenceman Gary Nylund posted four points (1G-3A) in seven games as Canada claimed the gold. That season was a career-best one for Nylund, posted 66 points (7G-59A) in 65 games, was named to the Memorial Cup All-Star team and was selected third overall by the Toronto Maple Leafs at the 1982 NHL Draft before going onto a 608-game NHL career.

2. During the first half of the 2010s, you’d be hard pressed to find a player who stood out more offensively in the WHL than Winterhawks Nicolas Petan. In addition to winning a gold medal at the Canada Winter Games and being crowned as a WHL Champion in 2013, Petan represented Canada at the 2014 and 2015 World Juniors.

While the experience of 2014 didn’t result in a podium spot for Canada, Petan was still one of Canada’s top-scoring skaters, notching five points (4G-1A) in seven games. Flash forward a year and Petan brought his offensive game to Canada’s successful bid for gold in 2015, finishing in a three-way tie for the team lead in scoring with 11 points (4G-7A) through seven games.

3. Brad Isbister appeared in 226 WHL regular season games with Portland throughout his WHL career and got his shot to represent Canada at the 1997 edition of the World Juniors in Switzerland. Capping off a run of five-consecutive gold medals, Isbister finished tied for the team lead in goals and points, posting seven points (4G-3A) throughout the tournament.

His final goal of the tournament proved to be an important one as he scored the insurance goal in the gold medal game as Canada claimed a 2-0 victory over the United States.

4. Though his time in the WHL was brief, Ryan Johansen filled the back of the net among the best of the other players on this list. His 161 points (65G-96A) in 134 WHL regular season games put him among some of the best to have played for the Winterhawks.

In the midst of his final season in the WHL, Johansen represented Canada at the 2011 World Juniors, earning a silver medal at the tournament. He also played a leading role offensively, posting nine points (3G-6A) in seven games.

5. Numerically, the Winterhawks enjoyed a strong showing at the 2014 IIHF World Junior Championship, with four players wearing the red and white for Canada. Nic Petan, Taylor Leier, Derrick Pouliot, and Mathew Dumba all suited up for Canada at the tournament in Malmo, Sweden.

Coupled with a pair of Winterhawks representing Canada in 2013 and another appearance by Petan in 2015 and it was a solid three years of showing for the Winterhawks on the international stage.