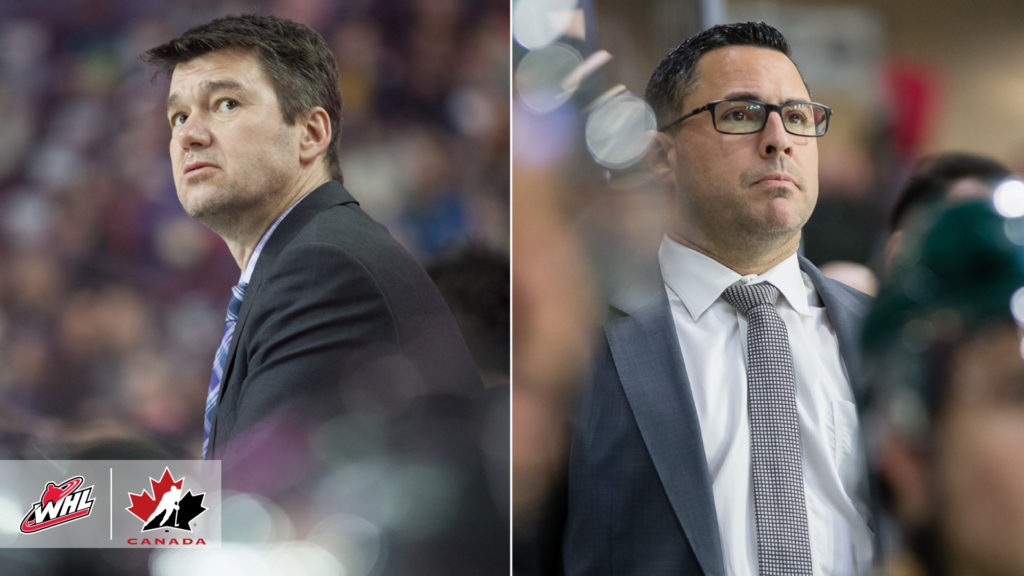 Calgary, Alta. – A pair of Western Hockey League head coaches will be behind the bench this summer with Hockey Canada at the 2019 Hlinka Gretzky Cup.

Vancouver Giants head coach Michael Dyck has been named the Head Coach of Canada’s Summer Under-18 Team following the departure of Dan Lambert, who has accepted an assistant coach position with the Nashville Predators of the National Hockey League.

Everett Silvertips head coach Dennis Williams had previously been named as an assistant coach for the team’s coaching staff and will continue to serve in the same role.

“It is a tremendous honour to once again have the opportunity to represent Canada internationally,” Dyck said. “We are looking forward to starting our preparation for the Hlinka Gretzky Cup this weekend.”

Under Dyck’s leadership, the Giants advanced to Game 7 of the 2019 Rogers WHL Championship Series and led the Western Conference during the regular season with a record of 48-15-3-2. He was named Western Conference Coach of the Year and helped guide the Giants to a winning percentage of .743, which was the second highest in the 18-year history of the franchise.

Before joining the Giants in 2018, Dyck had spent three seasons as an assistant coach with the Giants from 2002-2005. He also served as a head coach of the Lethbridge Hurricanes from 2005-2009.

This will mark the fourth occasion that Dyck has represented Canada internationally. He was head coach of Team Pacific at the World Under-17 Hockey Challenge in 2010 and 2012, won a silver medal with Canada at the 2016 Winter Youth Olympic Games. Provincially, Dyck coached Alberta to silver at the 2015 Canada Winter Games in Prince George, B.C.

Also joining Dyck on the coaching staff is Williams. With the Silvertips, Williams has guided the team to back-to-back U.S. Division titles. In his first year, Williams guided the Silvertips to a Western Conference Championship and their second-ever appearance in the Rogers WHL Championship Series. He was also a runner-up for the Dunc McCallum Memorial Trophy as the WHL Coach of the Year. Williams coached Canada Black at the 2018 World Under-17 Hockey Challenge.

In the coming months, more than 40 players will complete for a spot on Canada’s National Men’s Summer Under-18 Team during a week-long selection camp. Twenty-two players will be selected to compete at the 2019 Hlinka Gretzky Cup, set for Aug. 5-10 in Breclav, Czech Republic and Piestany, Slovakia.

For more information on Hockey Canada, the Program of Excellence or Canada’s National Men’s Summer Under-18 Team, please visit HockeyCanada.ca or follow through social media on Facebook, Twitter and Twitter.com/HC_Men.