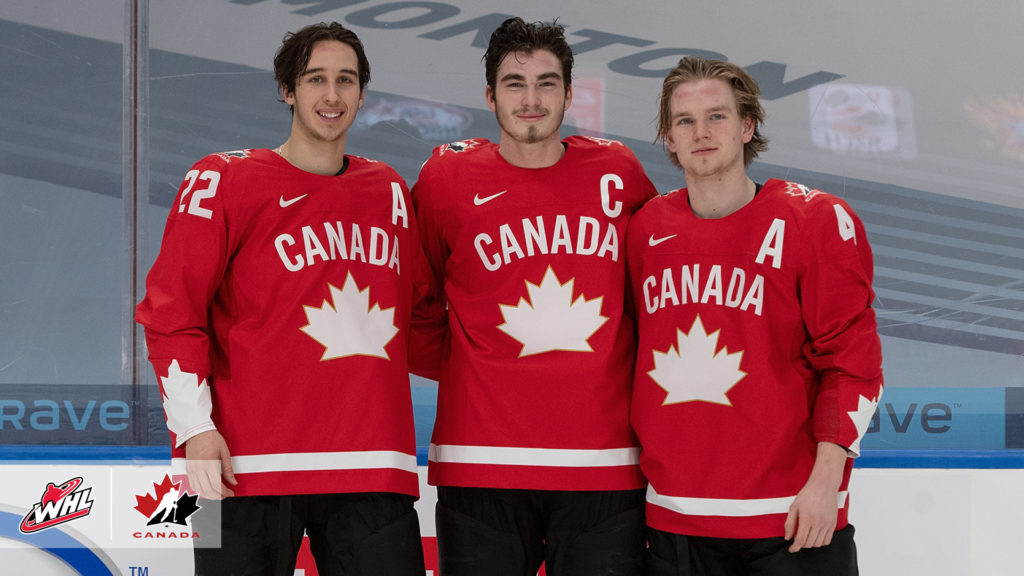 “These three players are all leaders in their own right, who have the respect of their teammates,” said Andre Tourigny, Head Coach of Canada’s National Junior Team. “Kirby has set a standard for himself through his commitment and determination, which is a great example for the others on our team. He has a strong desire to represent his country. Bowen and Dylan are veterans who know what it takes to win at this tournament, and their voices will be important in our leadership group.”

Selected second overall by the Blades in the 2016 WHL Draft, Dach enjoyed an outstanding WHL career, skating in 133 career regular season contests, amassing 129 points (38G-91A) from 2016-17 through 2018-19. He was then selected by the Chicago Blackhawks with the third-overall pick in the 2019 NHL Draft and went on to make his NHL debut as an 18-year-old rookie. He previously represented Canada Black at the 2017 World Under-17 Hockey Challenge and helped Canada secure gold at the 2018 Hlinka Gretzky Cup, hosted in Edmonton and Red Deer.

Selected third overall by the Giants in the 2016 WHL Draft, Byram has made a lasting impact during his WHL career, appearing in 188 career regular season games, tallying 150 points (46G-104A) from 2016-17 through 2019-20. Selected by the Colorado Avalanche with the fourth-overall pick in the 2019 NHL Draft, Byram led the 2019 WHL Playoffs in scoring, recording 26 points (8G-16A) in 22 games as the Giants advanced all the way to Game 7 of the WHL Championship. He previously represented Canada Red at the 2017 World Under-17 Hockey Challenge, capturing a silver medal. He represented Canada at the 2018 U18 World Championship and helped Canada secure gold at the 2018 Hlinka Gretzky Cup. In 2020, Byram was a member of Canada’s National Junior Team, which claimed gold in the Czech Republic.

Selected 19th overall by the Hurricanes in the 2016 WHL Draft, Cozens has established himself as one of the top modern-day players to emerge from the WHL, dressing in 179 career regular season games, notching 223 points (95G-128A) from 2016-17 through 2019-20. Selected by the Buffalo Sabres with the seventh-overall pick in the 2019 NHL Draft, Cozens was named WHL Rookie of the Year for the 2017-18 season. He previously represented Canada Red at the 2017 World Under-17 Hockey Challenge, capturing a silver medal. He represented Canada at the 2018 U18 World Championship, serving as an alternate captain. Cozens was also a member of Canada’s gold-medal winning team at the 2018 Hlinka Gretzky Cup. In 2020, he was a member of Canada’s National Junior Team, which claimed gold in the Czech Republic.

Including Byram and Cozens, the WHL will be represented by nine current WHL players along with Dach, a WHL Alumni, on Canada’s National Junior Team for the 2021 IIHF World Junior Championship in Edmonton.

The 2021 IIHF World Junior Championship begins on Christmas Day with three games before Canada kicks off its tournament schedule on December 26 against Germany at 4 p.m. MT. TSN and RDS, the official broadcast partners of Hockey Canada, will broadcast all 28 tournament games and the 10 pre-tournament games that begin December 20.

Learn how the captains’ signatures will be featured in Esso Medals and Certificates of Achievement program kits at https://t.co/9a7XDrpbSW pic.twitter.com/awOK4XYl71