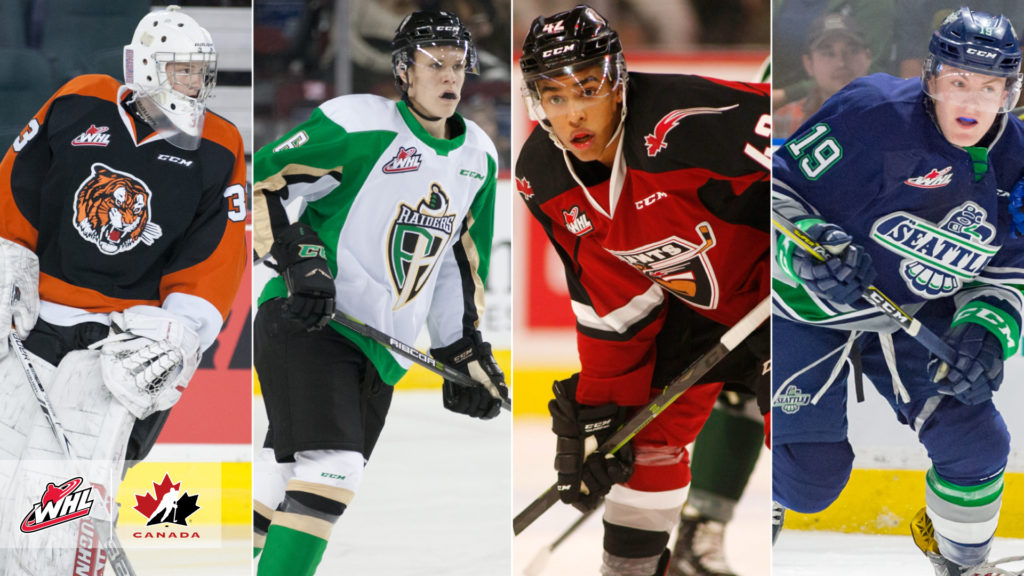 Calgary, Alta. – Hockey Canada announced its 66-player roster, including 19 players currently playing for or drafted by one of the Western Hockey League’s 22 Member Clubs, selected to represent Canada at the 2018 World Under-17 Hockey Challenge, set for Nov. 3-10 in Saint John and Quispamsis, N.B.

The 66 players will be divided into three teams – Team Canada Black, Team Canada Red, and Team Canada White – and will compete against the Czech Republic, Finland, Russia, Sweden and the United States in their quest for a gold medal.

Featured among the 19 WHL players named to the roster are 10 of the top 11 players selected from the 2017 WHL Bantam Draft, including first overall selection Kaiden Guhle (Sherwood Park, Alta. / Prince Albert Raiders). Overall, 14 of the 22 first-round selections from 2017 WHL Bantam Draft were named to the roster by Hockey Canada. In November 2017, six WHL players won silver as part of Canada Red at the tournament, held in Dawson Creek and Fort St. John, B.C.

“Any time you bring together the best young players in the country there are bound to be difficult decisions when selecting players, and we feel the 66 young men we chose exemplify the core values of the Program of Excellence,” said McEwen. “We believe that these players possess a willingness to learn and grow as they progress through our program and represent Canada, and give us the best chance to compete for a gold medal this November.”

The tournament opens Saturday, Nov. 3 at the qplex in Quispamsis when Finland takes on Sweden at 3:30 p.m. AT, followed by Team Canada Red, silver-medallist last year, facing off against Russia at 7:30 p.m. AT. The United States will kick off the action at Harbour Station in Saint John on Sunday, Nov. 4 when it plays the Czech Republic at 12 p.m. AT, followed by an all-Canadian match-up between Team Canada Black and Team Canada White at 4 p.m. AT.

TSN and RDS, the official broadcasters for Hockey Canada, will air both semifinals on Friday, Nov. 9, as well as the bronze- and gold-medal games on Saturday, Nov. 10; please check local listings for details. Media accreditation for the 2018 World Under-17 Hockey Challenge for Harbour Station in Saint John and qplex in Quispamsis can be requested online.

After a successful ticket launch, full-event ticket packages for the 2018 World Under-17 Hockey Challenge are sold out. A $99 Harbour Station ticket package is now available for purchase at the Harbour Station box office and includes all preliminary-round games in Saint John, as well as both semifinals and the bronze- and gold-medal games. Single-game tickets are also available for purchase starting at $13 at HockeyCanada.ca/Tickets.

The communities of Saint John and Quispamsis will receive the net proceeds from all ticket and ticket-package sales as a legacy of the event to support grassroots hockey within their communities as part of their hosting agreement with Hockey Canada. Additionally, recent editions of the World Under-17 Hockey Challenge have resulted in as much as $6 million in economic impact within the host communities.