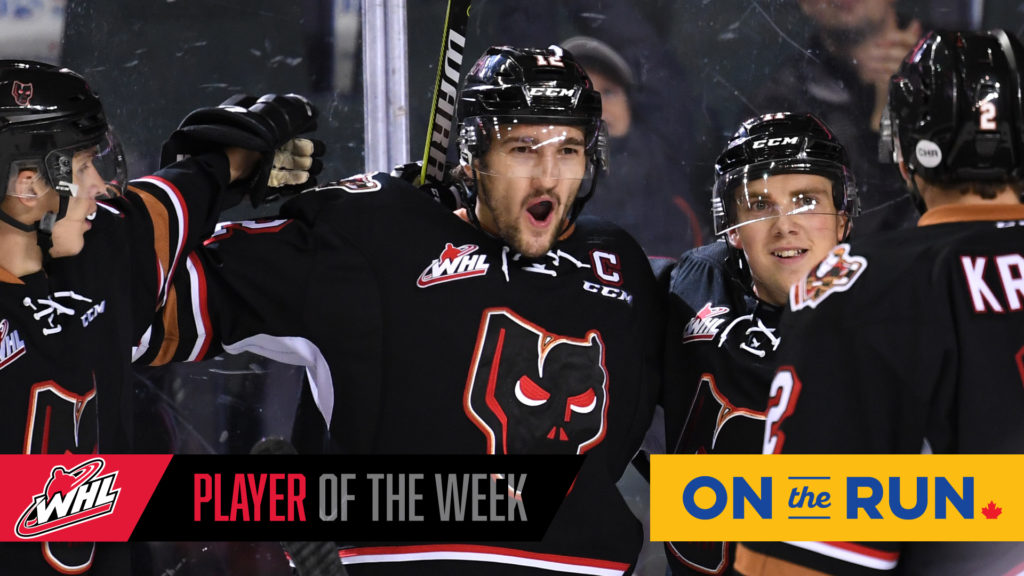 Calgary, Alta. – The Western Hockey League announced today that Calgary Hitmen captain Mark Kastelic has been named the WHL On the Run Player of the Week for the week ending October 21, 2018.

Kastelic recorded eight points (5G-3A) and a plus-two rating as the Hitmen’s winning streak hit three games during their road trip through the East Division, highlighted by a pair of multi-goal performances.

The captain’s week began with a goal and an assist in Calgary’s 8-4 loss to the Prince Albert Raiders, but quickly turned around in their next three stops. Wednesday against the Saskatoon Blades, Kastelic recorded an assist in his team’s 5-4 victory in overtime.

Two nights later against the Moose Jaw Warriors, Kastelic scored twice and added an assist in Calgary’s 5-1 win. Kastelic scored Calgary’s third and fourth goals in the contest while picking up a primary assist on his team’s first goal. His three-point performance earned him second star of the game honours.

Saturday in Brandon, Kastelic played a strong role in another overtime victory, scoring twice in a 4-3 victory against the Brandon Wheat Kings. Kastelic scored Calgary’s first goal, then notched the game-winning goal in overtime. His efforts earned him first star of the game honours as well as first star of the night honours in the WHL.

Originally selected in the second round, 41st overall, by the Hitmen in the 2014 WHL Bantam Draft, the 19-year-old Kastelic has led the Hitmen this season with 17 points (10G-7A) in 12 games, including five power-play goals, one short-handed goal, and two game-winning goals. Kastelic presently sits in a tie for 14th in WHL scoring.

Kastelic is the players from a non-East Division team to earn WHL On the Run Player of the Week honours this season.

The Hitmen will close out a five-game road trip when they head north to take on the Red Deer Rebels Tuesday, October 23 (7:00 p.m. MT).