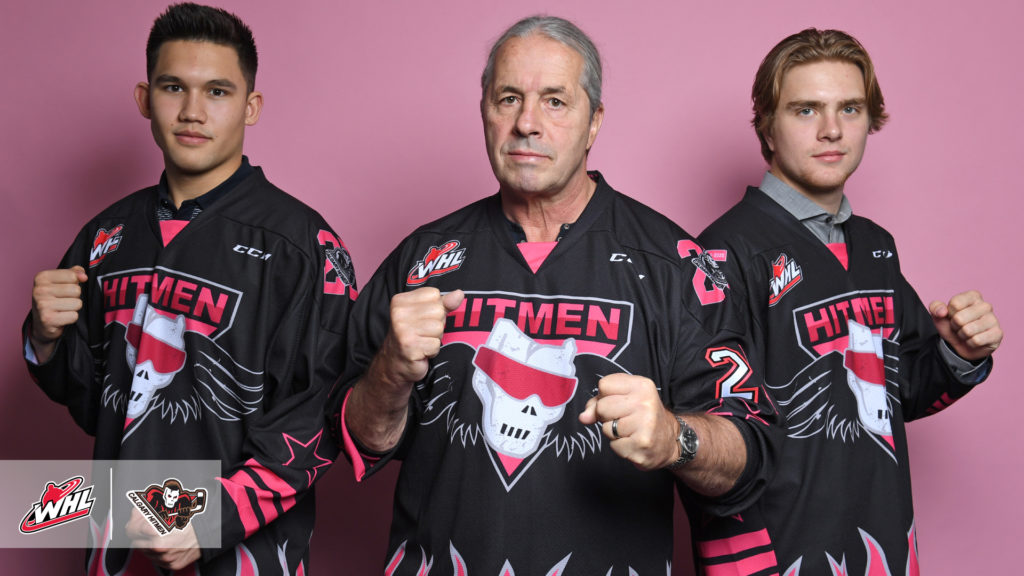 The limited-edition jersey honours the teams’ namesake with a black and pink design featuring a white Hitmen mask wearing Bret Hart’s trademark pink sunglasses. Inspired by his ring attire, the mask is flanked by black wings and topped with the Hitmen name in bold pink lettering. It is trimmed with pink flames along the bottom and, as a tribute to his iconic leather jacket, has three pink stripes below a pink star on each sleeve. In honour of the Hitmen’s 25th season in the Western Hockey League, the jersey also has shoulder patches with Calgary’s 25th anniversary logo in pink.

The unique jersey will make its one and only appearance on Saturday, November 2, when the Hitmen host the Saskatoon Blades for Bret ‘The Hitman’ Hart Night presented by Kal Tire. Puck drops at 7:00 p.m. for this charity game in support of the Calgary Prostate Cancer Centre.

Bret Hart jerseys and other merchandise including hoodies, hats, t-shirts and toques are on sale now and are available online at www.flamesport.com and at all FanAttic stores. A portion of all merchandise proceeds will be directed to the Calgary Prostate Cancer Centre.

Fans will also have the opportunity to bid on the Bret ‘The Hitman’ Hart-inspired uniforms at ElevateAuctions.com.  All jerseys will be game-worn and autographed by Bret Hart and the individual Hitmen player with the net proceeds donated to the Calgary Prostate Cancer Centre. Full auction details will be released November 2.

“Kal Tire is excited to partner with the Hitmen in support of this great community event,” said Ryan Paulson, Kal Tire Manager, Retail Marketing. “The important work of building awareness and raising funds for prostate cancer is something we are proud to stand behind. With Bret Hart personally supporting this effort to try to make it a big success, we felt it was a great opportunity for our Calgary teams to get involved and make a difference.”

The game will highlight how fans can pin prostate cancer including a pre-game concourse photo opportunity with Bret in his authentic WWE wrestling ring. All proceeds from the $20 photo-op, which includes a tax receipt, will be directed to the Calgary Prostate Cancer Centre. A special $15 ticket with $5 going directly back to Calgary Prostate Cancer Centre is available by going to the event page at http://www.prostatecancercentre.ca/bret-the-hitman-hart-night/. The MAN VAN will also be on the west tarmac promoting men’s health prior to puck drop, as well as on the concourse behind section 223 during the game.

“Prostate cancer is the leading cancer in men with one in seven to develop prostate cancer in their lifetime, that’s the bad news. The good news is that it is 95% treatable when caught early,” said Ken Rabb, MAN VAN Program Manager. “We encourage everyone to Get Checked! Having Bret Hart, a local hero, share his story and spread the word about early detection is a blessing. We are so thankful to have ‘The Hitman’ in our corner.”

Other highlights for the November 2 game include: