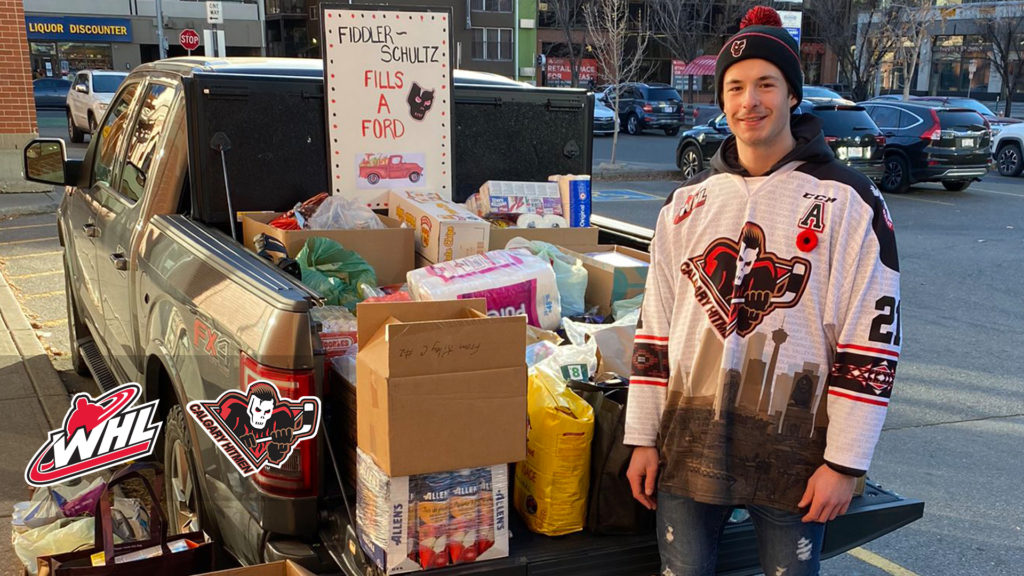 Calgary Hitmen forward Riley Fiddler-Schultz scored a hat trick Friday night against the Edmonton Oil Kings, but WHL nets weren’t the only thing the 19-year-old was filling this past weekend.

The pair also raised nearly $1,000 in funds, which along with the food will be donated to the Veterans Food Bank.

In addition to leading his Club in scoring this season with 15 points (6G-9A), Fiddler-Schultz has been creating a positive impact in his community since joining the Calgary Hitmen in 2018.

Two truck loads full, over 1600 lbs of food and close to $1000 donated to the Veterans Food Bank.

Fiddler-Schultz Fills A Ford was a great success.

Thanks to everyone who came out and donated! pic.twitter.com/Oaa4f0Ki8O

Fiddler-Schultz, who hails from Fort Saskatchewan, Alta., was awarded the Doug Wickenheiser Memorial Trophy in 2020 as WHL Humanitarian of the Year.

In addition to work with the Veterans Food Bank and the HEROSHockey program, he also created his own community program coined Fidds Friends. This program brought kids registered with the Boys & Girls Club of Calgary to Hitmen games throughout the 2019-20 WHL season. Attendees received tickets to a game, as well as parking and concession vouchers. Following each game, Fiddler-Schultz met with the kids as well as their guests for post-game photos and autographs. At its peak, Fidds Friends had 60 participants.