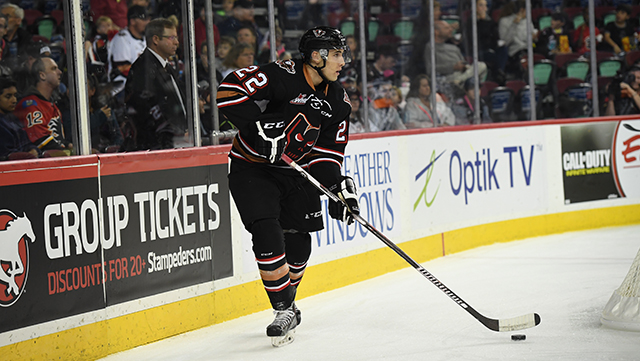 The Calgary Hitmen have  traded17-year-old defenceman Ty Prefontaine to the Lethbridge Hurricanes in exchange for a seventh round pick in the 2017 WHL Bantam Draft.

Prefontaine, a product of Saskatoon, Sask., has skated in 11 career WHL regular season games, including eight with the Hitmen.

“We would like to thank Ty for his time in Calgary,” said Mike Moore, Calgary Hitmen general manager, alternate governor and vice president of business operations, in a team release.

Prefontaine was originally a fifth round pick, 96th overall, of the Prince Albert Raiders at the 2014 WHL Bantam Draft. The Hitmen originally acquired Prefontaine along with forward Matteo Gennaro in a January 2016 trade that saw Layne Bensmiller and Loch Morrison shipped to Prince Albert.

Prefontaine is expected to be in the lineup for the Hurricanes Friday night.

In a separate transaction, the Hitmen announced the signing of 17-year-old defenceman Jameson Murray. The 6-foot-3, 175-pound product of Kelowna was added to the Hitmen’s protected list in the fall of 2015. He opened the 2016-17 season with the Okanagan Rockets of the B.C. Major Midget League, recording three assists in six games.

“We are also pleased to add James to our lineup,” Moore said. “He had a good training camp and has progressed well since then. We are excited about his development and opportunity with us and look forward to his contributions with our team.”

The Hitmen return to action Friday when they visit the Edmonton Oil Kings at Rogers Place. The Hurricanes are set to host the WHL-leading Prince George Cougars Friday at the Enmax Centre.