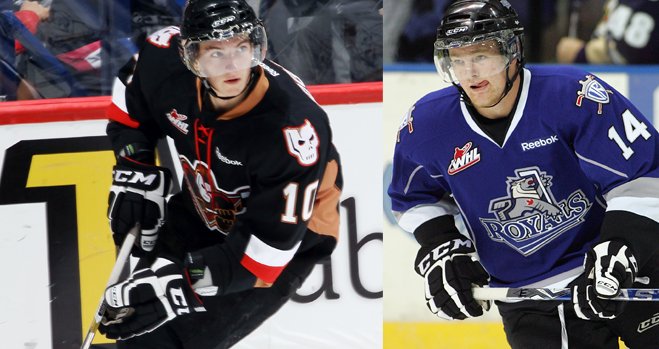 “Zane adds size to our group of forwards and improves our 18-year-old depth,” commented Hitmen Executive Vice President, Alternate Governor and General Manager Kelly Kisio.  “We would like to thank Alex for his time in Calgary and wish him success in Victoria.”

Jones, a native of Olds, Alberta, recorded 32 points, including 14 goals, and 64 penalty minutes over 68 games as a member of the Royals in 2011-12.  During the 2012 post-season, the 6-2, 192-pound, forward suited up for four playoff contests where he tallied one goal along with four penalty minutes.

Selected by the Chilliwack Bruins in the fifth round, 91st overall, in the 2009 WHL Bantam Draft, Jones has two points (1 goal, 1 assist) in four pre-season games this year.

Victoria, BC – The Victoria Royals today announced that the team has traded for import forward Alex Gogolev (1992) and a fourth round pick in the 2013 WHL Bantam Draft from the Calgary Hitmen. In exchange, the Royals have sent forward Zane Jones (1994) and a conditional sixth round draft choice to the Hitmen.

Gogolev played his first season in the WHL last year after being selected by the Calgary Hitmen in the 2011 CHL Import Draft in the second round, 63rd overall. With the Hitmen, Gogolev collected 57 points (25g-32a) in 69 games of regular season play in 2011-12 to go along with a plus-17 rating. The Moscow, Russia native also registered four points (3g-1a) in five games during the 2012 WHL Playoffs with Calgary.

Gogolev also suited up for three games with Spartak Moscow of the Kontinental Hockey League (KHL) during the 2010-11 season. Spartak drafted the forward in the 2009 KHL Draft with their second round, 28th overall, selection.

In the 2009-10 season, Gogolev played 45 games for MHC Spartak, registering 44 points (13g-31a) in his rookie season. Gogolev was also selected to represent Russia at the 2009 World Under-17 Hockey Challenge tallying six points (3g-3a) in five games at the tournament en route to a silver medal.

Victoria sends forward Zane Jones to Calgary after the Olds, AB native spent the 2011-12 season with the Royals. Drafted by the Chilliwack Bruins in the fifth round, 91st overall, of the 2009 WHL Bantam Draft, Jones recorded 32 points (14g-18a) last season in 68 games as well as one goal and one assist in four games during the 2012 WHL Playoffs.