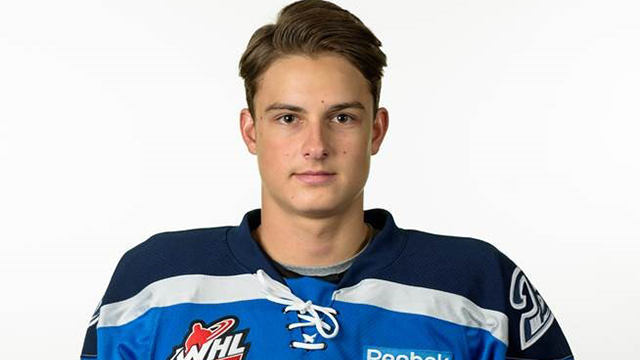 The Calgary Hitmen have acquired the rights to 2000-born defenceman Jonathan Tychonick from the Saskatoon Blades in exchange for a 2017 third round pick and a conditional first round pick.

Tychonick, a product of Calgary, was the Blades’ first round pick (12th) at the 2015 WHL Bantam Draft. He is committed to play for the NCAA’s University of North Dakota in 2018-19 and currently with the Penticton Vees of the BCHL.

“Jonathan is an elite talent in his age group and we are very excited to acquire his rights,” said Mike Moore, general manager and vice president of business operations for the Hitmen, in a team release. “We have watched Jonathan play at many major events, including the World Under-17 Hockey Challenge and the 2015 Western Canada U16 Challenge Cup, and every time he was one of the best players on the ice.”

Tychonick suited up for Team Canada White at the 2016 World U17 Hockey Challenge, registering four assists in six games.

“At this time, getting a guaranteed third round pick for Jonathan was in the best interest of our club,” said Colin Priestner, general manager of the Blades, in a team release. “We feel he belongs in the WHL one day, and if he is, his hometown team with a great organization like the Hitmen would give us the best odds of that happening.

“It he signs with them at any juncture we will also get a first round pick back and that would be the best-case scenario for all parties involved – he and his family, the Hitmen, the Blades and the WHL.”