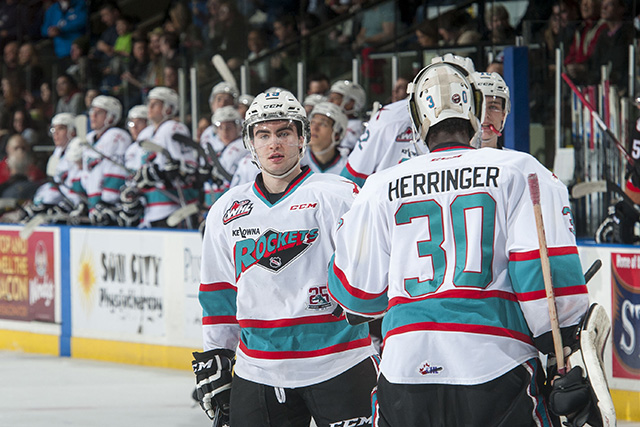 With eight games on the Western Hockey League pre-season slate Friday night, there is plenty to talk about heading into the weekend.

Peyton Krebs – the first overall pick of the Kootenay ICE at 2016 WHL Bantam Draft – scored in his first pre-season contest and NCAA decommit Nick Henry continues to show just how valuable he is going to be for the Regina Pats.

In the Western Conference, the Kelowna Rockets and Kamloops Blazers were up to their usual antics, with veteran goaltender Michael Herringer getting the last laugh.

Second-year Cougar Justin Almeida boosted his pre-season totals to four points in four games as he notched is first goal of the exhibition campaign to open the scoring midway through the second period.

After that, it was all Winterhawks as Colton Veloso and Alex Overhardt responded in the second before Tanner Nagel iced the victory with an empty-net insurance marker in the dying moments of the third period.

The Winterhawks came out triumphant despite going 0-for-7 with the man advantage, while Almeida’s marker came on the power play for the Cougars, who went 1-for-4 on the afternoon.

Goaltender Cole Kehler made 16 saves on 17 shots to earn the win for Portland. For Prince George, Ty Edmonds started the game, turning aside all 15 pucks sent his way. Taylor Gauthier – 2016’s ninth overall pick – came on midway and surrendered two goals on 13 shots to take the loss.

The Winterhawks improved to 4-0-1 with the win and will take on the Kootenay ICE Saturday morning (11 a.m. PDT) in Kennewick to close out their pre-season schedule.

The Cougars fell to 2-3-0 with the loss and will round out their pre-season docket on Friday, Sept. 16 (7 p.m. PDT) when they host the Kamloops Blazers in Prince George.

It looked as though the upstart ICE might steal one from the Thunderbirds, but Matthew Wedman had other plans.

Skating in his first WHL pre-season contest, Peyton Krebs tallied a short-handed goal with only 1:07 remaining in regulation to put the ICE ahead 3-2. But with the remainder of the power play, Wedman struck to tie the game and force overtime.

Veteran left winger Nick Holowko was the only man to find the back of the net in the shootout, beating 15-year-old ICE goaltender Jesse Makaj to give Seattle the win.

Returning forwards Dylan Stewart and Vince Loschiavo registered the other two goals for the ICE, while Tyson Terretta and Nolan Volcan struck for the Thunderbirds.

The ICE were blanked with the man advantage, going 0-for-4, while the Thunderbirds managed to produce on 1-for-6 power-play opportunities.

The ICE sit 0-0-2 and will take on the Winterhawks Saturday (11 a.m. PDT) in Kennewick. The Thunderbirds moved to 3-1-0 and will clash with the Tri-City Americans Saturday (7:05 p.m. PDT), also in Kennewick.

Moscow product Nikita Popugaev opened the scoring in the first period before tallying the game-winning goal in the second period as the Warriors edged the Wheat Kings in Brandon.

Popugaev’s second-period marker came on the power play, as the Warriors went 1-for-8 with the man advantage. The 6-foot-5, 202-pound Russian now has three goals and six points in two exhibition outings.

Brecon Wood, a 2015 seventh round pick, registered the other goal for Moose Jaw, while Connor Gutenberg and Tak Anholt replied for the Wheaties.

Brandon’s power play went 0-for-2 on the evening.

The Warriors improved to 2-2-0 in pre-season play and will host the Wheat Kings Saturday.

Micheal Zipp and Aaron Hyman scored back-to-back goals in the span of two minutes midway through the third period to boost the Hitmen to victory Friday in St. Albert.

Left winger Branden Klatt had given the Oil Kings a 3-2 lead with a power-play effort only 2:04 before Zipp tied the affair.

Import defenceman Vladislav Yeryomenko opened the scoring for Calgary, while veteran Carsen Twarynski tallied the other in the second period.

Veterans Jesse Roach and Tyler Robertson provided the other replies for Edmonton.

Goaltender Kyle Dumba turned in a complete game for the Hitmen, making 28 saves for the win. At the other end, veteran Patrick Dea made 22 saves on 24 shots through 40 minutes of action before 17-year-old Liam Hughes finished out the final 20 minutes by making nine stops on 11 shots.

Calgary was 1-for-6 on the man advantage, while Edmonton went 1-for-7.

The Oil Kings drop to 1-2-0 and travel to Calgary for a rematch Saturday night.

The two Okanagan rivals battled tooth and nail through more than 40 minutes of action before veteran Dillon Dube (pictured above with Michael Herringer) broke a scoreless tie 4:09 into the third period, giving the Rockets the only goal of the game.

Michael Herringer, 20, was perfect between the pipes, making 23 saves for the shutout victory. At the other end, Dylan Ferguson sparkled in defeat, making 39 saves.

Kelowna improves to 2-1-0 and will head to Kamloops for a rematch with the Blazers on Saturday (7 p.m. PDT).

Kamloops fell to 1-2-0 and plays host to the Rockets on Saturday.

If you don’t know the name Aleksi Heponiemi, you better educate yourself soon.

The Finnish import had himself another three-point night Friday, scoring once and setting up two others to propel the Broncos to a 4-3 win in Lethbridge. The native of Tampere now has five goals and 10 points to his name through four games to sit alone atop the WHL leaderboard.

It was Colton Kroeker opening the scoring in the first period for the Hurricanes, before Heponiemi, Lane Pederson, Glenn Gawdin and Max Lajoie scored consecutively to give the Broncos a 4-1 advantage.

Kroeker registered his second of the night midway through the third period and Russian winger Egor Babenko added another in the final minute to make it a one-goal game, but that’s as close as the ‘Canes got.

Travis Child made 23 saves to claim the victory for Swift Current, while Stuart Skinner allowed four goals on 30 shots between the pipes for Lethbridge.

The Broncos find themselves 3-1-0 and host Lethbridge on Saturday.

The Tigers threw everything and the kitchen sink, then a little more, at the Pats Friday night, firing 53 shots at the Regina cage en route to a 5-2 victory.

Ryan Jevne, Dylan MacPherson, import John Dahlstrom and Mason Shaw all scored before the midpoint of regulation, giving the Tigers a commanding 4-0 lead.

Austin Wagner got Regina on the board late in the second period, but Matt Bradley replied a mere 1:04 later – with only six seconds left on the clock – to restore the four-goal advantage for Medicine Hat.

Pats goaltender Jordan Hollett faced the entire onslaught from Medicine Hat, making 48 saves on 53 shots. For the Tigers, Nick Schneider was perfect on 17 shots to start the game before rookie Duncan McGovern took over and blocked 18 of 20 pucks sent his way.

The loss drops Regina to 2-2-0 in pre-season action. Next up, the Pats head home to host the Tigers in Regina on Saturday (7 p.m. MDT).

Medicine Hat jumped to 2-1-0 with the win and visits Regina on Saturday.

Brandon Hagel scored the game-winning goal with seven minutes remaining in the third period to give the Rebels a win in what was a back-and-forth contest with the Americans.

Imports Alexander Alexeyev and Michael Spacek, along with Grayson Pawlenchuk provided the rest of the scoring for Red Deer, while Vladislav Lukin, Kyle Olson and Michael Rasmussen responded for Tri-City.

Both teams found the back of the net twice with the man advantage, though the Americans saw eight opportunities to the Rebels’ five.

The Americans fell to 2-3-0 and will host the Seattle Thunderbirds Saturday evening (7:05 p.m. PDT).

Saturday in the WHL