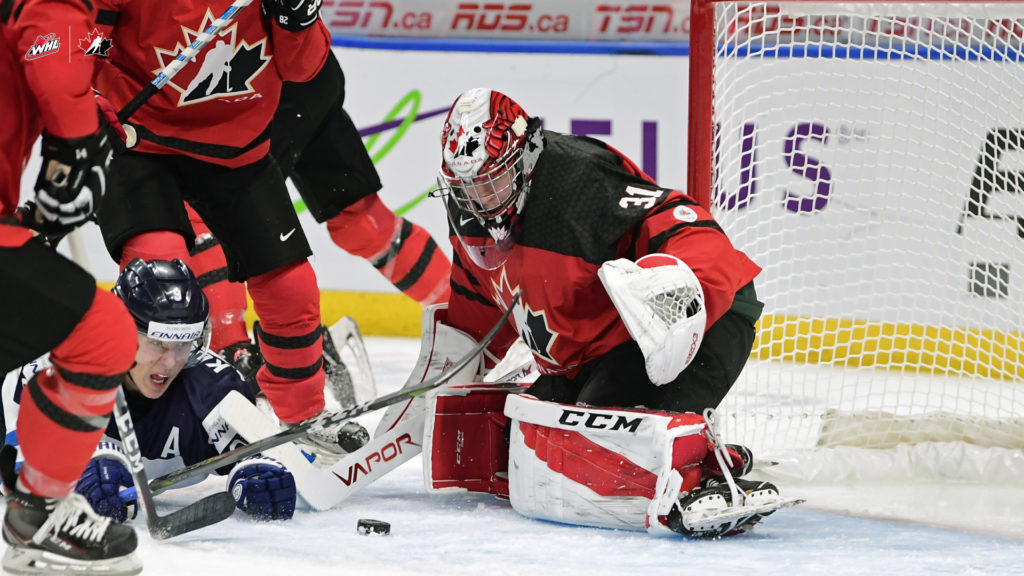 Canada began their quest for gold Tuesday at the 2018 IIHF World Junior Championship with a 4-2 win over Finland in Pool A action at the Key Bank Centre in Buffalo, N.Y.

Everett Silvertips goaltender Carter Hart (Philadelphia Flyers) stopped 29 of 31 shots, but Kelowna Rockets defenceman Cal Foote (Tampa Bay Lightning) may have come up with the biggest save of all, keeping Canada in control of the game.

Canada got the jump on their Scandinavian rivals 5:34 into the contest as Boris Katchouk fought his way past two Finnish defenders before chasing down a loose puck and jamming it in past Finland goaltender Ukko-Pekka Luukkonen for the game’s first goal, which was eventually confirmed after it went to video review.

The goals kept coming for Canada 27 seconds later. Put on the power play for the first time in the tournament, Canada solved Luukkonen just 13 seconds into the man-advantage when Jordan Kyrou fed the puck down low to Taylor Raddysh at the side of the net. With Raddysh and Finland defenders whacking away at the puck, it bounced free to the other side, where Regina Pats captain Sam Steel (Anaheim Ducks) was waiting to pounce, doubling Canada’s lead.

The first all-WHL goal at the tournament would come from Canada’s opponents later in the period. WHL leading scorer Aleksi Heponiemi (Florida Panthers) from the Swift Current Broncos was in the right place at the right time when a rebound popped out to him in front of the net and was quickly deposited past Hart. Finland captain Juuso Valimaki (Calgary Flames) of the Tri-City Americans picked up the lone assist on the goal.

Canada would regain their two-goal lead 33 seconds later though. Montreal Canadiens defenceman Victor Mete brought the puck into the offensive zone, but as a Finnish defender poked the puck away, it went right to the stick of Jonah Gadjovich, who fed it across the ice to Drake Batherson for the team’s third goal of the period.

Though Canada had denied them on their first three power play opportunities, Finland finally broke through in the second period for their first goal on the man-advantage. Portland Winterhawks defenceman Henri Jokiharju (Chicago Blackhawks) fired a shot through traffic that appeared to deflect off a Canadian defender on the way to the net, beating Hart to bring Finland back within a goal.

Canada would restore their two-goal lead five minutes later in the period. With Robert Thomas streaking down the wing, he centered the puck for a pair of Canadians rushing up the ice, with the ensuing clash of bodies giving Taylor Raddysh time and space to fire off a puck that befuddled Luukkonen for the insurance goal in the game.

GAME OVER! 🇨🇦 rides a 3⃣-goal 1st period to a 4-2 win over 🇫🇮 in its opener in Buffalo. Statistics: https://t.co/gxtgjx9HU3 #WorldJuniors pic.twitter.com/O1w5npajmM

When Canada needed a timely save though, Hart was there to provide it. The 6-foot-2, 185-pound product of Sherwood Park, Alta., made 11 saves in the first period, 10 in the second and confirmed the victory by stopping all eight Finland shots in the final period.

The save of the game belonged to another WHL star though. In the dying minutes of the game with Finland pressing, the puck squeaked past Hart and towards the goal line, but Kelowna Rockets defenceman Cal Foote dove back and knocked the puck out of harms way just in time, with his game-saving play confirmed through video review moments later.

Canada would ultimately finish 1-for-3 on the power play. While they spent more time in the penalty box, Canada limited their opponents to just one power play goal on six opportunities.

Up next for Canada is a date against Slovakia Wednesday, December 27 (5 p.m. MST) at the Key Bank Centre in Buffalo, N.Y.

In other action on opening day of the annual international tournament for world junior hockey supremacy, Group B action saw the Czech Republic top Russia 5-4 and Sweden beat Belarus 6-1. At the time of publishing the United States and Denmark were competing in the fourth and final game of the day. Stats will updated for the game as they become available.