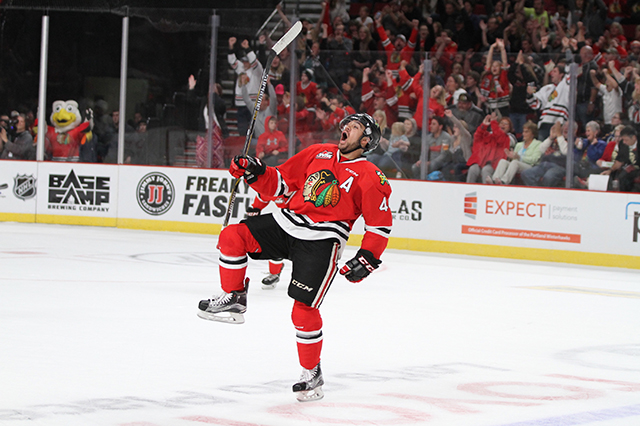 Another busy night in the Western Hockey League featured 10 games on both sides of the border as WHL Opening Week continued Saturday.

A pair of jaw-dropping six-point performances came courtesy Chad Butcher and Vladislav Lukin, while Zach Fischer scored three times and Michael Rasmussen did one better with a four-goal night.

For the second night out, we had a game that featured a whopping nine goals on one side of the scoreboard as the Medicine Hat Tigers whipped the Lethbridge Hurricanes. South of the border, the Tri-City Americans stomped the Spokane Chiefs, scoring eight times along the way, while the Portland Winterhawks soared over the Seattle Thunderbirds by a 7-3 final tally.

Out east in Brandon, a damper was put on the Wheat Kings’ 50th anniversary celebrations after fog rolled into Westman Place, calling for the suspension of Saturday’s contest with the Moose Jaw Warriors.

The Wheat Kings raised three championship banners to the rafters and honoured a set of esteemed alumni Saturday night, but after that the fog rolled in – yes, you read that correctly – bringing a halt to the contest.

Play was stopped with 5:37 remaining in the second period as humidity caused low-lying fog to create an unsafe playing conditions inside Westman Place.

Brayden Watts (1) opened the scoring in the first period, giving Moose Jaw a 1-0 lead. In the early  stages of the second period, Stelio Mattheos (2) tied the game 1-1 before Nikita Popugaev (1) scored before play was suspended to give the Warriors a 2-1 edge.

The remainder of the game will be played at a date to be determined, in consultation with the Warriors and Wheat Kings.

Brody Willms made 22 saves in net for Moose Jaw, while Jordan Papirny was good on 22 as well.

Rookie Troy Fix-Wolanksy registered a goal and an assist, while veteran Lane Bauer tallied the winning goal in the shootout as the Oil Kings edged the Rebels by a 4-3 score in the first hockey game to be played at the brand-new Rogers Place in Edmonton.

Fix-Wolansky (1) tallied 22 seconds into the second period, notching a power-play marker as the first ever goal to be scored in Rogers Place.

Trey Fix-Wolansky of the @EdmOilKings with the historic first WHL goal at the new @RogersPlace in #yeg #WHLOpeningWeek pic.twitter.com/ORcKHcIhFF

Evan Polei (2) and D-Jay Jerome (1) responded as Red Deer took a 2-1 lead, before Bauer (1) knotted the game with another power-play effort for the Oil Kings. Jerome (2) registered his second of the night as the Rebels retook the lead before veteran Tyler Robertson (2) evened the score yet again.

Overtime solved nothing and it was eventually Bauer giving the hosts the win on opening night in their new barn.

The Oil Kings were a perfect 3-for-3 with the man advantage, while the Rebels were 0-for-2.

Goaltender Patrick Dea made 24 saves for the win, while Trevor Martin faced 44 shots, steering aside 41.

Graham Millar scored his third goal of the season, while goaltender Lasse Petersen turned aside 12 of the 13 shots he faced and the Silvertips claimed a 3-1 triumph over the Giants on Saturday.

The Everett power play finished 1-for-5, while Vancouver was 0-for-4.

Ryan Kubic made 28 saves in a losing cause.

The Rockets weren’t about to get rocked in their own barn. One night after being knocked around in a 9-2 loss to the Blazers in Kamloops, the Rockets refueled and dispatched their Okanagan rivals by a 5-1 margin Saturday night in Kelowna.

Defenceman Cal Foote was a catalyst, chipping in with three helpers for the Rockets, while Riley Stadel registered two goals and Michael Herringer turned aside 25 pucks.

Jordan Borstmayer (1) and Jonathan Smart (1) struck in the first period to give the Rockets a 2-0 lead after 20 minutes.

Then Stadel (1, 2) scored back-to-back markers in the second period before Tanner Wishnowski (1) piled on to give the hosts a commanding 5-0 advantage after 40 minutes.

The victory goes into the books as the first career win for Rockets head coach Jason Smith.

Dylan Ferguson started the game between the pipes before being pulled after allowing two goals on 14 shots. Carter Phair came on in relief and surrendered three goals on 19 shots.

For the second consecutive night, the Hitmen and ICE required extra time to get to a decision, but in this go around, it was veteran defenceman Micheal Zipp scoring in overtime to give Calgary a 2-1 triumph.

Andrew Fyten (1) opened the scoring in the first period, before ICE defenceman Cale Fleury (1) drew things even in the second period. Zipp ((1) scored with only 42 seconds remaining in overtime to avoid a second straight trip to the skills competition.

Payton Lee was outstanding, making 36 saves in his hometown debut for the ICE, while Kyle Dumba made 33 saves on 36 shots for the win.

The Tigers became the second team in as many nights to explode for nine goals as they TRIPLED the Hurricanes by a 9-3 margin. It was the Blazers blasting the Rockets by a 9-2 score Friday.

Mark Rassell (1) made it 2-0 on the power play, before Kord Pankewicz (1) responded with his own power-play tally to make it a 2-1 game. Then it all unraveled for Lethbridge.

Fischer (2) made it 3-1 before James Hamblin (1) scored a short-handed goal to extend the lead to 4-1. Fischer (3) grabbed his third of the night before Matt Bradley (2) clicked to make it 6-1 Medicine Hat after 40 minutes.

Butcher (1) continued the onslaught only 29 seconds into the final period before Zane Franklin (1) gave Lethbridge its second goal of the evening. Rassell (2) responded with his second of the evening and then Max Gerlach (1) got in on the action, just in case the outcome was in doubt. That gave the Tigers a 9-2 lead.

Josh Tarzwell (1) scored one final marker for the Hurricanes.

With the score getting out of hand, tempers flared and the two teams walked away with a combined 192 penalty minutes after the final buzzer had sounded.

The Tigers rounded out the night 4-for-8 on the power play, while the ‘Canes went 2-for-10.

Rookie Duncan McGovern made 15 saves for his first WHL victory, while veteran Jake Morrissey came on in relief as things got out of hand, making two saves on three shots.

At the other end, Stuart Skinner saw the hook after allowing six goals on 34 shots, while Ryan Gilchrist surrendered three goals on 14 shots in relief.

The high-scoring trend continue south of the border as the Winterhawks hammered the Thunderbirds. Ryan Hughes filed a three-point night, including a goal, while Evan Weinger collected three assists to propel Portland to a 7-3 win.

The two U.S. Division rivals went back and forth until Cody Glass (1) gave the Winterhawks a 4-3 lead with 7:41 to go in regulation. Fromm there, Brendan De Jong (1), Skyler McKenzie (1) and Brad Ginnell (1) piled on.

Keoni Texeira (1), Alex Overhardt (1) and Hughes (1) scored in the first 40 minutes for Portland, while the Thunderbirds got goals from Donovan Neuls (1, 2) and Luke Ormsby.

Michael Bullion made 27 saves for the win, while 20-year-old Rylan Toth allowed six goals on 34 shots, taking the loss.

The Winterhawks went 2-for-4 with the power play, claiming victory in Mike Johnston’s return behind the bench. The Thunderbirds were 0-for-1 with the man advantage.

Jake Leschyshyn had two goals and an assist, while Lane Zablocki added a goal an assist to help the Pats double up the Raiders by a 4-2 margin.

Leschyshyn (1) opened the scoring with a short-handed effort before Austin Glover (2) and Kolten Olynek (2) scored on either side of the first intermission to give the Raiders a 2-1 edge.

Zablocki (1) knotted the game on a power play before Braydon Buziak (2) gave the Pats the lead with only 2:59 to play. Leschyshyn (2) notched his second of the night into an empty net.

Jordan Hollett made 28 saves to claim the triumph for Regina, while Ian Scott was steady, making 41 saves in defeat for Prince Albert.

The Raiders power play finished 1-for-7, while the Pats went 1-for-3.

Vladislav Lukin caught wind of Chad Butcher’s six-point effort and thought to himself, “Yeah, I can do that.” Meanwhile, Michael Rasmussen decided to one-up Zach Fischer’s hat trick by finding the back of the net four times and the Americans cruised to an 8-3 win over the Chiefs.

Tri-City jumped out to a 3-0 lead in the first period, courtesy three straight strikes from Rasmussen, two of which were on the power play.

Kailer Yamamoto (1) got Spokane on the board with a power-play goal of his own early in the second period. Lukin (1) restored the three-goal advantage before Keanu Yamamoto (1) cut back in. Lukin (2) responded once again.

Then Jaret Anderson-Dolan (1) secured a power-play marker to once again pull the Chiefs within two goals. In the final minute of the second period, Rasmussen (4) put home his final goal of the night to give Tri-City a 6-3 lead.

Morgan Geekie (1) made it 7-3 before Lukin (3) collected his own hat-trick tally late in the proceedings.

Beck Warm made 24 saves to backstop Tri-City, while Jayden Sittler surrendered four goals on 25 shots, before Matt Berlin came in and gave up three goals in relief.

The Americans were 2-for-5 on the power play, while the Chiefs couldn’t find a win after going 3-for-5 with the man advantage.

For the second consecutive night, the Cougars scratched out a win over the defending B.C. Division champion Royals. On this night, it was a pair of four-point performances from Brad Morrison and Jared Bethune assisting in the outcome.

The Cougars pounced on a 3-0 lead through 20 minutes as Justin Almeida (1), Kody McDonald (1) and Ryan Schoettler (1) all found the back of the net.

Ethan Price (1) registered the Royals lone goal in the second period before Colby McAuley (3) and McDonald (2) rounded out the scoring for the Cougars in the third period.

Two in a row! @pgcougars knock off Victoria Royals twice in as many nights! ?: @onelionphoto

Both teams went 0-for-5 with the man advantage.

In the crease, Nick McBride made 36 saves for the Cougars, while Griffen Outhouse was yanked after allowing three goals on six shots in the opening 9:09 of regulation. Dylan Myskiw came on in relief, turning aside 20 of the 22 shots he faced.

Sunday in the WHL