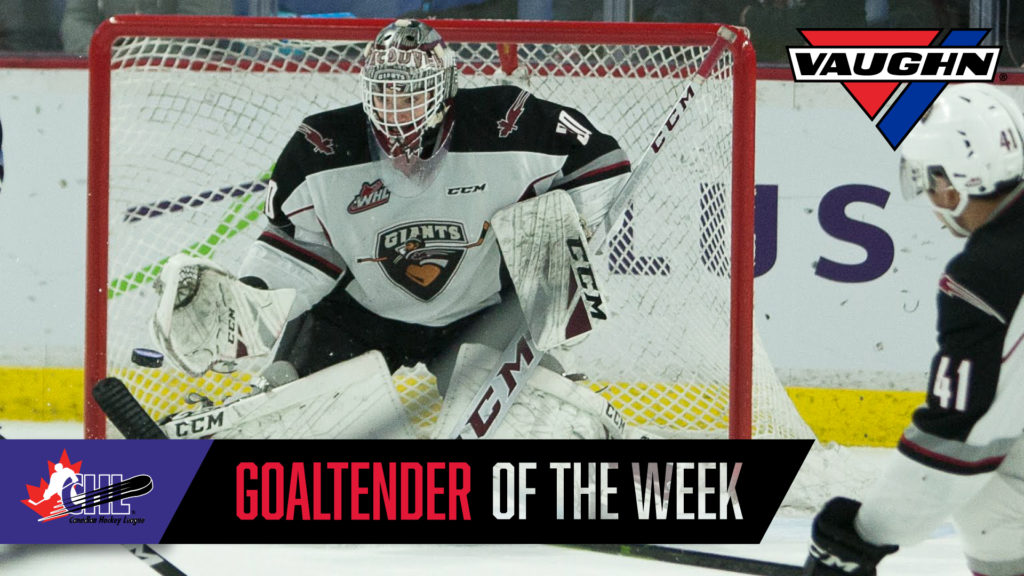 Toronto, Ont. – The Canadian Hockey League today announced that David Tendeck of the Vancouver Giants is the Vaughn CHL Goaltender of the Week for the fifth week of playoff action ending April 21 with a 2-0 record, a goals-against average of 1.50, and save percentage of .947.

Tendeck claims the honour for the first time this year after stopping 54 shots over the first two games of the WHL Western Conference Championship versus the Spokane Chiefs. The Arizona Coyotes prospect began the week Friday with a 30-save outing en route to a 4-1 victory and first-star recognition. He then followed up that performance the next night when he recorded his second-straight victory after turning aside 24 shots to come away with a 4-2 win for his hometown team.

Also considered for the award this week was Samuel Harvey of the Rouyn-Noranda Huskies, who came away with a perfect 2-0 showing versus the Rimouski Oceanic that counted a combined 59 saves for a save percentage of .937 and goals-against average of 2.00. In the OHL, Ottawa 67’s netminder and Vancouver Canucks prospect Michael DiPietro won all three of his appearances versus the Oshawa Generals as he came up with a 2.67 goals-against average and .896 save percentage.

Having won eight-straight games in the 2019 WHL Playoffs and leading 2-0, Tendeck and the Giants will look for a win on the road against the Chiefs Tuesday, April 23 (7:05 p.m. PT) at Spokane Veterans Memorial Arena.