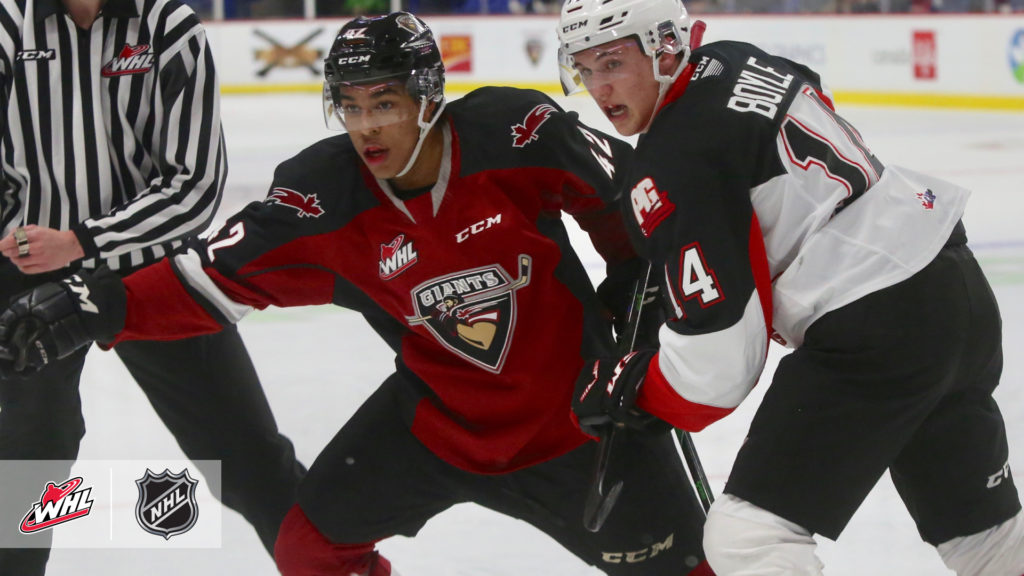 When Vancouver Giants forward Justin Sourdif wants something, not many people are going to stand in his way.

Whether it’s a loose puck, a high-danger scoring chance, or a higher spot in the rankings for the 2020 NHL Draft, Sourdif has been relentless in pursuing what he wants.

For any hockey player, it’s an important trait to have. However, for the 17-year-old who stands at 5-foot-11 and weighs 163 pounds, it’s a special trait that has made him that much better.

“Everybody is a competitor that’s here,” Sourdif said while in the midst of the media rounds at the 2020 Kubota CHL/NHL Top Prospects Game. “They wouldn’t have been here if they weren’t.

“When I’m feeling good, I’m a dog on a bone. Even if the guys probably got like 30 pounds on me and a couple inches, I’m still likely to win my puck battles against them.”

On most game nights, you can find Sourdif planted firmly in front of the net, battling against a bigger defender to even get a split second with the puck. In most cases, that’s all the time Sourdif needs to bury the puck or create a scoring opportunity for a teammate. When he’s not patrolling the area in front of the net, he also possesses superb aim that brought him offensive success at the Delta Hockey Academy and with the Valley West Hawks before joining the Giants.

“You want to be versatile,” Sourdif continued. “If you can have as many tools in the toolbox as possible, it just improves your draft stock. For NHL teams, they like guys that can do everything and do it well.”

Behind last year’s standout rookies Brayden Tracey and Adam Beckman, who both played as 17-year-olds, the 16-year-old Sourdif ranked third in goals by a rookie with 23. On an older team that made it all the way to Game 7 of the 2019 Rogers WHL Championship Series, Sourdif has already elicited an impressive review from Giants’ head coach Michael Dyck.

“At times I forgot he was 16,” Dyck said of Sourdif’s growth. “The way he played for us last year and even at 17 this year, we’ve got enough confidence in him where we can get him out in those situations and I think just by playing in those situations he’s become a better player.

“He’s certainly more consistent in the second half here as opposed to the first half here.”

Up until late January, Sourdif’s 2019-20 campaign was by no means a terrible one, producing 31 points (14G-17A) through 40 games. Perhaps though, Sourdif and others expected the third-overall selection from the 2017 WHL Bantam Draft to produce at a better rate while the Giants were looking for more of a spark from their younger talent after the team’s notable off-season departures.

“Last year he was a pretty integral part of our team, but he was well-insulated playing with some older guys on an older team,” Dyck said. “This year with a younger team, he’s had to do some heavy lifting himself.”

As it turns out, as Sourdif regained his offensive prowess so too did the Giants regain their form. Throughout an 11-game winning streak, Sourdif appeared in 10 of those contests, posting 19 points (10G-9A) to establish new career-high totals in the three major offensive categories.

“If everybody on the team is clicking, everybody gets success,” Sourdif said. “If guys try to go on their own page, then things don’t work out. That’s why we’re really big on team bonding and whatnot to keep our team close together.

“Everybody comes to play every night and play for each other. That just helps our whole team environment.”

The 10-game glance is just one fifth of Sourdif’s second season in the WHL, but still an impressive part in showing what he can do when everything is rolling as it should.

That’s where Sourdif wants to have his success shown, in helping the team win. While Sourdif and other top offensive performers place want to thrive offensively in the big moments, the Surrey, B.C. product said he cares just as much about that as he does laying down to block a shot in the dying seconds of an important game.

While he was in Hamilton, Ont. for this year’s Top Prospects game, Sourdif couldn’t help but appreciate the talent he was surrounded by, helping set him in the right mindset for the coming months ahead. Even with his draft ranking, it’s a good reward for the work done up until that point, but no a be all and end all for Sourdif’s drive to be the best.

“I keep it in the back of my head that you have no idea where you’re going until draft day. I tried to not focus on that too much. Obviously it means a little bit, but you never know.

“There’s still a good chunk of the season left.”