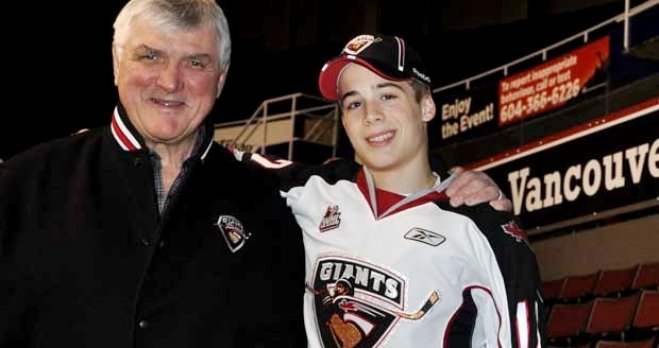 VANCOUVER, BC – The Vancouver Giants are proud to announce the signing of both Ty Ronning and Jesse Roach to WHL Player Agreements.

A native of Burnaby, BC, Ronning was the Giants first selection in the 2012 Bantam Draft (1st Round, 15th overall). He played last season with the Burnaby Winter Club Bantams that captured the BC and Western Canadian Championships. The 5’6”, 140 lbs right winger is the son of former Vancouver Canuck, Cliff Ronning.

Hailing from Quesnel, BC, Roach was the Giants third selection in the 2012 Bantam Draft (2nd Round, 42nd overall). The right winger is 6’3”, 160 lbs, and played last season playing Bantam AA in Quesnel.

“This is a very exciting day for the future of our hockey club”, said Giants Executive Vice President & General Manager, Scott Bonner. “We’re thrilled to have both players commit to our program, and look forward to working with them and their families to continue their development.”

Both players will attend Giants Training Camp this August, however all players in their age group (1997-born) are only eligible to play in a maximum of five games during the 2012/13 WHL regular season, until such time as their club team is eliminated from the playoffs.