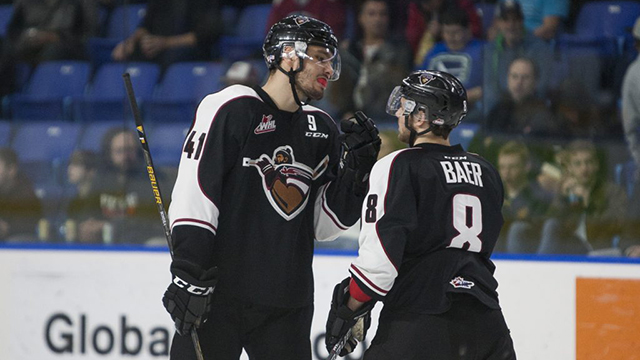 Days after acquiring Russian tower Nikita Popugaev in an unexpected deal with the Moose Jaw Warriors, the Prince George Cougars have doubled dipped in eastern Europe, landing Slovakian sniper Radovan Bondra from the Vancouver Giants on the morning of the WHL Trade Deadline.

In exchange, the Cougars shipped Dutch import Bartek Bison (1998), prospect Tyler Ho (2000) and a third round pick in the 2018 WHL Bantam Draft to the Giants.

The two teams announced the deal at 10 a.m. (Mountain).

“Radovan Bondra is a dominant winger in our league and bring a unique combination of size, skill and finish to our lineup,” said Todd Harkins, general manager of the Cougars, in a team release. “He’s an NHL-drafted player with a very impressive international resume and provides our team with another bonafide offensive weapon.

“He’s the final piece to what we feel is a very deep and talented lineup, and we are very excited to welcome him to the Prince George Cougars.”

Bondra, a product of Trebisov, Slovakia, and fifth round pick (151st) of the Chicago Blackhawks at the 2015 NHL Draft, is enjoying a career season, having managed 31 points (19G-12A) in 32 games. Originally a first round pick (eighth) of the Giants at the 2015 CHL Import Draft, the 6-foot-5, 216-pound winger has collected 61 points (34G-27A) in 90 career WHL games. He also represented Slovakia at the 2017 IIHF World Junior Championship in Toronto and Montreal.

The addition of Bondra ensures the Cougars have no intent to settle for anything less than a B.C. Division title and length post-season run.

The Cougars’ interior rivals down in Kamloops and Kelowna made noteworthy additions in the lead up to the WHL Trade Deadline.

First, it was the Blazers landing 20-year-old Alaskan Lane Bauer from the Edmonton Oil Kings, beefing up their forward group while adding some offensive punch and snarl in the process. Then it was the Kelowna Rockets bringing 20-year-old Reid Gardiner back from the American Hockey League via the Prince Albert Raiders, before mixing in pesky forward Carsen Twarynski in a deal with the Calgary Hitmen.

Looking further south in the Western Conference, the Everett Silvertips got some shopping done early, starting the roll by acquiring 20-year-old defenceman Aaron Irving from the Edmonton Oil Kings.

Essentially, a number of the big boys in the west added.

Go out and get two of the most prized Euros in the league.

As it stands, the Cougars hold a five-point lead on the Blazers for first place in the B.C. Division, but also carry two games in hand.

“We thank Radovan for two great years of service,” said Glen Hanlon, general manager of the Giants, in a team release. “It’s been fun to watch him grow, and we wish him all the best in Prince George. We gave up a valuable player, so we’ve received a very good local prospect in Tyler Ho in return.

“He’s one of the top scorers in the BC Major Midget League, and we’re looking forward to giving him the opportunity to play in front of friends and family. The deal will also give Bartek Bison an opportunity to come in and showcase his skillset, help develop our team and compete to be a part of our future.”

Ho adds another young piece to a Giants squad that appears to retooling as it looks in on the Western Conference Wild Card race from eight points out.

The 5-foot-11, 185-pound product of North Vancouver was originally a third round pick (66th) of the Cougars at the 2015 WHL Bantam Draft. In 26 contests with the Valley West Hawks (BCMML), the youngster has 35 points (14G-21A) while also sneaking into three outings with the Coquitlam Express of the BCHL.

“It was very difficult to part with both Bartek and Tyler, but it was necessary to do so in order to acquire a player like Bondra,” Harkins said. “Bartek will bring a ton of passion and grit to the Giants and Tyler will play a huge part in their future success. I wish both of them the very best.”

Bondra is expected to join the Cougars Tuesday night in Red Deer. The Giants return to action Friday when they host the Moose Jaw Warriors.