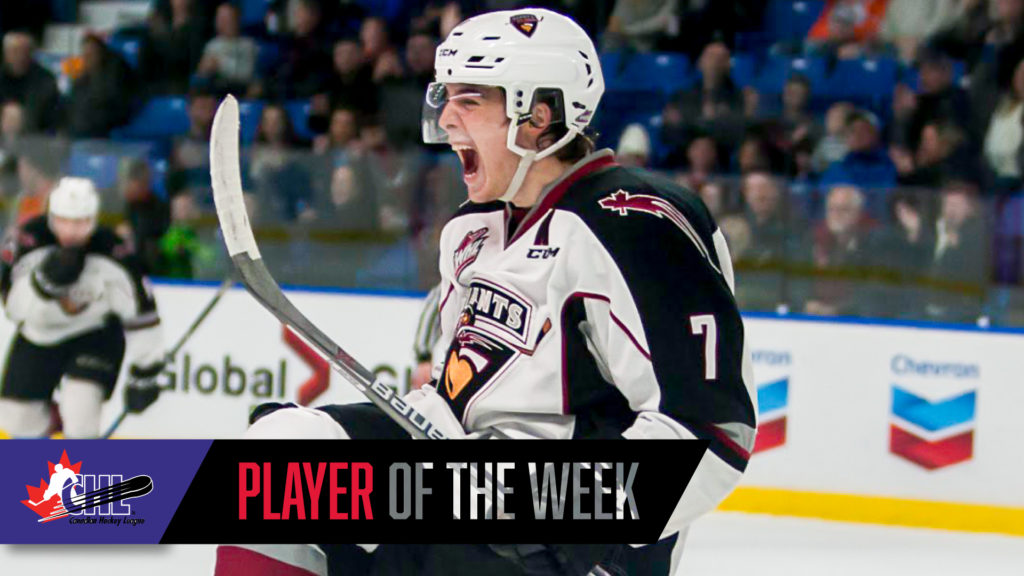 Toronto, ON – The Canadian Hockey League today announced that New York Rangers prospect Ty Ronning of the Vancouver Giants is the CHL Player of the Week for the week ending February 4, 2018 scoring five goals and two assists for seven points in three games with a plus-minus rating of plus-3.

Ronning, who was selected in the seventh-round, 201st overall, by the Rangers in the 2016 NHL Draft, delivered a trio of multi-point performances last week. His performance helped the Giants win all three games to improve their record to 28-16-5-3 in the Western Hockey League’s B.C. Division standings.

Opening the week with two home games against the Calgary Hitmen, Ronning scored twice with an assist in Wednesday’s 4-1 victory then scored another two goals including the game-winner on Friday, earning first star honours in the 4-2 win. On Saturday he produced another first-star effort, scoring once and assisting on the game-winner to reach the 200-point milestone for his career in a 5-4 triumph over the Medicine Hat Tigers. The Giants sit just four points back of the Kelowna Rockets and Victoria Royals who are tied for the division lead.

A 20-year-old, 5-foot-9, 172-pound forward from Burnaby, BC, Ronning is playing in his fifth season with the Giants, who chose him in the first round, 15th overall, of the 2012 WHL Bantam Draft. He currently ranks second in the WHL with 47 goals through 52 games, a new career-high for the forward. Ronning is now just one goal shy of Evander Kane’s single season record of 48 goals and ranks third on the club’s all-time list with 113 in 267 games played.
The Giants will have a chance to pull themselves closer to the top of the division on Wednesday, February 7 (7:05 p.m. PST) as they travel to the Okanagan to take on the Kelowna Rockets.