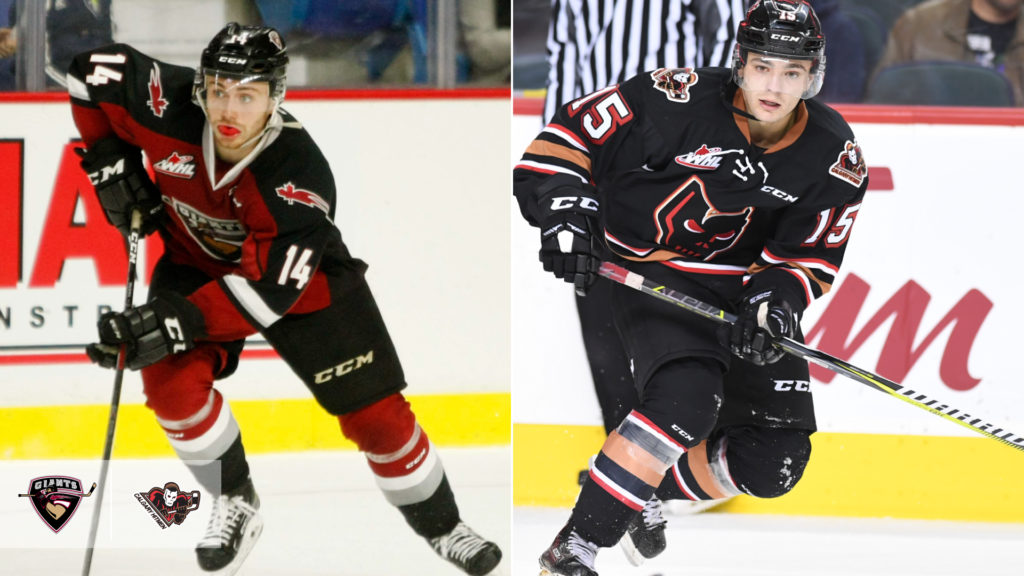 Also heading the Hitmen in the deal is a conditional draft choice in the 2020 Western Hockey League Bantam Draft.

Heading to Calgary in the deal is Malm, the Giants’ leading scorer this season. In 13 games this season, Malm has 15 points (9G-6A), including three power-play goals and one game-winning goal. Malm had also tallied four multi-point games this season with the Giants.

“James is a proven scorer in our league who can play centre or the wing and will fit nicely into our top six forwards,” said Hitmen General Manager Jeff Chynoweth.  “We would like to thank Tristen for his time in Calgary both on and off the ice and wish him success moving forward with the Giants.”

The 5-foot-9, 155-pound product of Langley, B.C. is a product of the Valley West Hawks in the British Columbia Major Midget Hockey League where he recorded 109 points (34G-75A) in 49 games.

Heading the other way in the deal is a promising young talent in Nielsen, a 5-foot-9, 192-pound product of Fort St. John, B.C.

Selected 20th overall by the Hitmen at the 2015 WHL Bantam Draft, the 18-year-old Nielsen has appeared in five games with the Hitmen this season, being held pointless.

Internationally Nielsen represented Canada at the 2016 World Under-17 Hockey Challenge. He posted four goals in six games for Canada White. In 2015, he captured a silver medal with Canada U16 at the Youth Olympic Games. Giants head coach Michael Dyck was an assistant coach on that staff.

“We’re looking forward to welcoming Tristen to the Vancouver Giants organization,” said Giants General Manager Barclay Parneta. “He brings a versatile skill-set and strong character into our dressing room and we know he’ll fit in well with our group.”

The Hitmen noted in their press release that they expected Malm to be with the team to open a three-game weekend when the Medicine Hat Tigers come to town on Friday, November 2 (7:00 p.m. MT).

The Giants are next in action on Saturday, November 3 (7:00 p.m. PT), playing host to the Kamloops Blazers.

TRADE: The Vancouver Giants have acquired 2000-born forward Tristen Nielsen (@tristen_080) in a trade with the Calgary Hitmen in exchange for 1999-born forward James Malm and a conditional draft pick in 2020.

BREAKING: Hitmen acquire James Malm and a conditional pick in the 2020 WHL Bantam Draft from the Vancouver Giants in exchange for Tristen Nielsen.

Welcome to the Hitmen James!! 🙌 pic.twitter.com/eBRDNObQ8z