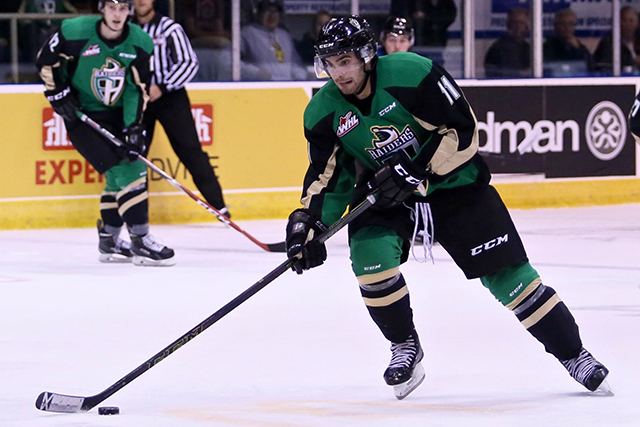 The Vancouver Giants have acquired right winger Cal Babych (1997) from the Prince Albert Raiders in exchange for a conditional pick in the 2018 WHL Bantam Draft.

The Raiders had re-assigned the 5-foot-10, 179-pound Babych on Wednesday, so Friday’s trade comes as little surprise after the three-year Western Hockey League veteran was unable to make the grade in Prince Albert.

“We’re excited to add Cal to our group,” said Glen Hanlon, general manager of the Giants, in a team release. “The Babych family has an obvious connection to hockey in Vancouver, so Cal will be a welcome addition to the Giants.”

The Giants will represent the fourth team for Babych in as many seasons.

Babych remained in Prince George for one season, scoring seven goals and 12 points in 51 games before being dealt to the Raiders in September 2015. In Prince Albert, he managed 14 points – a career high – in 56 games.

In 149 career WHL regular season contests, Babych has found the back of the net 15 times, adding 20 assists for 35 points. He has also skated in nine WHL post-season outings.

The native of North Vancouver is the son of former NHL defenceman Dave Babych.

The Giants are back on the ice Saturday afternoon (2 p.m. PDT) when they host the Victoria Royals at the Ladner Leisure Centre.

The Raiders also return to the rink Saturday (7:05 p.m. MDT) when they take on the Saskatoon Blades in Warman, Sask.