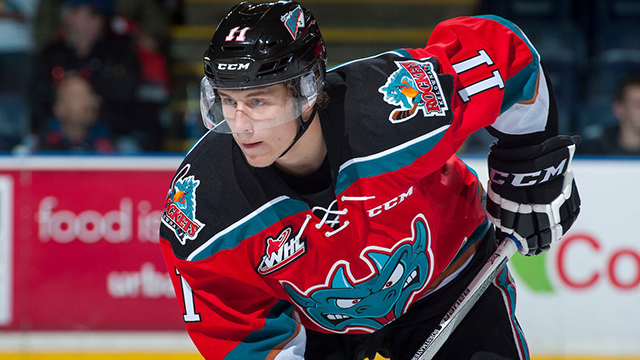 The Vancouver Giants have added some forward depth with the acquisition of 18-year-old forward Jordan Borstmayer from the Kelowna Rockets.

In exchange, the Giants shipped a fifth round pick in the 2017 WHL Bantam Draft to Kelowna. The two teams announced the deal Friday afternoon.

“We’re excited to add Jordan to our group,” said Glen Hanlon, general manager of the Giants, in a team release. “He has playoff experience, which we are trying to add to our team. Jordan is also a smart player who plays with a lot of energy, and we’re looking forward to the continued growth of our team with him as a part of it.”

Borstmayer, a product of St. Brieux, Sask., has skated in 96 career WHL regular season contests, talling 12 points (6G-6A) along the way, including seven points (3G-4A) in 32 outings this season. The 5-foot-11, 174-pound right winger also dressed for 17 post-season contests last season as the Rockets advanced to the Western Conference championship.

“It was just a situation where we felt it would be beneficial for both sides if Borstmayer had a change of scenery,” said Bruce Hamilton, general manager of the Rockets, in a team release. “He deserves more ice time and by circumstance he wasn’t able to get it here. We wish Jordan all the best in Vancouver.”

Borstmayer was originally a third round pick (65th) of the Rockets at the 2013 WHL Bantam Draft.

The Giants return to action Friday as they visit the Red Deer Rebels, while the Rockets travel to Kamloops for a date with the Blazers.