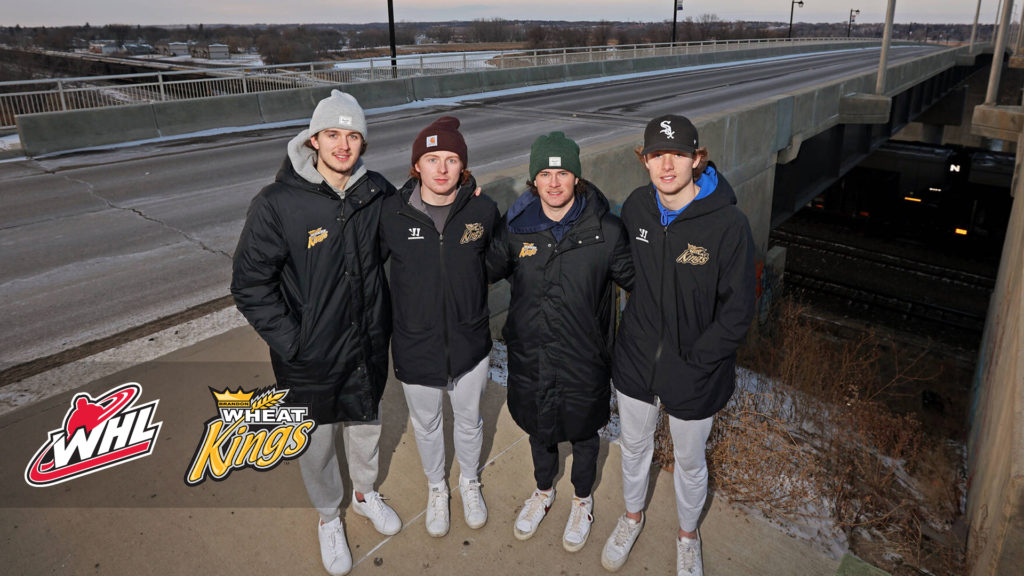 Note: This story contains content that may be upsetting to some readers.

Four members of the Brandon Wheat Kings are being celebrated after they successfully came to the aid of a distressed man who they found considering suicide on the First Street bridge in Brandon on Tuesday. The story was first reported by Perry Bergson of the Brandon Sun on Friday, December 2.

Jake Chiasson, Calder Anderson, Nolan Ritchie, and Ben Thornton (pictured above, left to right) are being lauded for their efforts after they spotted a man sitting on the edge of the bridge and stopped their car to check on him. The four players were on their way home after volunteering at the Samaritan House.

“I got out of the car and asked him if he was okay,” Anderson told the Sun. “He informed me that things weren’t great for him and he was having some pretty bad thoughts, so I asked him if we could get some help and he agreed.

“I think the biggest thing in that situation is just to ask the person if they need help, and as soon as I asked, you could see the relief on his face knowing he had someone to care for him.”

As Anderson talked with the man, Chiasson dialed 911 to get help from emergency services.

Quickly, another individual stopped on the bridge and joined the four Wheat Kings in assisting the man, with emergency services arriving on scene shortly after.

Four @bdnwheatkings @TheWHL players — Jake Chiasson, Calder Anderson, Nolan Ritchie and Ben Thornton — helped save a suicidal man’s life Tuesday evening when they stopped to see if he was OK.
As cars sped by, they stepped up.
I have the full story in Friday’s @thebrandonsun pic.twitter.com/tXvLA5sE4g

“Life is kind of at a standstill for those couple of minutes,” Chiasson told the Sun. “You have the adrenalin pumping a little bit and it’s a situation you’re never taught to be in. It’s just whatever comes out from within is how you handle it.”

Brandon Police Service Staff Sgt. Bill Brown told the Sun that the man in distress received treatment and is fine.

“It’s four young guys who were at Samaritan House already, and continued to provide a community service with no one really watching,” Staff Sgt. Brown told the Sun. “They did something above and beyond.”

In the account provided to the Brandon Sun, the players recalled 30 or 40 vehicles driving by the scene without stopping.

“I think it’s just something that all of our parents and this organization have taught,” Chiasson told the Sun. “It’s about picking each other up and just caring for everyone.

“You don’t know what situation people are going through. Sometimes all it takes is just getting out to give them a little help or conversation.”

Wheat Kings Head Coach and General Manager Marty Murray is in his first season at the helm after spending four seasons as a fan favourite in Brandon, including two as captain (1991-1995). He praised his four players, who showed the type of leadership that extends far beyond an ‘A’ or a ‘C’ on the front of a sweater.

“It doesn’t get any bigger than that,” Murray told the Sun. “What happens if they drove by or they didn’t get out of the car to talk to that gentleman? That makes the hair on the back of your neck stand up for sure.

“I told them after practice [on Wednesday] that’s a lot bigger than hockey and what they did was heroic. It was real mature of those guys to do what they did.”

Since 2016, the WHL and its Clubs have partnered with CMHA branches across Western Canada to provide mental health education and support to all players, coaches, parents, billets, and team staff across the League. This program has become a valuable platform for CMHA branches, teams, and individual players to encourage open discussion about mental health within the hockey community and broader public.

“I don’t know what I would have done if I saw him jump off the bridge,” Thornton told the Sun. “We’re very happy that we were able to save him and get him some help.”

Anderson, 20, hails from Brandon and is in his first season with his hometown Wheat Kings after spending the previous three campaigns with the Moose Jaw Warriors. Originally a seventh-round pick (134th overall) of the Warriors in the 2017 WHL Draft, the 5-foot-10, 171-pound forward is enjoying a career year on the ice, having registered 14 points (5G-9A) in 22 games this season. Anderson serves as a part of the Wheat Kings leadership group.

Ritchie, 20, is a product of Brandon, having spent four seasons with his hometown Wheat Kings. Originally a third-round pick (56th overall) of the Wheat Kings in the 2017 WHL Draft, the 5-foot-10, 181-pound centre serves as co-captain for the Club. In 142 career games with the Wheat Kings, Ritchie has collected 137 points (58G-79A) in 142 appearances.

Chiasson, 19, is a prospect of the Edmonton Oilers (4-116, 2021). A native of Abbotsford, B.C., Chiasson is also a member of the Wheat Kings leadership group, having spent four full seasons with the Club after being selected in the first round (15th overall) of the 2018 WHL Draft. The right winger has tallied 72 points (27G-45A) in 128 career WHL games.

Thornton, 18, comes from Chilliwack, B.C. and is in his second season with the Wheat Kings. Originally a first-round pick (15th overall) of the Spokane Chiefs in the 2019 WHL Draft, the left winger has recorded 11 points (7G-4A) in 70 career WHL contests.