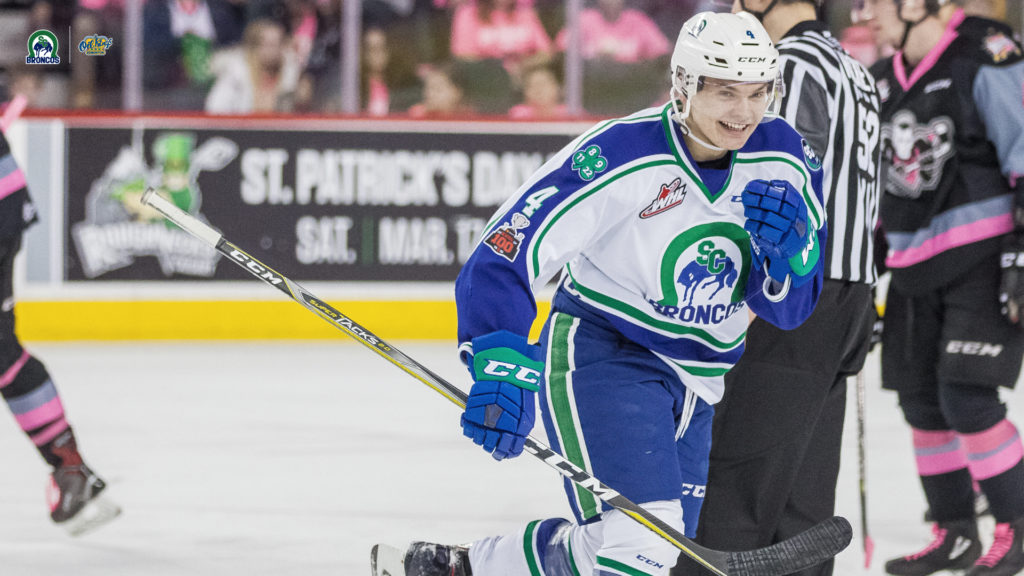 Alexander is a big get for the Oil Kings. Selected 17th overall by the Broncos in the 2016 WHL Bantam Draft, Alexander appeared in 32 regular season games with the Broncos in 2017-18, recording five points (1G-4A). Playing in all 26 games of the Broncos’ run to win the Ed Chynoweth Cup this past May, Alexander recorded one assist. The 5-foot-9, 171-pound left shot defenceman from Victoria, B.C. came to the Broncos after playing for the Shawnigan Lake School Prep team in Canadian Sport School Hockey League and Victoria Grizzlies.

Also headed to Edmonton is the 2001-born Smithson. A 5-foot-10, 152-pound defenceman from Winnipeg, Man., Smithson played the 2017-18 season with the Winnipeg Midget AAA Thrashers team, recording 13 points (6G-7A) in 41 games. Smithson was selected in the seventh round, 136th overall, by the Broncos at the 2016 WHL Bantam Draft.

Heading to Swift Current are a pair of Saskatchewan-born players in Culling and Lacombe.

Culling is a 5-foot-10, 165-pound product of Regina, Sask. Selected in the 10th round, 203rd overall, by the Oil Kings in the 2016 WHL Bantam Draft, Culling made his WHL debut last season, playing five games with the Oil Kings. The forward spent the majority of the 2017-18 season with the Regina Pat Midget AAA Canadians, recording 62 points (25G-37A) in 43 games. Culling would go on to add six points (3G-3A) in seven playoff games.

Also headed the Broncos way is Lacombe, a produce of nearby Moose Jaw, Sask. The 6-foot-0, 165-pound defenceman Played for the Moose Jaw Generals of the Saskatchewan Midget AAA Hockey League last season, recording two points (1G-1A) in 42 games. Lacombe was selected by the Oil Kings in the fifth round, 101st overall, in the 2017 WHL Bantam Draft.