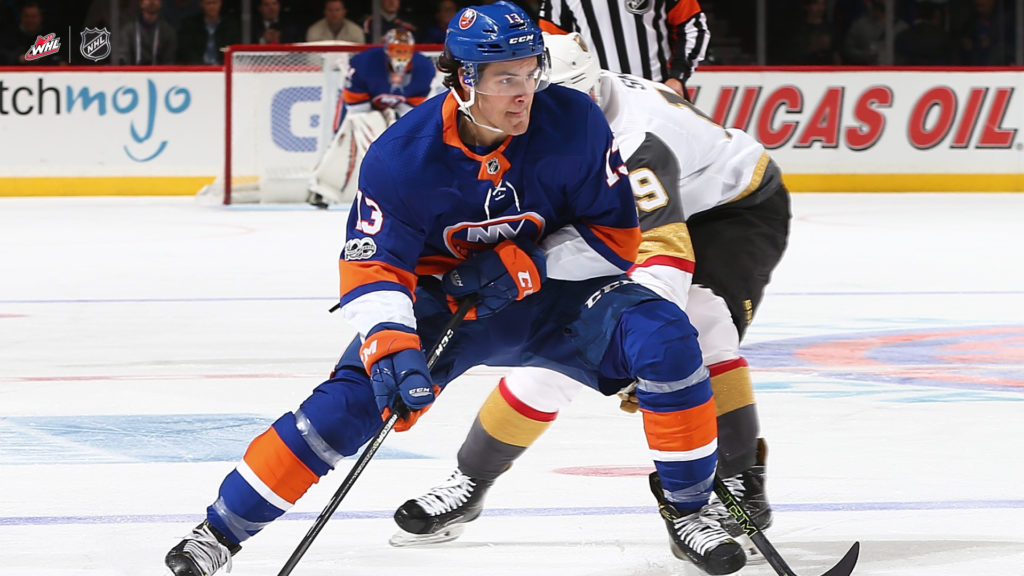 The lore of 2016-17 Ed Chynoweth Cup champion Seattle Thunderbirds is one that won’t soon be forgotten.

A quick 10 months removed from that historic day for the Thunderbirds, present day represents a different team at a different time as their first round WHL Playoffs series against the Everett Silvertips shifts to the accesso ShoWare Center for game three on Tuesday, March 27 (7:05 p.m. PT).

One key member of that championships roster, captain Mathew Barzal, had a solid performance in the last Western Hockey League Playoff game in Kent, Wash., tallying a pair of goals and three points. The Thunderbirds won that game, taking a three-to-two lead in the Rogers WHL Championship Series against the Regina Pats. Two days later in Regina, they’d capture the franchise’s first WHL Championship.

A champion then, Barzal has had a whirlwind rookie season in the National Hockey League with the New York Islanders since, one that has established him as the front-runner for the Calder Memorial Trophy as the league’s top rookie.

A nightly regular on the highlight reels, Barzal has quickly ingrained himself as a household name in hockey circles around North America and the globe. But what about Barzal’s own home and Western Canada as a whole?

After all, the product of Coquitlam, B.C. once excelled with the Burnaby Winter Club, earned the coveted title of the first overall selection in the 2012 WHL Bantam Draft by the Thunderbirds. He would go on to record 278 points (63G-215A) in 202 career WHL regular season games, exposing defences throughout Manitoba, Saskatchewan, Alberta, British Columbia, and the Pacific Northwest on a nightly basis.

So earlier this month, when the Islanders headed west for games in Vancouver, Edmonton, and Calgary, the attention surrounding the 20-year-old forward skyrocketed.

“I love playing in front of Canadian fans and that kind of stuff so I think all of that just contributes to it,” Barzal said of being north of the 49th parallel. “I just love coming up to Canada and playing.”

Thunderbirds fans didn’t have to wait long to see him succeed either as he scored seven games into the season against the Islanders’ heated-rivals from across town, the New York Rangers. His three separate five-point performances were all highly celebrated and a hat trick against the Winnipeg Jets on Dec. 23, 2017 continued to back up Barzal’s talents. Those four individual performances, part of 76-point (20G-56A) campaign in 76 games this season, has continued to fuel his worthiness as the player most proficient in his first full season in the NHL.

“I’m pretty satisfied at this point with what I’ve learned from players and soaking up everything, trying to learn every single day and get better,” added Barzal. “I’ve got such a great coaching staff and a knowledgeable teammates that they help me every day.

“Over the course of the year, I’ve become a better person and also a better player.”

It had been a bit of a surprise to see Barzal come back for the 2016-17 WHL regular season. Following an 88-point performance and a lengthy playoff run that ended with the Thunderbirds coming up just short of their championship aspirations, many assumed the 16th overall pick from the 2015 NHL Draft was more than ready to make the jump to the professional ranks.

Even though his eventual move back to Seattle was technically a demotion, Barzal didn’t see it that way, getting better and better throughout that season in the run up to the T-Birds’ championship run.  He did get a short break around the holidays, representing Hockey Canada at the 2017 IIHF World Junior Championship. Besides that, Barzal kept the Thunderbirds flying high.

“Going back and playing with confidence, playing 25 minutes a night, and playing [power play], getting great opportunity and obviously on a great team winning a championship helps as well,” continued Barzal. “Going back [to the WHL], it allowed me to hone my offensive talents.”

Returning to Seattle also afforded Barzal one more season to play with one of his best friends, defenceman Ethan Bear. Bear’s recent call-up to the Edmonton Oilers just happened to coincide with Barzal’s trip out west, with eager television cameras capturing the pre-game meeting between the two while wearing different jerseys for their respective NHL clubs.

The pair were undoubtedly two of the key performers for the Thunderbirds in that aforementioned series against the Pats. Barzal, the WHL Playoffs MVP and Bear, the winner of the Bill Hunter Trophy as the WHL’s Top Defenceman in the 2016-17 campaign, were a dynamic duo that couldn’t be stopped.

“It was cool; it was the first time I’ve played against one of my best friends in the NHL,” Barzal said. “It’s just awesome to see him succeeding because he works hard. He deserves it.”

Now the responsibility to continue that winning tradition this season rests in the hands of those named Ottenbreit, Volcan, Neuls, Strand and so on down the roster.

As much as the WHL regular season and playoffs are a determining factor for who’ll move on and represent the league each year at the Mastercard Memorial Cup, the experience is one that best prepares players for succeeding in the professional hockey landscape and life.

Asked about the path he took on the route to bursting onto the NHL scene in his rookie year, Barzal wouldn’t have it any other way.

“It just made me into a pro, made me into a man,” he added. “Playing that 72-game schedule really helps translate into the NHL season. A lot of factors go into it.”

Now a professional hockey player and a man in both rights, Barzal’s WHL memories, like the Thunderbirds themselves, will continue to soar high with pride.