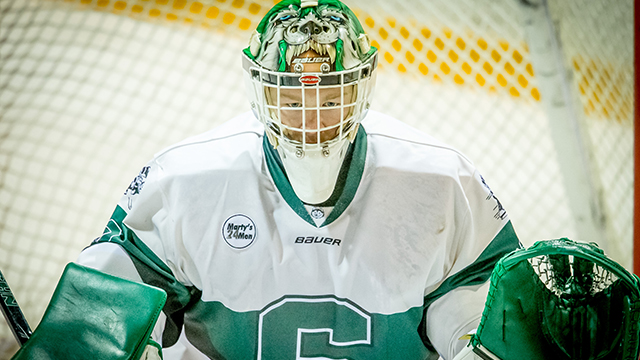 EDMONTON – There’s been an on-going theory in hockey over the last decade that goaltenders need to be a certain height to be successful.

Hockey scouts at all levels we’re looking for the big goaltender to be their back bone between the pipes — but a goalie’s size doesn’t always define their ability.

Throughout his career, Cooke has always had to answer questions about his small stature, but when the five-foot-10 netminder is handed the reigns, all he does is win.

“I always feel like I have something to prove. I know I’m short in stature, I know I’m a small goalie, but I can stop the puck,” said the Leduc native.

Dating back to his time with the Kelowna Rockets, Cooke played an integral role with one of the Western Hockey League’s most successful franchises.

He spent four years in Kelowna, his last two as the team’s starting goaltender, leading the WHL in victories over his time as the starter.

“My time in Kelowna was amazing… unforgettable. I have so many incredible memories,” said Cooke.

He was part of a Rockets team that made it to back-to-back WHL Western Conference Finals, before losing out to the powerhouse Portand Winterhawks in 2013 and 2014.

He also helped guide the Rockets to become one of just a handful of teams that have comeback from an 0-3 deficit in a playoff series to win, as the 2013 Rockets came back to beat the Seattle Thunderbirds in the Western Division semifinal series 4-3.

The Game 7 win came in overtime no less.

“Being on the ice and hearing the crowd roar when we scored the winner in OT… it was one of the greatest feelings. You’re part of history,” said Cooke.

After graduating from the Rockets in 2014, Cooke wanted nothing more than to pursue the pro hockey dream.

But, he didn’t get drafted, and no pro offers came along. 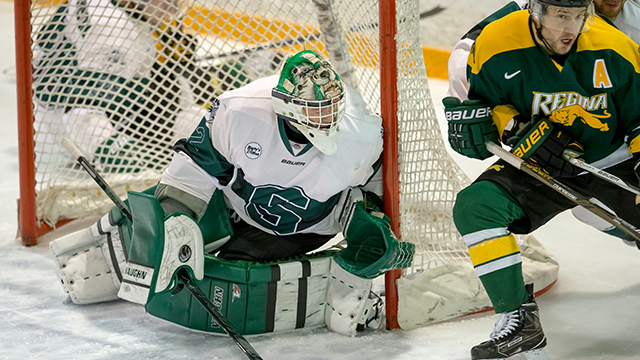 Once again, people we’re looking at his small stature and didn’t give him a shot at a pro contract despite the  the 76 wins, nine shutouts and loads of playoff experience he earned during his final two seasons with Kelowna.

“My size has always been my downfall, but the job of a goaltender is to stop the puck. I’m 5’10” and if I can stop the puck better than a guy who is 6’2”, then I feel I deserve the chance,” said Cooke.

“It’s not about your size and height, it’s about heart and commitment and getting those Ws. I’ve proven that when I take the reigns I’m a winner. I hate to lose.”

With the uncertainty of where his hockey path was going to take him, Cooke contemplated all his options, and eventually decided to use his WHL scholarship and join the Saskatchewan Huskies.

Cooke looked towards his future, and earning an education and playing for an outstanding program with the Huskies was a no-brainer.

“When you don’t get that opportunity to play pro, you have to think about what you’re going to do with your future,” said Cooke.

“I’m very lucky to come to a program and school that prioritizes being a student first and athlete second. In the back of my mind, I knew if I wasn’t going to play pro, I needed my schooling.”

Not only did Cooke learn from Holfeld on the ice, the Law student played an integral role in helping him adjust to life as a student.

“Ryan Holfeld was a big mentor for me. He taught me a lot about time management. If it wasn’t for him, I don’t know if I could excel in the classroom and on the ice like I have,” said Cooke.

“He was an amazing student-athlete. His name will always come up when you’re talking about great student-athletes. He took me and a lot of other young guys under his wing.”

Cooke took over the starting job last year for the Huskies and was a big factor in helping them finish in top spot in the Canada West conference for the first time since 2000 with a 22-6 record.

He led the conference with a 19-5 record and a 0.921 SV%, earning Canada West MVP and CIS Goaltender of the Year honours while leading the Huskies to their first conference title since 2012, before bowing out at the University Cup.

“Last year, was a huge breakthrough for our program. We finally beat the U of A (in the Canada West playoffs)… and to beat them two straight at home…that was a moment I’ll never forget,” said Cooke.

“But it was a season of mixed emotions. Nationals was an amazing experience for us, but falling short like we did… there’s been a fire in everyone’s gut.”

Cooke still has dreams of playing pro hockey, but right now he’s focused on another mission. Before he finishes his university hockey career, he wants to earn his degree and help the Huskies end their national championship drought.

Nearing the midway point of the Canada West season, the Huskies are tied for top spot with the University of Alberta in the conference.

“I’m blessed to have an amazing team in front of me. All four lines and all eight defenceman. We’re not always the most skilled team, but we’re the hardest working,” said Cooke.

“I believe it’s going to be soon. We have an unbelievable group of veterans and it’s only a matter of time.”

Then, when that’s all finished Cooke hopes to get the pro shot he’s been waiting for.

“My current goal is to get my degree and win a national championship. I’m in no rush to start my career. It’s always been a dream of mine to experience pro hockey, and if an opportunity develops —I will take it in stride and just continue to learn the game I love.”

To learn more about the WHL Scholarship Program, click here.