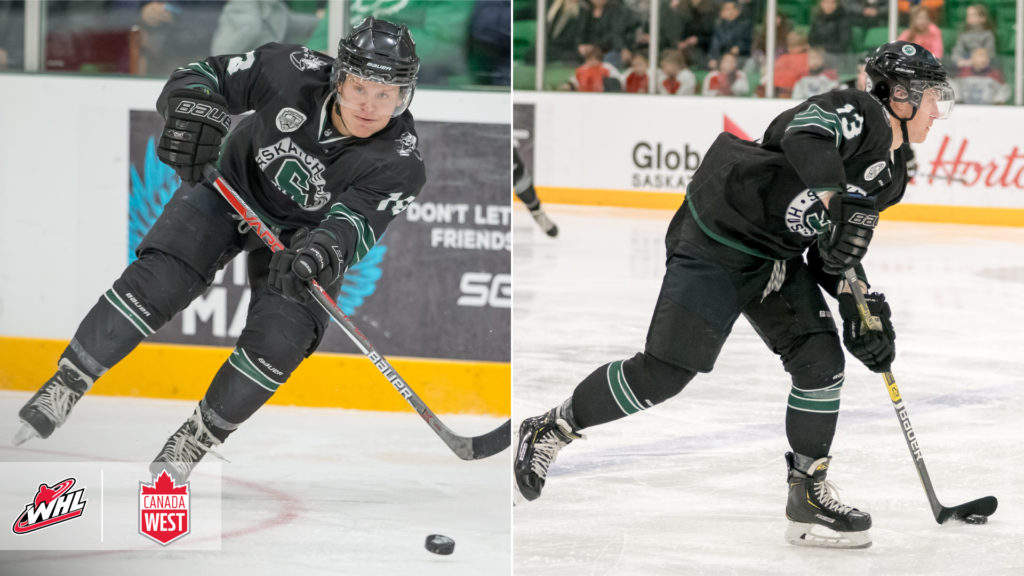 From March 14 to 17 in Lethbridge, Alta., 83 WHL Alumni will compete for U SPORTS supremacy at the 2019 Cavendish Farms University Cup. The WHL is represented with graduate players on all eight rosters of competing teams at the annual tournament, including 26 with the Canada West (CW) champion University of Alberta Golden Bears, 23 with the University of Saskatchewan Huskies and 17 with the host University of Lethbridge Pronghorns.

Not only have Saskatchewan Huskies forwards Jaimen Yakubowski and Carter Folk been playing together this season in Canada West (CW), they also have a bit of Western Hockey League history together as well.

Originally selected in the fourth round, 77th overall, by the Lethbridge Hurricanes in the 2009 WHL Bantam Draft, Yakubowski played three years for the Hurricanes before he moved on to join the Seattle Thunderbirds.

Two years behind Yakubowski, Folk was chosen in the fourth round, 84th overall by the Thunderbirds in the 2011 WHL Bantam Draft. During October 2013, the Hurricanes and Thunderbirds came together and struck a trade involving both Yakubowski and Folk. While the two players missed each other in Lethbridge, as it would happen, fate would bring them together to play for the Huskies.

“The first time I met him was when I came to the University of Saskatchewan (U of S) last year, and it was a funny thing we had between us and then the fact that we ended up playing on a line together was cool,” Folk said.

“I remember before the trade, I heard about him playing in Seattle and that he was an up-and-coming gritty player,” Yakubowski said of Folk. “We’re kind of similar players, so to get to finally meet him was pretty funny.”

During his time in Lethbridge, Yakubowski played 145 games, recording 79 points (49G-30A) and in his final season (2013-14), he was named an alternate captain for the Hurricanes. Playing in the WHL for another two years, Yakubowski finished his career as a Moose Jaw Warriors’ alternate captain, rounding out his total WHL games to 247 with 123 points (67G-56A).

After his junior career, the Dalmeny, Sask. product returned to his home province of Saskatchewan to utilize his WHL Scholarship at the U of S, also joining the men’s hockey team.

“My brother, who actually has down syndrome, he’s a waterboy for the Huskies and has been doing that for a while now so being able to come home to family as well as the Agriculture-Business program was a big draw for me,” Yakubowski said. “The WHL Scholarship has been unreal. Having the ability to pick a program that I liked and come out of junior without having to worry about tuition and textbook fees of any kind has taken a lot of weight off my back. Playing with some Junior A guys that don’t have that ability has shown me how lucky I am to have the scholarship program. It’s something that has really helped me both financially and towards my peace of mind.”

Yakubowski, a 5-foot-10, 205-pound forward has been described as a player that utilizes his body and brings a lot of energy to the game whether it be through blocking shots or handling penalty kills. Over his university career, Yakubowski has played in 79 games, earning 28 points (12G-16A) and has participated in three University Cups where he has recorded three points (1G-2A) in five games.

“The speed and skill is still there [in CW], guys still want to win every night and it’s very competitive,” Yakubowski said. “I feel that it’s a very underrated league in Canada that people are slowly starting to notice.”

This year, Yakubowski and the Huskies will be looking for redemption as they were defeated by their CW archrival – the Alberta Golden Bears – in the semifinal of last year’s University Cup in Fredericton, N.B. Returning to Lethbridge, the town where Yakubowksi’s junior career began, he’s hoping it will bring some luck.

“I loved playing in Lethbridge when I was there,” Yakubowski said. “It’s exciting to go back to the Enmax Centre where I began my career and had some really big nights there that I’ll never forget. It would be unreal to bring a championship back from my old stomping grounds.”

Filling his now-teammate’s place in Lethbridge back in 2013, Folk went on to play three seasons as a member of the Hurricanes, skating in 171 games and recording 61 points (26G-35A). In just his second season with Lethbridge, Folk was named an alternate captain and carried the role for the following year before joining the Victoria Royals in 2016-17 where he was also an alternate captain for his last season in the WHL. Playing in 246 WHL games, Folk earned 79 points (33G-46A) before joining the Huskies in 2017-18.

Returning to his home province was always a priority for Folk. He wanted to go to school for an Agriculture-Business degree, a program the U of S is well-known for. But there was a slight snag, the Huskies roster was full for the 2017-18 year.

“I knew what the deal was going to be, we had a deep group,” Folk said. “I came for the program and because of my interest in school, so it allowed me to get the school aspect under my feet. I’ve been enjoying my program and it’s given me the opportunity to try out a bit of work in the agriculture industry this past summer.

“A lot of us [former WHL players] don’t consider ourselves regular university students because we get to go to school, continue to play hockey and not have to worry about financial costs because of the WHL Scholarship program. It’s an unbelievable opportunity that we are able to be a part of as well as a good incentive to get guys to continue their education and hockey careers.”

This year, Folk has made a spot for himself in the Huskies lineup, playing on a line with Yakubowski. Folk has played in 21 games and notched 10 points (3G-7A) including one shorthanded marker in the regular season, adding one more goal to his totals in the playoffs against the University of Alberta.

“The CW doesn’t get enough credit,” Folk said. “If the goal is to play in the NHL and you don’t make it, [Canada West] can be looked at as a lesser option. In coming here [to U of S] and seeing how good the level is, you can see we have four solid lines, eight solid defencemen and two great goalies. There are no weak spots on the team.”

Similar to Yakubowski, Folk is excited to be back in Lethbridge for the University Cup.

“I am very excited,” Folk said. “I built a lot of good relationships [in Lethbridge] like my billets who are still a part of the Hurricanes organization. Whenever I get to go back to Lethbridge, it’s always a good experience and I’m hoping we can put ourselves in a position to win a national championship.”

Michael Sofillas joins Yakubowski and Folk to round out the crew of former Hurricanes on the Huskies roster, having skated in Lethbridge from 2009-10 to 2012-13.

In CW action, the Huskies posted a program-best 28-5-0 record this year, earning their way into the University Cup. Throughout the season, former Kamloops Blazers and Seattle Thunderbirds’ goaltender Taran Kozun also set four new CW regular season records: most consecutive shutouts (3), longest shutout streak (267:53), shutouts in a season (5) and wins (20). Although they are up against stiff competition, the Huskies may be able to jump above their supposed ranking in the tournament with help from their strong goaltending and their previous winning record from earlier in the season.

Seeded in the fifth position, the Huskies will face the Guelph Gryphons, who are ranked fourth in the tournament, in the first game of the University Cup at on Thursday, March 14 (1 p.m. MT) at the Enmax Centre. This will mark the Huskies’ 25th appearance in the national championship tournament.