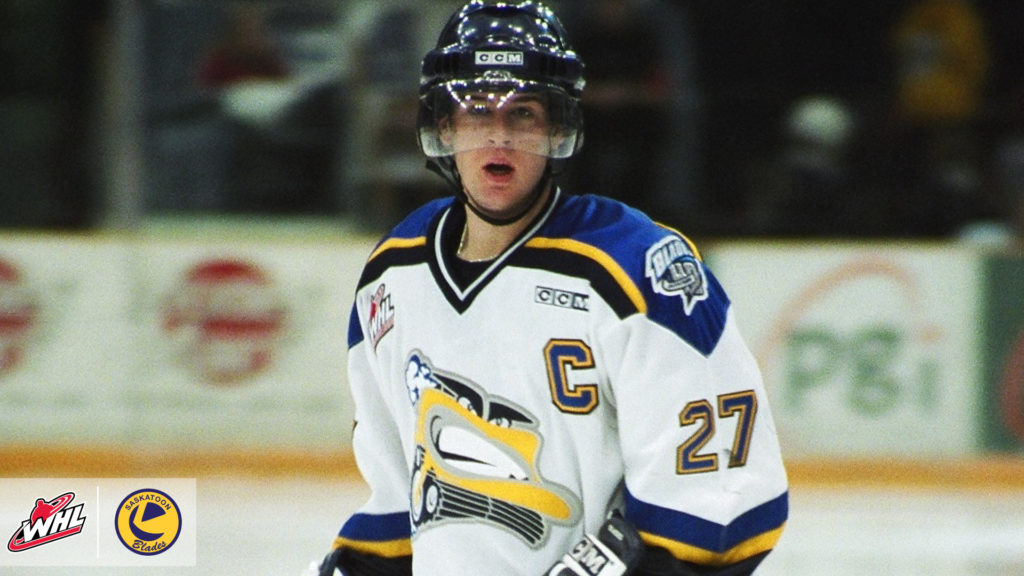 After 15 seasons in the NHL, defenceman Mike Green announced his retirement from professional hockey.

The 34-year-old native of Calgary, Alta., was an instrumental force on the Blades’ backend from 2001-02 through 2004-05. After recording 39 points (14G-15A) in 59 games, Green joined the CHL Top Prospects squad in 2004 and was marked as a standout among NHL prospects, ultimately leading to the Washington Capitals’ selecting Green in the first-round, 29th overall, in the 2004 NHL Entry Draft.

Solidifying the Capitals’ decision, Green doubled his assists in the following season with the Blades, tallying 66 points (14G-52A) in 2004-05. Once again Green played in the CHL Top Prospects roster, this time recording one assist. Accolades continued to flow for Green that season as he was named to the WHL’s Eastern Conference First-All Star team and earned the most assists and most points by a defenceman across the league.

Playing between the Capitals and their AHL affiliate team, the Hershey Bears, from 2005-06 through 2006-07, Green put in a solid performance as a rookie in both leagues. He was also named to the 2007 NHL Young Stars Game, playing for the Eastern Conference where he registered three assists. In 2007-08, Green made the jump to the big leagues permanently, emerging as an elite offensive NHL defenceman with the Capitals.

That year, Green debuted internationally for Team Canada at the 2008 IIHF World Championship recording 12 points (4G-8A) in eight games, earning a silver medal in the tournament. For his efforts, Green was named to the Tournament All-Star Team.

During the 2008-09 season, Green scored a career-high 31 goals in 68 games with Washington. In the following season, he recorded 76 points (19G-57A) in 75 games finishing as a Norris Trophy finalist for the second straight year.

A veteran of 880 NHL games with the Washington Capitals, Detroit Red Wings and Edmonton Oilers, Green posted 501 points (150G-351A) during his career.

In his retirement announcement with The Athletic, Green is looking towards the future stating he wants, “to use [his] voice in a different way. [He wants] to focus [his] energy differently, ground [himself] in the community, in family. But [he] also wants to become a change agent for good.”

One of the best to ever wear the C is hanging it up.

Congratulations to Mike Green (@GreenLife52) on a tremendous career. We're proud to call you a member of the Blades family 💛💙 pic.twitter.com/LBsimYRh0L

Congrats, @GreenLife52, on your @NHL career & we wish you well in your future endeavours. https://t.co/ZxIDOzcP8W

Thank you for your time in Detroit and the impact you made on and off the ice. We know you will succeed in all your future endeavors. #LGRW pic.twitter.com/a0VesVSrTm

After 15 seasons in the League, Mike Green (@GreenLife52) has announced his retirement.