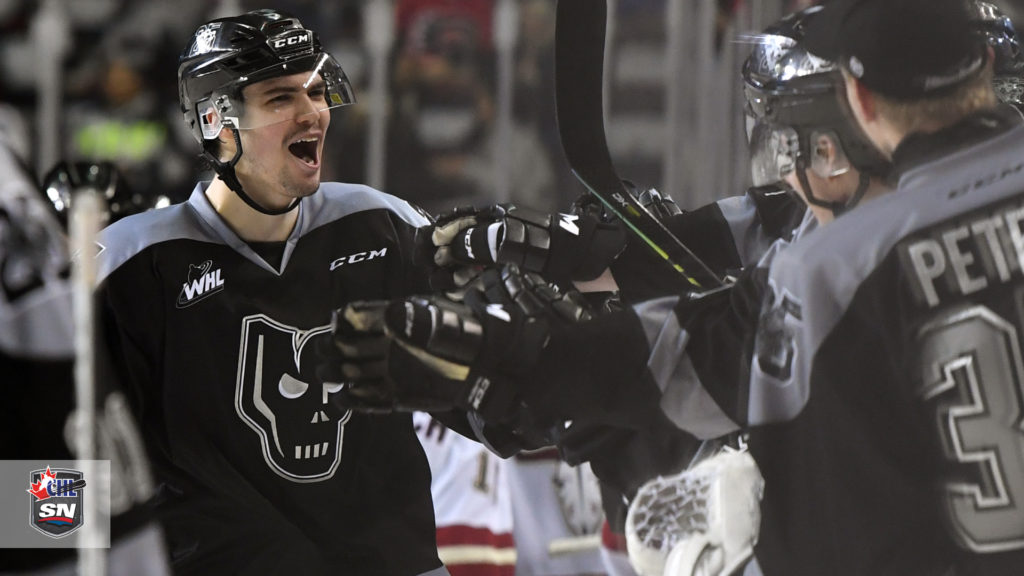 From one extreme to the other. It’s how life in the Central Division and Western Hockey League’s Eastern Conference can be these days.

Case in point, the Hitmen went from being on the losing side of a shutout Friday against the Brandon Wheat Kings to silencing the visiting Red Deer Rebels 5-0 in Canadian Hockey League action on Sportsnet Saturday afternoon.

Connor Gabruch’s second goal with the Hitmen stood up as the game-winning goal in the contest while Vancouver Canucks prospect Carson Focht and defenceman Jackson van de Leest each scored twice.

2020 NHL Draft prospect Jack McNaughton turned aside 14 shots for the third shutout of his WHL career.

The Hitmen struck early into the first period as they worked the puck on the rush from Focht at the sideboards to Cael Zimmerman down low. From there, Zimmerman fed it into the slot for defenceman Dakota Krebs, who cut to the outside and centred the puck for Gabruch, who was in the right spot to redirect the puck, making it a 1-0 game.

Doubling their lead on the power play in the second, Toronto Maple Leafs prospect Riley Stotts found Focht across the ice and fed him a perfect pass. The Regina, Sask. product adjusted and sent a mid-level shot that caught the far goal post and banked the right way to make it 2-0.

Extending the lead to three in the third, Focht used his sharp-shooting skills from a similar area at the other end of the ice, taking a pass from Orca Wiesblatt and wiring home his 24th of the season.

Just as the Rebels had finished killing off a penalty, van de Leest joined the scoring action with a blast from the point. Back on the ice 94 seconds later, the 6-foot-7 defenceman tried his luck with another blast, with the puck finding its way through traffic to find the back of the net.

After stopping six shots in the first and four in the second, McNaughton faced just four more shots in the third.

Canucks prospect Jett Woo and Wiesblatt each finished with a pair of helpers in the win while five other Hitmen skaters picked up an assist in the contest.

The Hitmen will host the Prince Albert Raiders next on Friday, February 7 (7:00 p.m. MT) before they renew their rivalry with the Rebels next Saturday at Westerner Park Centrium.