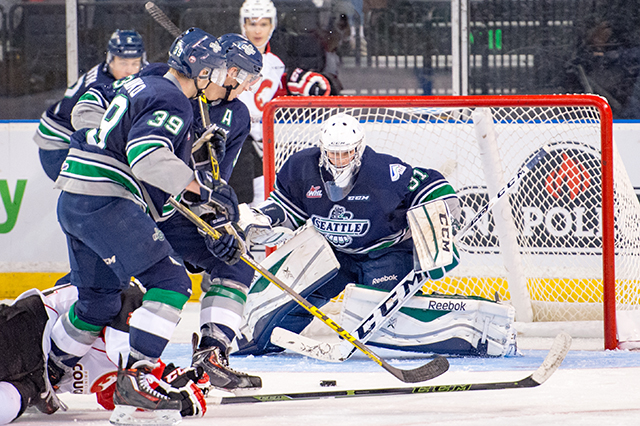 Logan Flodell is heading back to the Land of Living Skies.

A day after bringing in 20-year-old Rylan Toth via trade with the Red Deer Rebels, the Seattle Thunderbirds turned around and dealt the 19-year-old Flodell – a native of Regina – to the Saskatoon Blades in exchange for 18-year-old defenceman Anthony Bishop.

“Logan is an athletic and skilled goaltender who will provide us with a solid veteran tandem going forward this year,” said Colin Priestner, general manager for the Blades, in a team release. “We believe him and Brock Hamm will give us a chance to win each night and he will provide us with key experience coming from a great program in Seattle.”

Flodell was originally a third round pick (47th) of the Thunderbirds at the 2012 WHL Bantam Draft.

“We wanted to find a good opportunity for Logan Flodell and with the issue that developed with Jared Pelechaty’s health, we were left with a big hole on our defense,” said Russ Farwell, general manager of the Thunderbirds, in a team release. “This move accomplished both of those objectives.”

On the flip side of the transaction is Bishop, a 5-foot-11, 181-pound product of Kelowna.

The 2015-16 campaign served as Bishop’s rookie season in the Western Hockey League, where he skated in 40 games, registering two assists and 21 penalty minutes. In five pre-season games with the Blades this fall, Bishop has collected four assists.

“Anthony missed some time due to injury last year, but we think he can fill our need for depth on defense,” Farwell said. “He is a puck-moving defenceman who also plays with some bite to his game, which is always welcome.”

In Pelechaty, the Thunderbirds lost a promising 17-year-old blueliner, who was forced to retire from hockey due to on-going health concerns. The product of Winnipeg dressed in nine games with Seattle in 2015-16, registering one goal. He was set to break into a full-time position with the club this coming season.

“Hockey has been a huge part of my life for a long time,” Pelechaty said in a statement released Sept. 9 via his Twitter account. “It’s sad that it had to end like this but there are good things to take from it… I’m so grateful for the things hockey has taught me as a person, and know it will help me in the future.”

Bishop will look to fill that hole, joining veterans Turner Ottenbreit, Bryan Allbee, Brandon Schuldhaus and Ethan Bear, amongst others, on the Thunderbirds blueline.

Would like to thank @BladesHockey for everything! Best of luck this year. Excited to get things started with @SeattleTbirds

Back north in Saskatoon, Flodell will combine with the 19-year-old Hamm to form the Blades puck-stopping duo.