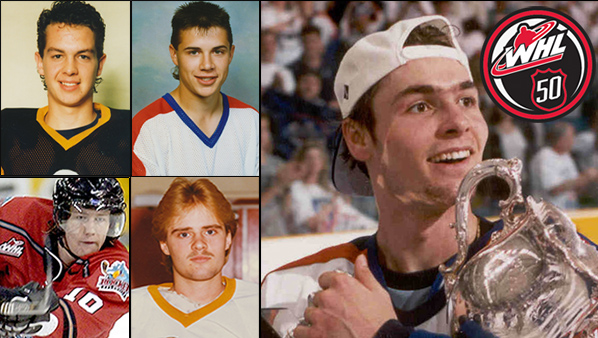 Calgary, AB – As part of the Western Hockey League’s 50th Season celebrations, a panel of historians selected the top 125 players in WHL history this past September. From this list, WHL fans voted at Top50.whl.ca to select the Top 50 WHL Players of All-Time. This week, the fan and panel voting revealed the following placements:

Barnes eclipsed the 100-point plateau in each of the three seasons that he played for the New Westminster Bruins/Tri-City Americans franchise from 1987-90. In his first season in the league with the Bruins, Barnes received the Jim Piggott Memorial Trophy as the WHL’s  Rookie of the Year. His 101 points (37g-64a) in 71 games that year were third amongst freshman players that season. The following campaign, the Bruins relocated and became the Tri-City Americans. Barnes was named the 1988-89 WHL Player of the Year as he finished second in league scoring with 141 points (59g-82a) in 70 games. For the second straight year, Barnes collected a WHL Western Conference second team all-star nod. In 1989-90, Barnes racked up 144 points (52g-92a) in 63 games, which ranked seventh in WHL scoring. The product of Spruce Grove, AB also captured a gold medal for Team Canada at the 1990 IIHF World Junior Championship.

Over his WHL career, Barnes registered 386 points (148g-238a) in 204 regular season games and tallied 22 points (9g-13a) in 19 playoff appearances. After being chosen in the first round, fourth overall, by the Winnipeg Jets in the 1989 NHL Draft, Barnes played in the NHL for 16 seasons.

When Barnes retired from the NHL in 2008, he had accumulated 597 points (261g-336a) in 1136 regular season games and notched 62 postseason points (30g-32a) in 116 matches. Barnes was a member of the Winnipeg Jets, Florida Panthers, Pittsburgh Penguins, Buffalo Sabres and Dallas Stars.

The 45-year-old is currently a skills coach with the Okanagan Hockey Academy and in 2005 he became a part owner of the Tri-City Americans along with fellow Americans alumnus Olaf Kolzig.

Whitney was a member of the Spokane Chiefs from 1988-91 and topped the century mark in points in two of those three seasons. In 1990-91, Whitney earned the Four Broncos Memorial Trophy as the WHL Player of the Year and the Bob Clarke Trophy as the Top Scorer in the WHL. His 185 points (67g-118a) in 72 games is tied for seventh all-time for the most points in a season. The Western Conference All-Star guided the Chiefs to a WHL Championship with a league-best 31 points (13g-18a) in the playoffs. Whitney capped off an exceptional year by hoisting the Memorial Cup. After an 11-point performance (5g-6a) in the tournament, Whitney received the George Parsons Trophy as the Most Sportsmanlike Player and was named to the Memorial Cup All-Star Team.

Throughout his WHL career, Whitney accumulated 348 points (141g-207a) in 214 regular season games which is a Spokane Chiefs record. In addition, Whitney netted 38 points (16g-22a) in 21 playoff appearances. After being selected in the second round by the San Jose Sharks in the 1991 NHL Draft, Whitney had a long and distinguished career in the NHL.

The Fort Saskatchewan, AB native played 21 seasons in the NHL for eight different teams. In 2006, Whitney won the Stanley Cup with the Carolina Hurricanes. When Whitney hung up his skates, he had collected 1064 points (385g-679a) in 1330 regular season games and amassed 53 playoff points (21g-32a) in 108 contests. The 43-year-old joined the professional scouting staff of the Hurricanes after his retirement in 2015 and recently saw his number retired by the Chiefs.

Tucker was a member of the Kamloops Blazers from 1991-95. His prolific junior career was highlighted by winning three Memorial Cup titles in four years, something that only the Blazers have done. The Blazers picked up their first of three WHL Championships and Memorial Cups in in 1992 when Tucker was a 16-year old rookie. In 1993-94, after finishing second in league scoring with 140 points (52a-88a) in 66 games, Tucker was selected as a CHL First Team All-Star. Tucker led the Blazers to a WHL Championship as he recorded a league-best 27 postseason points (9g-18a). The Blazers then hoisted the Memorial Cup on the back of Tucker’s MVP performance that earned Tucker the Stafford Smythe Memorial Trophy.

In his final campaign as a Blazer, the Castor, AB native was given the captaincy. In a repeat performance of the previous season, Tucker placed second again in WHL scoring with 137 points (64g-73a) in 64 games and led the playoffs in scoring again with 31 points (16g-15a). Tucker was selected as a WHL Western Conference First Team All-Star and a Memorial Cup All-Star for the second consecutive year. The Blazers claimed back-to-back WHL Championships as well as two straight Memorial Cups. Success also translated to the international stage as Tucker added a gold medal at the 1995 IIHF World Junior Championship with Team Canada to his trophy case.

Throughout his WHL career, Tucker collected 379 points (150g-229a) in 223 regular season games and notched 72 points (32g-40a) in 62 playoff appearances. After the Montreal Canadiens selected Tucker in the sixth round of the 1993 NHL Draft, Tucker enjoyed a 13-year career in the NHL.

Tucker had a great start to his pro career with the Fredericton Canadiens. He received the Red Garrett Memorial Award as the AHL Rookie of the Year in 1995-96. He then played for the Montreal Canadiens, Tampa Bay Lightning, Toronto Maple Leafs and Colorado Avalanche. When Tucker retired from the NHL in 2010, he had amassed 476 points (215g-261a) in 947 regular season games and added 21 playoff points (10g-11a) in 68 matches.

Keith played just one season in the WHL in 2002-03. As a 19-year old, Keith supplied 46 points (11g-35a) along with a plus-32 rating in 37 regular season games from the backend. Even though his campaign was abbreviated, Keith still made a difference as he finished second among rookie defenceman in points. Keith manned the blueline along with the likes of Josh Gorges and Shea Weber to lead the Rockets to their first WHL Championship in franchise history. In the postseason, Keith recorded 14 points (3g-11a) in 19 games.

Rockets’ Director of Player Personnel Lorne Frey discovered Keith after he went undrafted in the WHL Bantam Draft and Keith joined the pipeline of defencemen that the Rockets have developed throughout the years. A second round draft pick of the Chicago Blackhawks in 2002, Keith has played his entire 11-year NHL career with the Blackhawks.

The 32-year-old defenceman is part of the core of the Blackhawks that have won three Stanley Cups in a six-year span (2010, 2013 and 2015). Keith led the way in the latest run in the 2015 NHL playoffs with a Most Valuable Player performance to earn the Conn Smythe Trophy. In 2009-10 and 2013-14, Keith received the James Norris Memorial Trophy as the best defenceman in the NHL. The Winnipeg, MB native is a two-time Olympic Gold Medalist for Team Canada in 2010 and 2014 and also won a silver medal at the 2008 IIHF World Championship.

Ronning spent two seasons in the WHL from 1983-85 as a member of the New Westminster Bruins. In his 18-year-old season, Ronning took the league by storm and was selected as the 1983-84 WHL Rookie of the Year. He placed seventh in league scoring with 136 points (69g-67a) in 71 games and received a WHL Western Conference second team all-star nod. The following season, Ronning received numerous accolades after a historic campaign. Ronning was named the WHL’s Most Valuable Player, the WHL Top Scorer and the WHL Most Sportsmanlike Player as well as a WHL Western Conference First Team All-Star. His astonishing 197 points (89g-108a) in 70 games ranks second all-time for the most points in a season. This remarkable campaign was highlighted by Ronning potting 27 goals over a WHL-record 18-game goal scoring streak.

The native of Burnaby, BC, was a member of seven different teams including his hometown Vancouver Canucks. When Ronning retired in 2006, he had accumulated 869 points (306g-563a) in 1137 regular season games and registered 86 playoff points (29g-57a) in 126 contests. Ronning also won a silver medal for Team Canada at the 1991 IIHF World Championship.