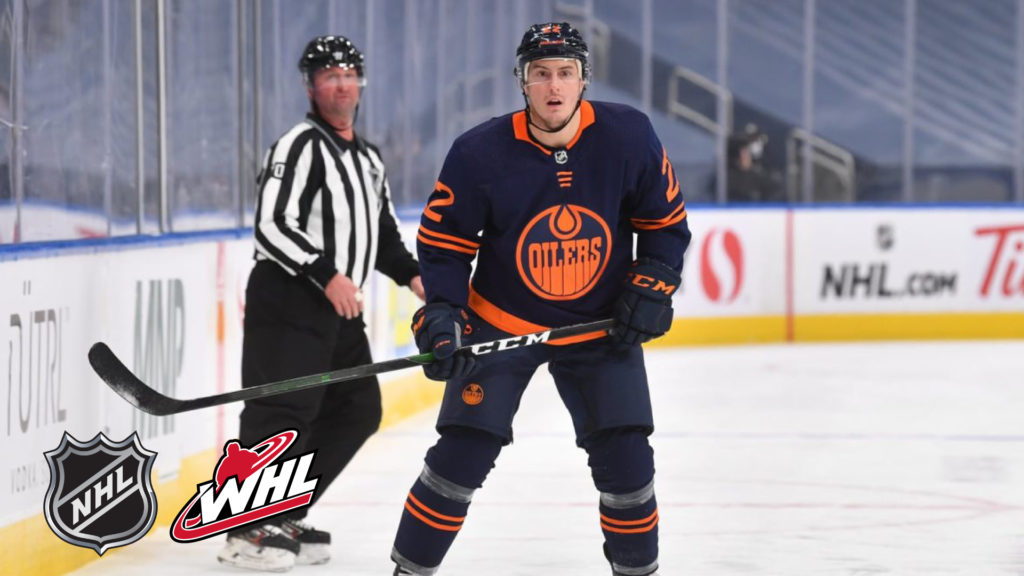 This NHL offseason was like none other. Due to the COVID-19 pandemic, teams went into an offseason with plenty unknown, which had a direct effect on the offseason movement. This season 23 WHL Alumni have started this season on different teams, while 35 alumni moved around last season. We will dive into each NHL Division, viewing the WHL Alumni who start a new path in their careers with different teams. This week we start with the Honda West Division.

The 2010 Bill Hunter Award recipient (Top Defencemen in WHL) and 2009 WHL Champion with the Kelowna Rockets, has made his way back west to join the Edmonton Oilers. Tyson Barrie is in his tenth season in the NHL, spending the first eight seasons of his career with the Colorado Avalanche, and last season with the Toronto Maple Leafs. The former Rockets captain signed a one-year contract with the Edmonton Oilers this season, looking to regain his 0.80 points per game form.

After spending 4 seasons with the St. Louis Blues, Joel Edmundson was traded to the Carolina Hurricanes along with Dominik Bokk and a seventh-round pick in 2021 in exchange for Justin Faulk and a firth-round pick in 2020. Edmundson recorded 19 points in his season with Carolina, setting a career high. As a pending unrestricted free agent, he was traded to the Montreal Canadiens and signed a four-year contract. Edmundson played four seasons in the WHL for the Moose Jaw Warriors and was traded in his final year to the Kamloops Blazers. Montreal hopes to see that same defensive toughness he brought in junior along with the Stanley Cup experience he has winning it with St. Louis.

Braden Holtby had an impressive junior career posting a 2.74 save percentage along with .909 goals against average in his final two seasons as well as being named a WHL All-Star. He continued his development with the Washington Capitals organization, coming in for relief of starters Thomas Vokoun and Michal Neuvirth in the 2012 playoffs. The 2012 playoffs were Holtby’s Lou Gehrig moment and six years later he helped the Capitals win their first Stanley Cup in 2018. Holtby signed a two year deal this offseason with the Vancouver Canucks as Jacob Markstrom’s replacement and mentor to up and comer Thatcher Demko.

The hard-nosed two-way defensemen out of Manitoba has found a new home in Vancouver. Going from three seasons with the Moose Jaw Warriors, then being named to the CHL Memorial Cup All-Star team with the Brandon Wheat Kings; Hamonic started his career as one of New York Islanders most reliable defensemen. He was then traded to the Calgary Flames along with a fourth-round draft pick, in exchange for a 2018 first and second round pick, as well as a third in 2019. He spent three seasons with the Flames and was the recipient of the NHL Foundation Player Award in 2017. This off-season, Hamonic signed a professional tryout with the Vancouver Canucks, who wound up awarding him a one-year contract with the team after an impressive camp.

Newly minted Stanley Cup Champion Braydon Coburn was traded to the Ottawa Senators along with Cedric Paquette and a 2022 second round draft pick in exchange for Anders Nilsson and Marion Gaborik. The former WHL Rookie and Humanitarian of the Year was a top player in the CHL, playing 238 games with the Portland Winterhawks and winning World Junior Gold (2004) and Silver (2003) for team Canada.

Seattle Thunderbirds Alumni Nate Thompson has played in his fair share of hockey markets. Initially drafted by the Boston Bruins in 2003, Thompson was picked up via waiver by the New York Islanders. Playing two seasons with the Islanders and finally getting his shot at NHL minutes, he found his way back on waivers and picked up by the Tampa Bay Lightning. Tampa was Thompsons longest stint with a team lasting five seasons before being traded to the Anaheim Ducks in exchange for two draft pics in 2015. After three seasons, he entered the free agent market joining his former Tampa Bay coach, Guy Boucher, in Ottawa; but then was later traded to the LA Kings as apart of the Dion Phaneuf deal. In 2019, he was then dealt to the Montreal Canadiens in a deal involving two draft picks. Performing well as a fourth line center on a struggling Canadiens team, Thompson finished the season with the Flyers after being traded for a fifth-round draft pick. As free agent this offseason, Thompson came back to Canada signing with the Winnipeg Jets for one-year; making that his ninth NHL team.