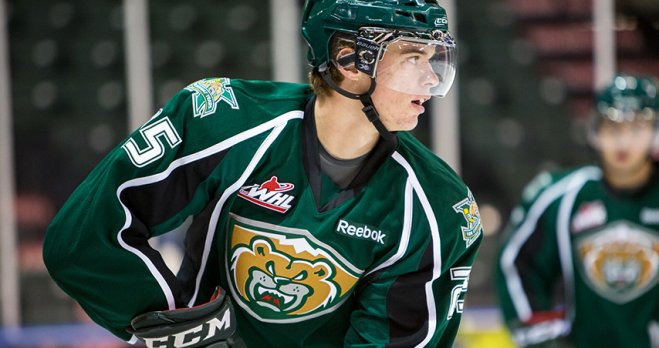 EVERETT – The Everett Silvertips made a pair of roster moves today to coincide with the return of defenseman Mirco Mueller from the San Jose Sharks – with whom he signed a contract Sunday – and forward Jujhar Khaira from the Edmonton Oilers.  In order to reach the CHL-mandated roster maximum of two Import players, the club has released forward Waltteri Hopponen.  The Silvertips have also re-assigned forward Ty Mappin to the Alberta Junior Hockey League.

Mueller returns to Everett after spending nearly three weeks with the Sharks, first at the Young Stars Classic rookie tournament in Penticton, BC and then at main training camp in San Jose.  Selected with the 18th overall pick in this year’s NHL Draft in New Jersey, Mueller then signed an entry-level NHL contract with the Sharks before being re-assigned to the Silvertips on Sunday.

Khaira also skated in the Young Stars tournament and then continued his NHL stay at main training camp in Edmonton.  He made his preseason debut for the Oilers Saturday night, earning a primary assist on a Nail Yakupov goal and posting two shots on net in Edmonton’s 5-2 win over Vancouver.  Selected by the Oilers in the third round (63rd overall) of the 2012 NHL Entry Draft, Khaira left Michigan Tech University this summer to sign his entry-level contract with Edmonton.  Everett acquired the WHL rights to the Surrey, BC native in a trade with Prince George during the 2012 WHL Bantam Draft.

Mappin will spend his 17-year-old season at the Junior-A level with a club yet to be determined in the Alberta Junior Hockey League.  The Big Valley, Alberta native recorded 17 points on five goals and 12 assists in 63 appearances with the Silvertips during his rookie WHL season last year.

Following their 8-3 opening night win over Prince George Saturday night at Comcast Arena, the Silvertips resume action Friday with their first road game of the season against the Vancouver Giants.  Opening face-off is set for 7:30 pm at Pacific Coliseum, with radio broadcast coverage starting at 7:00 pm on Classic Country AM 1520 KXA.  The ‘Tips return to Everett for a three-game homestand next week, hosting Kelowna, Tri-City and Spokane next Wednesday, Friday and Saturday.