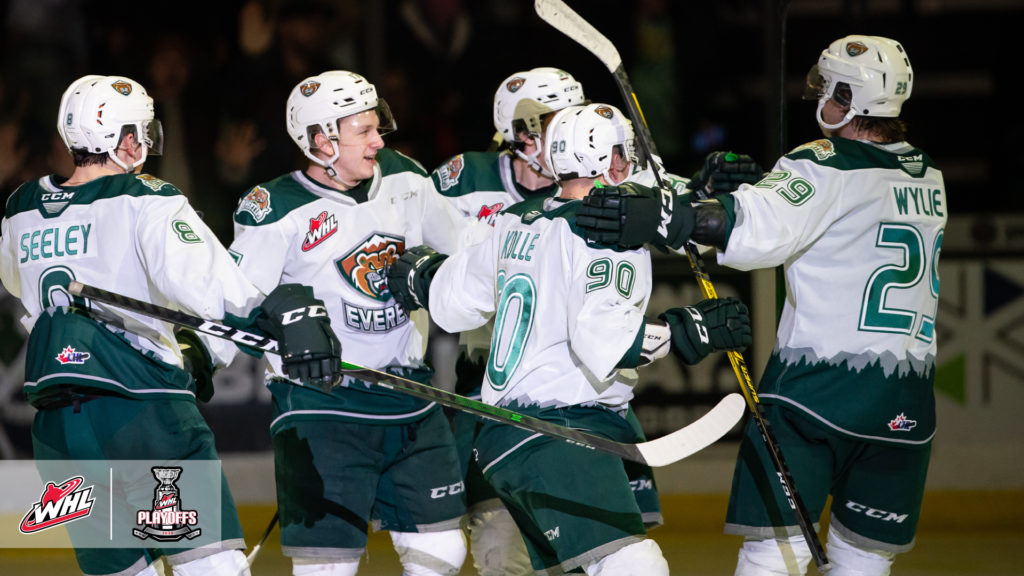 It’s a great day to be the Everett Silvertips.

The U.S. Division club officially booked their spot in the 2020 Western Hockey League Playoffs Friday night thanks to a 2-1 win against the Seattle Thunderbirds on home ice.

As a result, the Silvertips have 35 wins and 74 points in the WHL’s Western Conference standings. The idle Prince George Cougars, who rank third in the Wild Card race, can only achieve a maximum of 33 wins and 73 points by the end of the 2019-20 WHL Regular Season.

The playoff appearance is the 17th in the Silvertips’ 17-year history in the WHL. They’re also in the midst of chasing down the Portland Winterhawks to try and claim their fourth-straight U.S. Division title.

Maintaining what has made them successful in recent years has kept the Silvertips among the league’s best once again as their high-octane offence and stifling defence have taken down opponent after opponent.

Captain Bryce Kindopp has followed up last season’s 39-goal output with 33 goals through 51 games, including the game-winning goal in Friday’s clinching effort. Montreal Canadiens prospect Cole Fonstad has also provided them with a boost this season, tallying 55 points (11G-44A) in 39 games since being acquired by the Silvertips in October 2019.

Gage Goncalves has also boosted his stock for the 2020 NHL Draft while aiding the Silvertips push for the playoffs. A breakout 55-point (27G-28A) campaign in 48 games has the Mission, B.C. product thriving at the right time.

As usual, the Silvertips’ blue line has been one of their strengths as well. The duo of Philadelphia Flyers prospect Wyatte Wylie and Jake Christiansen have posted 49 points (12G-37A) and 39 points (17G-22A) respectively. The Silvertips have currently conceded 123 goals against through 51 games.

Between the pipes, Calgary Flames prospect Dustin Wolf has continued to impress, posting a 26-9-2-0 record, 1.93 goals-against average, 0.936 save percentage, and eight shutouts.

Three teams have now secured their spot in the 2020 WHL Playoffs, including the Portland Winterhawks, Edmonton Oil Kings, and Silvertips.

Everett returns to action on Saturday, February 15 (7:05 p.m. PT) when they host the Portland Winterhawks at Angel of the Winds Arena.