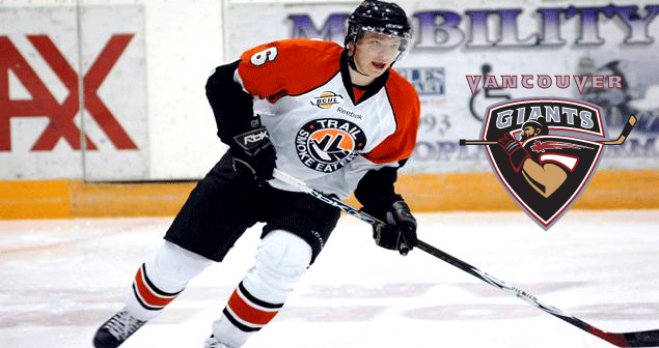 Vancouver Giants Executive Vice-President and General Manager Scott Bonner is pleased to announce the addition of defenseman Eric Walker to the Vancouver Giants roster. The 18 year old is a native of Castlegar, BC and stands 6’2, 200.

The Vancouver Giants originally listed Walker when he went undrafted in the 2008 WHL Bantam Draft. He spent the past two seasons playing with the Trail Smoke Eaters of the BCHL and accepted a full scholarship to play at the University of Northern Michigan. He joined the program this fall, however did not see any game action in the team’s first 12 games of the season, so he decided to return to British Columbia and join the Giants.

“It was a tough decision to leave Northern Michigan, but I realized at this point in my career the best place to be with regards to my development is the Western Hockey League,” said Walker. “I’m thrilled to be returning to my home province and I can’t wait to get started.”

“Eric is an extremely strong, physical blueliner, whom I believe will add more grit to our club, which in turn gains respect for your team,” said Bonner. “We are very excited he chose to return to BC and join our club.”

Walker will join the team immediately and be available to play Sunday night vs. the Kootenay Ice.