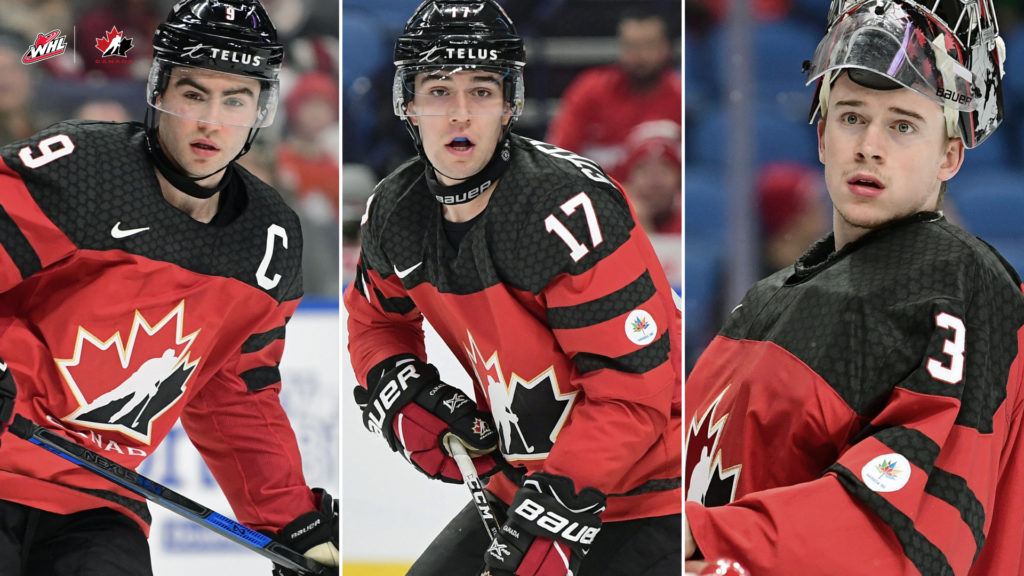 Calgary, Alta. – The Western Hockey League is proud to recognize eight players returning from the 2018 IIHF World Junior Championship with gold as members of Team Canada, following a 3-1 victory over Sweden Friday evening at the KeyBank Center in Buffalo, N.Y.

Dube opened the scoring 1:49 into the second period. After joining the rush on a two-on-two drive, Dube took the pass in the slot area and skated in on Sweden’s net with a defender draped around him. Dube created enough room in the limited space, sniping the puck top glove side on Swedish goaltender Filip Gustavsson for the game’s first goal.

Sweden would respond with a short-handed goal later in the period to even up the game after 40 minutes, keeping fans on the edge of their seats in another classic World Junior final.

Both teams fed off each other in the tight battle of Group Winners from the round-robin portion of the tournament, though it was Canada who’d find a way to get ahead late in the third. A point shot sent intentionally wide was sent Steenbergen’s way and the Broncos’ leading goal scorer this season made no mistake on tipping the shot past Gustavsson, lifting Canada to the top of the podium for a record 17th time. Canada would add an empty-net goal late in the game.

Canada’s goaltending situation was secure with Hart between the pipes as he joined a pair of other goaltenders for the most wins by a Canadian netminder at the tournament. He made 16 saves in the first, eight in the second and 11 more in the third to hold Sweden scoreless in the final period of the tournament.

Canada won Group A during preliminary action, skating to a record of 3-0-0-1, before defeating Switzerland in quarter-final play and the Czech Republic in semifinal competition.

WHL forwards enjoyed great individual success throughout the tournament, led by Sam Steel (4G-5A), Brett Howden (3G-4A), captain Dillon Dube (3G-2A) and Tyler Steenbergen (1G-1A), while defencemen Jake Bean (0G-3A), Cal Foote (0G-3A) and Kale Clague (0G-2A) also contributed from the blueline. Goaltender Carter Hart carried the bulk of the workload throughout the tournament, starting all games but one, registering a record of 5-0-0-1 with a 1.81 goals-against average, .930 save percentage and one shutout.

Each of Hart, Bean, Clague and Dube previously collected silver as members of Team Canada at the 2017 IIHF World Junior Championship in Montreal and Toronto.

For more information on Hockey Canada, Canada’s National Junior Team, and the 2018 IIHF World Junior Championship, visit HockeyCanada.ca or follow along via social media on Facebook and Twitter, as well as #WorldJuniors.